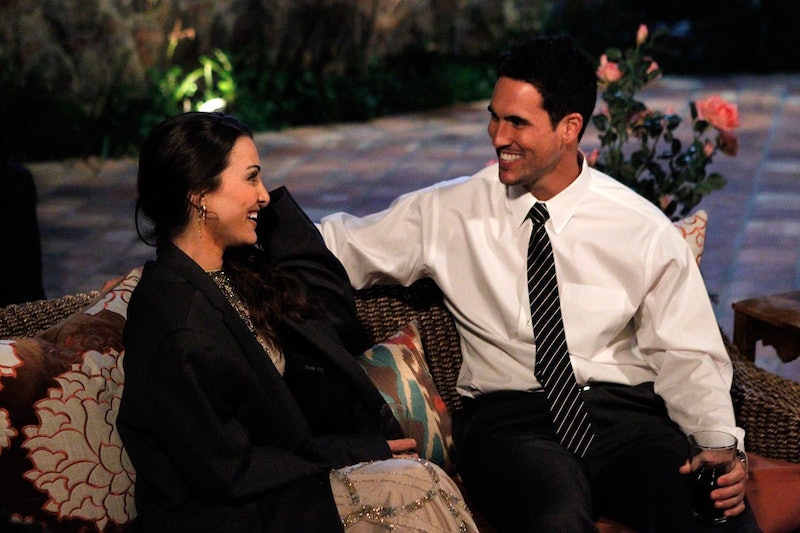 The secrets of The Bachelorette are just being spoiled left and right. First Nick Viall revealed he and Andi had sex in the Fantasy Suite (although, let's be real, we already knew that). Now former Bachelor Sean Lowe says you won't find your soul mate on the ABC show. It's a strong accusation to make, especially considering he met and later married Catherine Guidici, who was a contestant on his season. Sean isn't knocking the process altogether (only Juan Pablo dared to do that and he on the outs forever, now) but Sean is bringing some realness to your reality TV.

In an article titled, "Dear Andi, Josh Is Not Your Soul Mate" Sean blogged about what really happens when the cameras stop filming, and how hard it can be to keep a relationship going.

Nobody told Catherine and me that our toughest challenge would come after we rode those elephants off into the sunset. Falling in love while globetrotting the world was the easy part. Learning how to love someone you’ve spent a collective 20 hours with is the really hard part.

Andi and Josh's relationship also started out under extremely unusual conditions as they traveled through Europe and got engaged in the Dominican Republic.

According to Sean it takes work to remove yourself from that headspace and get on board with your partner outside the show.

It’s definitely taken work for Catherine and me. (Don’t tell me you’re surprised it took work to get this Texas former football player on the same page as the Seattle vegan graphic designer!)

To be fair, Andi and Josh both lived in Atlanta together, so they were able to spend a lot more time together after the show than most couples are. That's probably how they're able to jump to the moving-in-together stage so quickly. But still, Sean is right in pointing out how truly little time the couple gets to spend on the show alone.

The winner probably only gets about five one-on-one dates all season, and a handful of group dates. Those aren't the easiest conditions to get to know someone under. But Sean has advice for the new couple on navigating that time beyond the show's 20 hours.

The post-show/pre-marriage time frame will be one of the most challenging ... I’d tell them not to elevate the other to the level of “soul mate.” It sets everyone up for unrealistic expectations and emphasizes the romance over the hard work of building a relationship.

It's kind of shocking to hear such realistic advice from a former Bachelor, especially one whose "journey" worked out so well. But it's refreshing to hear that everything isn't always magical for the contestants, and that even Bachelor/Bachelorette couples have to work for their relationship. So thanks Sean, for breaking down the show's stereotypes a bit, and reminding Andi and Josh that after the rose ceremonies are done, not everything's going to come up roses—and sometimes that's okay.