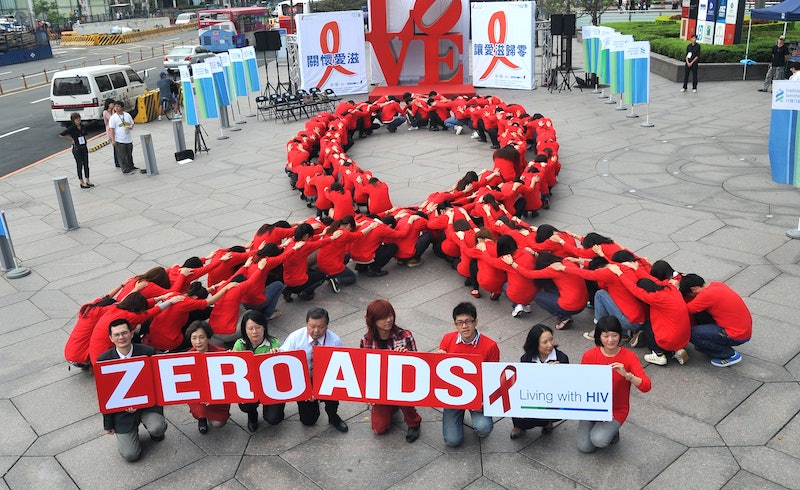 In the last 15 years, modern medicine has made a number of monumental breakthroughs that have revolutionized the healthcare industry, from mapping the human genome, to reducing heart disease deaths by 40 percent, to the long-term management of HIV. But in the next 15 years, Microsoft founder turned philanthropist Bill Gates predicts that an even greater leap will be made — by 2030, Gates says, an HIV vaccine will arrive. The advent of the science needed to develop such a drug would not only drastically reduce the number of new infections year over year, but would also have the potential to eliminate the need for lifelong treatments.

Speaking at the 2015 World Economic Forum in Davos, Gates expressed his optimism at the possibility of both a vaccine and a more intensive drug therapy that could fully eliminate the disease that has claimed millions of lives over the last three decades. "We’re pretty optimistic in this 15-year period we will get those two new tools," he noted, and further suggested that "the number of people getting treatment for HIV in sub-Saharan Africa would finally outstrip the number of new infections" were the vaccine to come into play. The Bill & Melinda Gates Foundation has devoted millions of dollars to medical research in order to achieve such ends since its inception in 2000, and if this latest effort succeeds, it would serve as a capstone achievement of one of the largest philanthropic organizations in the country.

This latest announcement came as part of the Gates' annual letter, which focuses on the topic of poverty alleviation around the world. And according to the power couple's predictions, the next decade and a half will witness a series of impressive and seemingly unprecedented advancements. The letter begins with a "big bet," claiming, "The lives of people in poor countries will improve faster in the next 15 years than at any other time in history. And their lives will improve more than anyone else’s." If this proves true, the worldwide economic and social climate will experience a leap forward like none before it, but of course, there are a number of hurdles that have yet to be overcome.

Chief among these include political instability, extreme socioeconomic inequity, and the prevalence of disease, particularly in less developed nations. But according to the Gates, these challenges may be addressed by way of four major improvements in health, farming, banking and education, or what the philanthropists deem to be the core tenets of progress.

In terms of health, Gates points to a marked decrease in the percentage of childhood mortality (a number which has been cut in half since 1990), as well as the eradication of several previously devastating diseases, including polio and smallpox within the last 25 years. But moving forward, the multi-billionaire believes that this can be achieved in nearly half the time, and has his sights set on malaria and HIV/AIDS.

According to the Microsoft founder, while the world might not "be able to completely eradicate malaria by 2030 ... we will have all the tools we need to do so." These tools, Gates says, "include a vaccine that prevents people with malaria from spreading it to the mosquitoes that bite them, a single-dose cure that clears the parasite completely out of peoples' bodies, and a diagnostic test that can reveal right away whether a person is infected." Already, many of these technologies are in a development stage, and within the next decade and a half, Gates firmly believes that malaria, a disease that still claims the lives of over one million individuals every year, will all but disappear.

But even more ambitious is Gates' plan to force "HIV to a tipping point," an endeavor with which the scientific community has been involved for the last several decades. Finally, however, medical improvements have placed this goal in sight, believes Gates. In their letter, the couple notes,

As we make progress toward a vaccine or a cure, the number of people beginning treatment in sub-Saharan Africa will finally outstrip the number of people newly infected. When we reach that point in the region with the most dense HIV transmission in the world, cases will start going down everywhere around the globe for the first time since the disease was discovered more than 30 years ago.

The Gates are not alone in their optimism. In 2009, a Thai trial involving over 16,000 volunteers became "the largest clinical trial ever conducted for a vaccine against HIV," as well as "the first to show any protection at all against infection." Since then, scientists have noted, the medical field has been "energized" with a new hope that there will indeed be not only a vaccine, but also a cure for the disease that was previously believed unstoppable.

But in spite of this notable progress, HIV remains an enormous problem worldwide, one that cannot be ignored nor taken lightly with the possibility of a vaccine. As of 2013, it was estimated that some 35 million individuals across the globe were living with AIDS, and 2.1 million new infections were reported that year. Moreover, according to UNAIDS, "for every person who began treatment for HIV last year, 1.3 people were newly infected."

Much of these infections stem from a lack of education or access to healthcare, major issues that must be addressed in tandem with the disease itself. These are issues the Gates Foundation recognizes, which is why their commitment to healthcare improvement is substantiated by their goals of closing the literacy gap by way of online education, improving socioeconomic standings (particularly for historically underprivileged groups like women) by way of agricultural advancements, and the advent of mobile banking in under developed countries.

While the end goal remains (at least) 15 years away, the possibility of such enormous steps forward is truly invigorating. But it cannot happen without one more key ingredient — you. As the Gates wrote, "informed, passionate individuals working together to form effective movements for change" is of paramount importance in realizing any meaningful change, and all it takes is "a few minutes once in a while to learn about the lives of people who are worse off than you are," and more importantly, a willingness "to act on your compassion, whether it’s raising awareness, volunteering your time, or giving a little money."

So capitalize on our collective privilege. It'll literally change the world.