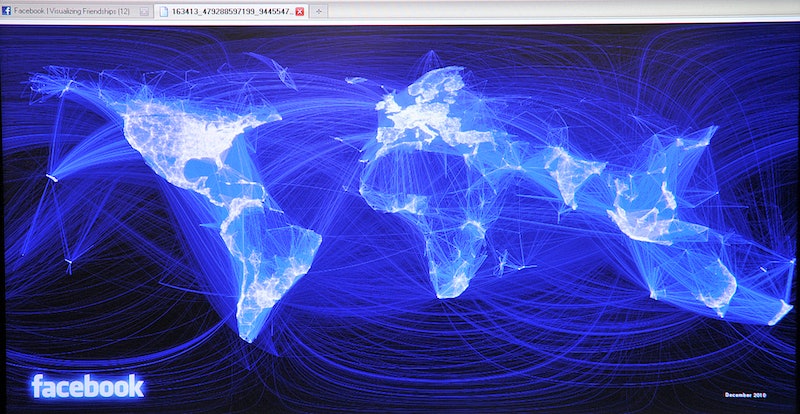 Call it the statement heard round the tech world — when Google Chairman and tech giant Eric Schmidt announced that "the Internet would disappear" at the World Economic Forum in Davos, he sent a few jaws to the floor. After all, this was a man who made his fortune at the helm of one of the largest Internet companies in the history of, well, the Internet. So could the backbone of his very existence simply evaporate into irrelevance, much like the ill-fated Google Glass? Of course not, friends — apparently, to "disappear" in Schmidt's tech-speak refers more to the idea of becoming commonplace, not ceasing to exist. And as history would tell it, his prediction is correct.

Schmidt made his provocative prediction when asked to remark upon the future of the Internet, during which he said, "I will answer very simply that the Internet will disappear." But Schmidt, it seems, has a flair for the dramatic, because after making his incendiary statement, he gave an explanation that assuaged the fears of what must have been everyone in the audience. The Internet would not go away, he explained. Rather, it would become so integrated into humanity's day to day life that it would become almost forgettable — taken for granted, much like running water and electricity in countries like the United States.

[The Internet] will be part of your presence all the time. Imagine you walk into a room, and the room is dynamic. And with your permission and all of that, you are interacting with the things going on in the room.

The ubiquity of the Internet and its technologies is one that has already permeated much of everyday American life. After all, it is difficult to imagine a day without your trusty smartphone (iPhone or Android, doesn't really matter here), much less your cell phone. Whereas Internet connectivity was once relegated to the economic and technological elite of the United States, it has now become a much more widespread commodity; the same cannot be said worldwide, where 4.4 billion people, or around 60 percent of the global population, remain unable to access the Internet. Here in America, while 50 million individuals do not use the Internet, the vast majority stay offline because they don't know how to use the Internet or think it is irrelevant — only 7 percent of those without access are actually incapable of acquiring Internet connection.

So given the widespread adoption of this relatively new technology in the country, it comes as little wonder that the Internet, according to Schmidt, will soon be taken for granted, even forgotten as an amenity. It'll just become part of our psyche. He explained, "There will be so many IP addresses ... so many devices, sensors, things that you are wearing, things that you are interacting with that you won't even sense it." The Internet will become so deeply embedded in our collective conscious that we will no longer understand life without it. So don't worry, Schmidt wasn't sounding his own death knell, he was only making himself (and his company) more indispensable to the American way of life.

This has certainly been observed with other breakthrough innovations, which were, at the time, perceived to be luxurious commodities, and not everyday realities. As Tim Worstall of Forbes notes, the classic example of this sort of full integration can be seen in the automobile, which has come a long way since its introduction more than a century ago. Worstall writes,

Early cars were a great deal more unreliable than the horses and carriages they replaced. So much so that a driver was not in fact, for the first few decades, really someone who directed the vehicle but a manner of carrying around your own mechanic with you to deal with the inevitable breakdowns. There were then decades ... when Sunday afternoons had to be spent doing this or that to a car in order to make sure that it was still good for the week’s work. These days most of us can still just about change a flat tire but who really knows how to do much more than that? Cars simply “work” these days. It might have taken the best part of a century to get here but it did.

And for the Internet, which was only invented some 25 years ago, it won't take a century for things to simply "work." It already does. And it's already becoming more and more integral to our livelihoods.

While this speaks volumes to the rapidity of technological advancements and the wonders of modern science and research, this speed should also be taken with a grain of salt. While the Internet may "disappear" for Americans, it has yet to appear for many in Africa, India, China and a host of other areas worldwide who are in desperate need of access to the web. While we may use the Internet to tweet and watch our favorite cat videos, for others, particularly women in under-developed nations, the Internet is a pivotal tool for education and economic self-improvement.

In late 2014, Internet inventor Tim Berners-Lee called the Internet a basic human right. If this is the case, then it is not enough to predict or accept the so-called disappearance of the technology in the United States. Rather, there should be a concerted effort to bring the Internet global (which companies like Google, Facebook and several others are, indeed, attempting to do). But Schmidt's overarching blanket statement (made to an audience of the financial, technological and political elite of the world at Davos, remember), fails, in some ways, to capture the importance of bringing information global. Regardless of how often we use the Internet, we should not take it for granted, certainly not while more than half the world has yet to have it.

So until the Internet appears in every corner of the Earth, it should not be disappearing from America.