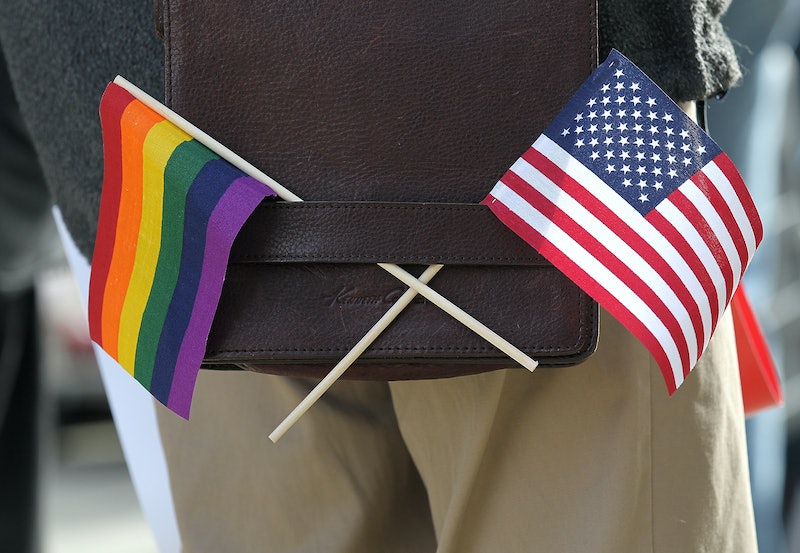 Although it sometimes seems as though there is no escaping news of some sort about potential presidential nominees from the GOP, the issues they talk about at this point are important to focus on, as they set the tone for the kind of campaign they expect to run. Are they too conservative? Too moderate? What do they think of contraceptive coverage, or for that matter, abortion rights? Though most of the stances they take on social issues predictably fall along party lines, one of the most pressing questions of the race will be: What do Republican presidential hopefuls think of same-sex marriage?

Same-sex marriage has made tremendous progress in the past year — 36 states have legalized it, though it's banned in 14 more, mostly states in the South and the Midwest. This spring, the Supreme Court will hand down a ruling that determines whether states will be allowed to impose their own bans on same-sex marriage, keeping the nation hyper-aware of the issue's development. It has reignited debate within the GOP as its members struggle to balance appeasing their conservative base with a national electorate that, more and more, supports same-sex marriage, as they run against a Democratic candidate that will most likely be on the side of the nation's growing consensus.

Here's what five of the GOP presidential frontrunners have said about same-sex marriage.

In 1994, during his first and ultimately unsuccessful bid for governor of Florida, Bush wrote an op-ed in The Miami Herald detailing his opposition to policy granting homosexuals legal protection from discrimination:

[T[o put it another way, should sodomy be elevated to the same constitutional status as race and religion? My answer is No. We have enough special categories, enough victims, without creating even more.

Harsh. But Bush's views on the matter seem to have evolved. His own state recently legalized gay marriage, and in light of the Supreme Court's soon-to-come decision, Bush released a statement that struck a more conciliatory tone:

We live in a democracy, and regardless of our disagreements, we have to respect the rule of law. I hope that we can also show respect for the good people on all sides of the gay and lesbian marriage issue — including couples making lifetime commitments to each other who are seeking greater legal protections and those of us who believe marriage is a sacrament and want to safeguard religious liberty.

Ah, Romney. Never one you would call "stubborn" on issues — his reputation as a flip-flopper hurt his 2012 presidential bid — the former Massachusetts governor has surprisingly remained steadfast in his opposition to gay marriage. Early in 2014, Romney reiterated his support for heterosexual-only marriages in an interview on NBC's Meet The Press:

I think marriage is a relationship between a man and a woman. And I think the ideal setting for raising a child is in the setting where there's a father and a mother...

I think it's going to take a long, long time to determine whether having gay marriage will make it less likely for kids to be raised in settings where there is a mom and a dad.

The Florida senator has staunchly opposed same-sex marriage throughout his career, and earlier this month criticized court rulings that led to its legalization in his state. He did backtrack slightly, though, perhaps looking to level with Bush — the other presidential frontrunner vying for support and donors in their home state — on the matter.

Rubio told CNN that the Supreme Court's decision would have to be respected, even if he personally disagreed with it:

I wouldn't agree with their ruling, but that would be the law of the land that we would have to follow until it's somehow reversed — either by a future Supreme Court, or a U.S. constitutional amendment, which I don't think is realistic or foreseeable.

The libertarian lawmaker, who has advocated for a smaller government role in many issues, holds opinions on issues such as military intervention, surveillance, and, lo and behold, same-sex marriage, that have increased his appeal among younger voters.

Late last year, when asked whether he could rethink same-sex marriage, the Kentucky senator shrugged noncommittally, and told CNN that politicians shouldn't get involved in the issue.

The New Jersey governor vetoed a bill in 2012 legalizing gay marriage in his state, but after attempting to appeal a 2014 Supreme Court decision that ruled that the ban unconstitutional, he dropped it. Christie continues to oppose same-sex marriage, and told the GOP not to give up on the fight. Late last year, he said that each state should be able to decide on it individually:

[E]ach state should their opportunity to be able to make that decision through their process. I do not believe that this is something that should be imposed from the United States Supreme Court down to the states.

Either way, it seems like most Republican hopefuls will face a tough time winning over undecideds on this issue — especially if this recent poll showing whether Americans would vote for Republican candidates who oppose same-sex marriage is anything to judge by.