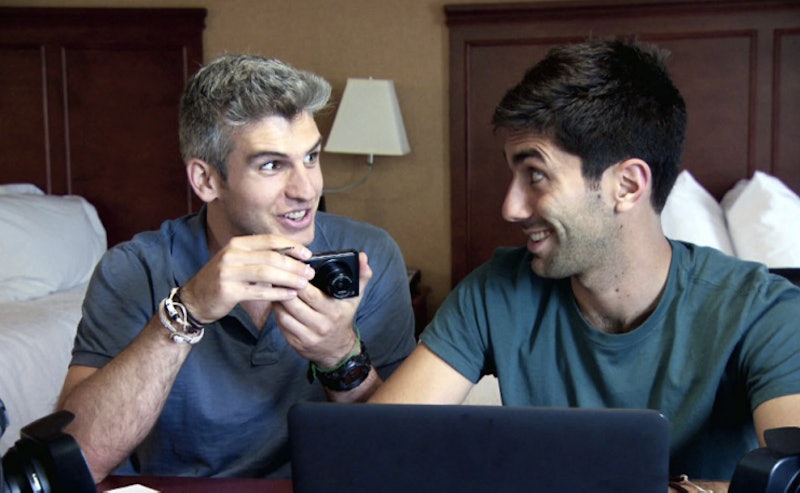 You know how sometimes, you just love your favorite TV characters so much that you want their stories to continue even after the show has concluded airing for the week? Sure, you can browse tumblr gifs all you want, and even pick up a comic book if the series has one of those multimedia tie-ins, but sometimes you just want more. That's where fan fiction often comes into play, which is literally what it sounds like: fiction, written by fans, about their favorite characters. But what happens if the fictional stories are actually about real people, not just make-believe characters? If you've ever wondered about Catfish Nev and Max fan fiction — which come on, I know you have at some point — I'm here to tell you that it exists. The one thing you should probably know about fan fiction — if you aren't familiar with it yourself — is that it's usually to satisfy the pairings of our 'shipper dreams. More than likely, you've accidentally come across some Harry Potter and Draco Malfoy fan fiction on the Internet, because it is EVERYWHERE. The writers behind these stories are diehard Harry and Draco 'shippers. So, it makes sense that the writers behind the Catfish fan fiction in question are diehard Nev and Max 'shippers.

Even though both of them are currently in long-term relationships (with Max's relationship being a little something called marriage) and are completely 100 percent real people, not simply characters MTV has created for our viewing pleasure.

But in case you were expecting anything else, let me be the one to tell you that most Catfish fan fiction is all about the forbidden romance between Nev and Max. I have a feeling that if they were ever to read their fan fiction out there on the Internet, they'd love it, just like how they love each other in real life, because their bromance is alive and real. Catfish fan fiction has taken that a step further, and actually given us a backstory, as well as lots of late-night hotel room rendezvous.

Also, it's usually written in the POV of either Nev or Max. I'm simply trying to prepare you in case you find yourself googling, "Catfish fan fiction" too.

On what might be the best known fan fiction website, FanFiction.net, there's a collection of stores about the two of them, and what happens after a long day of Catfish work. One story is described as, "Max is upset about a couple they tried to put together on Catfish and Nev tries to comfort him." There's also a Catfish-Faking It crossover, for MTV synergy. And, if you need your Frozen fix, there's an Anna and Elsa Catfish story (OK, so this one is about how Anna asked Nev and Max to help her find/meet Elsa, not that I read it). You can also find Catfish fanfiction other places like, Archive of Our Own, and WattPad — the story on WattPad is 24 chapters long.

So if you're a gung-ho Catfish fan, who simply can't wait for the new season to start and secretly dream of Nev and Max running away together, there are a lot of ways for you to get your fix until the show returns.