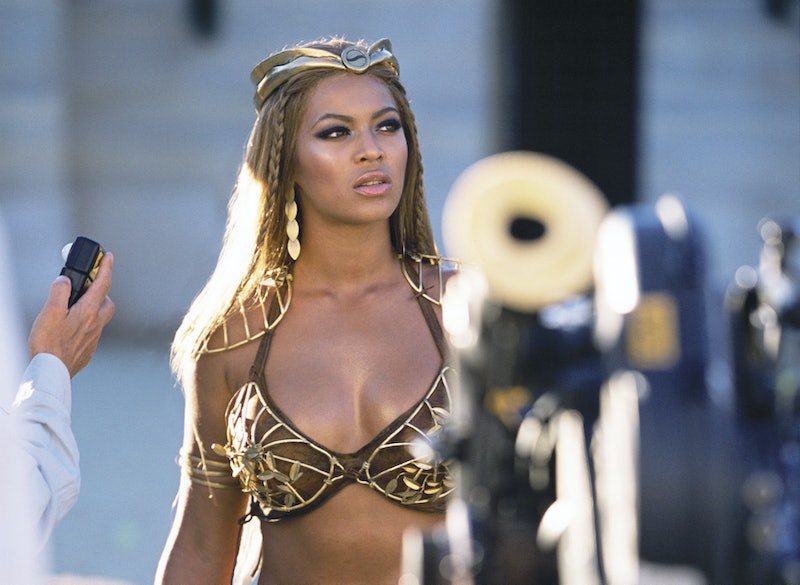 When you sit down to watch the Super Bowl on Sunday and catch all those glorious commercials, I want you to remember one thing: There is not and never will be one that tops Beyonce's Pepsi Super Bowl commercial from 2004. I don't care how cute that lost puppy is with the Budweiser Clydesdales, and I don't even care if John Stamos, Bob Saget, and Dave Coulier stage another Full House reunion. Beyonce, Britney Spears, and Pink dressed as gladiators singing "We Will Rock You" is the best thing that ever happened to the Super Bowl, and if you think any differently, you are purely mistaken.

If you've totally forgotten this commercial existed, though, I don't blame you. A lot has happened in the past 11 years; Blue Ivy was born, Spears shaved her head and let her hair grow back, and Pink married Carey Hart and gave birth to the ridiculously adorable Willow Sage. All three women have released ridiculous amounts of good music, and together, they've probably made enough money to buy the United States and name it after themselves. So if all of these events pushed their gladiator outfits back in your mind, that's OK. That's where I come in.

Before we begin our walk down memory lane, though, you might want to watch the commercial again as a refresher. Warning: I have been raised in Georgia and have been a Coke girl all my life, but damn did this three minutes and seven seconds of beautiful marketing make me want a Pepsi.

There are a lot of reasons to be totally obsessed with this commercial, and these are just a few.

They looked badass as hell.

They took a song popularized by men and turned it into a girl power anthem.

You hear that, Queen? The top three pop princesses of 2004 are totally capable of rocking the mess out of your song. And now I feel all pumped up, like I want to do something huge like write a bill that eradicates animal testing or trash a hotel room.

As in Enrique Iglesias. Of course, he's kind of just a side note, Julius Cesar-ing it up over there in the stands.

Everything was super historically accurate... you know, except for the Pepsi.

And speaking of Iglesias... I had no idea that he and the rest of the Romans had already developed aluminum cans filled with caffeinated beverages. You know there's nothing more refreshing than Pepsi after a long day fighting your fellow citizens to the death for sport.

More like this
Britney Spears Shares & Deletes Photos Of Justin Timberlake From 22 Years Ago
By Jake Viswanath
Harry Styles Is Performing At The 2023 Grammy Awards
By Jake Viswanath
Beyoncé & Blue Ivy Performed A "Brown Skin Girl" Duet At Her Private Dubai Concert
By Brad Witter
Cruz Beckham Teased New Music With An Adorable Nod To Mom Victoria Beckham
By Stephanie Topacio Long
Get Even More From Bustle — Sign Up For The Newsletter
From hair trends to relationship advice, our daily newsletter has everything you need to sound like a person who’s on TikTok, even if you aren’t.