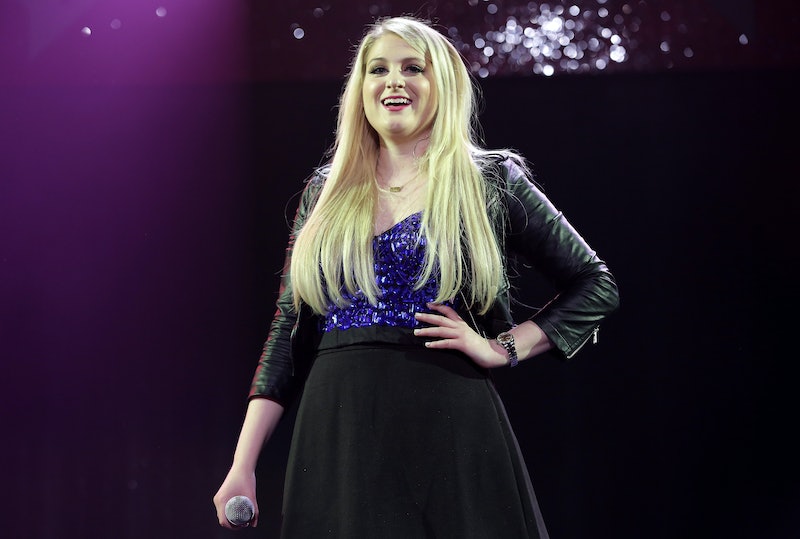 In her hit song "All About That Bass," Meghan Trainor proclaims, "I'm bringing booty back." And she did! The song sparked a body-positive movement that proves you don't have to be a size two to shake it like you're supposed to do. Yet while she may sing about her butt, that doesn't mean she's showing it off any time soon. In a recent interview with MailOnline, Meghan Trainor says she prefers to keep her booty a secret. She explains,

I was told that I started the booty song movement but no one knows what my booty looks like. That's the trick, it's all about the mystery. I save that for my boy. Well, for whoever gets to date me one day... I don't like pointing it out, I don't know why. I like to keep that a secret for my future hubby.

Props to Trainor for being so adamant about who can/can't see her butt. I'm not even being sarcastic — it really is an important statement! In a way, it's reminiscent of Taylor Swift's Belly Button-Gate, where she said she wants to keep her navel a mystery. I think it's awesome when celebrities intentionally choose to keep aspects of their lives private. Just because they're public figures doesn't mean every aspect of their lives should be up for public scrutiny — especially when it comes to their appearance.

While Trainor said she prefers not to show off her rear-end on stage, she doesn't have a problem with celebs who reveal more skin. She says,

Everyone gives Ariana Grande crap now for being too sexy but I think she’s classy with it and if you’ve got it then rock it... I know what I’ve got and I know which of my areas to rock, which I do, so I don’t wanna bend over in a bathing suit on stage.

True! Everyone should feel free to rock whatever parts of their body that they want. Even though a few months back Bette Midler dissed Ariana Grande's get-ups, it's nice that Trainor has her back. She can support other people's choice to dress more provocatively, even if she keeps herself covered up.

So there you have it, Trainor is still queen of the booty-positive movement, regardless of whether she shows hers off or not! Now excuse me, I'll be listening to this on repeat: