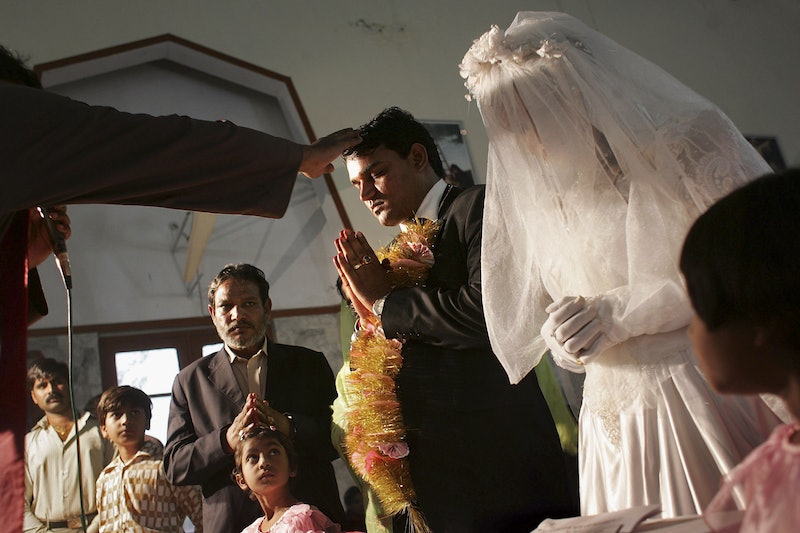 Pope Francis, officially the Catholic Church's coolest, most dynamic leader ever, has been outspoken on many issues — from his criticism of capitalism, to gender equality, to his public love for the Internet, the Pope has become a revolutionary of sorts for the church that many have perceive as archaic and inflexible. But perhaps a statement on the topic that most shook the foundations of Catholicism as a whole came on Friday, when Pope Francis urged a simpler annulment process, free-of-charge.

At the Roman Rota, the church’s final court of appeals for annulments, the Pope asked jurists to consider a faster, more streamlined annulment process that cost nothing:

I would like, therefore, to exhort you to a greater and passionate diligence in your ministry, offered in the service of the protection of the unity of the jurisprudence of the Church...

Divorce, long frowned upon by the church, has affected many of its believers as they face judgment and frustration over their formerly-wedded status in the church. But the Pope has, in recent months, initiated debate over the church's treatment of divorced Catholics as he aims to re-examine the church's attitude towards broken marriages without compromising its sanctity of marriages itself.

While many high-level church officials are pushing for the Vatican to soften its views on divorced Catholics so that they can resume their lives at church completely, without being discriminated against, many traditionalists have resisted changes in its attitude toward divorcees, arguing that marriage, as a holy union, cannot be compromised on.

Last fall, Francis convened a meeting on family issues in which top Catholic leaders also discussed divorce. Yet another conference is set to take place this October, after the Pope's U.S. trip.

Eagerly awaiting the outcome of the debate will be the many divorced Catholics across the world, who are routinely ostracized by their church for ending their marriages. Although the church does accept annulments, they are often expensive, costing hundreds of dollars and involving a long, drawn out process.

Helen Alvaré, a law professor at George Mason University and a former spokeswoman for the American bishops, told the New York Times that the church's approach to divorce and the indissolubility of a Catholic marriage raised existential questions to its worshipers:

"What is my place in the church, and do I feel welcomed?” [The sacredness of marriage is] key to the entire Roman Catholic cosmology — our understanding of the world, God, our relationship with him and our relationship to one another... [But] there’s a lot of divorced Catholics out there, and have we let these sheep wander without reaching out to them? Jesus wants us to look after all the sheep, no matter what.

As this October's meeting will see whether church leaders decide to recommend changes to the Vatican's view on divorce or not, it will ultimately be up to Pope Francis to determine whether to act or not.