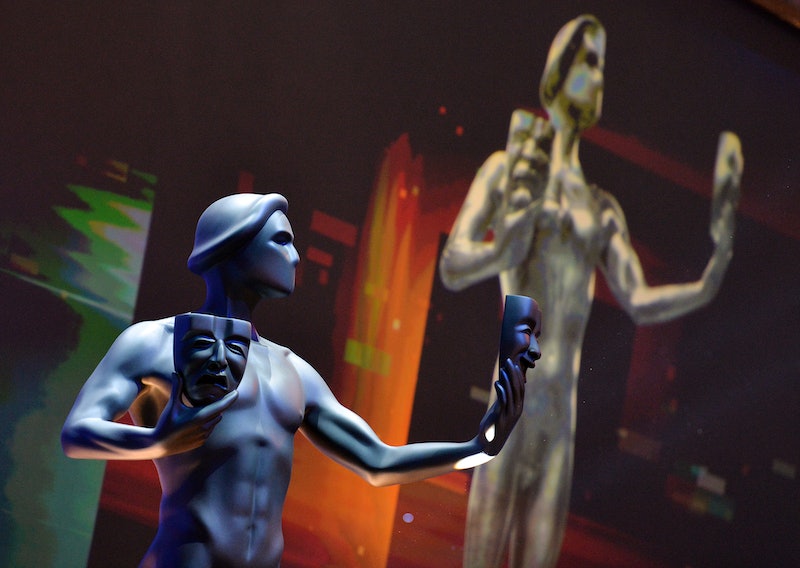 The 2015 SAG Awards just revealed a secret I'm sure they never wanted to share with the world. On Sunday night, when Reese Witherspoon was presenting the award for Best Male Supporting Actor in a Film, the SAG telecast randomly played an applause track — or at least that's what it seemed to be. Surprised, Witherspoon addressed the strange production error but moved past it quickly to award the actor statue to J.K. Simmons for his great work in Whiplash. But I can't get over it. Hell, no one should be able to get over it! Does this mean that the awards always fill out the sound for the telecast with fake laughter, clapping, and other reactions?

If you think about it, it kind of makes sense for the SAG Awards. The awards show only features actors as the guests for the event, along with their friends and family and maybe some agents thrown in as well. Maybe there just aren't enough people to really fill out the room. But nonetheless, hearing the applause at an awards telecast go on without, well, people actually clapping, is just as shocking and jarring as finding out for the first time that Santa Clause isn't real (sorry kids!).

Despite the understandable nature for the reason the SAG awards would do this, I'm still kind of outraged. Does this mean that the Golden Globes and the Oscars, and every other award show has fake applause and possible other reactions taped as well?

Clearly, I'm not the only person who was confused and angered by this blatant deception by the SAG telecast producers. But some people who are much better than myself decided to show humor about it.

And some people who are much smarter than myself called it from the start.

Others compared the awards telecast to popular sitcoms.

Then there were those who were just plain over the whole thing.

Not me, though. I shall be outraged until my dying breath. Thanks for ruining this for me, SAG awards.