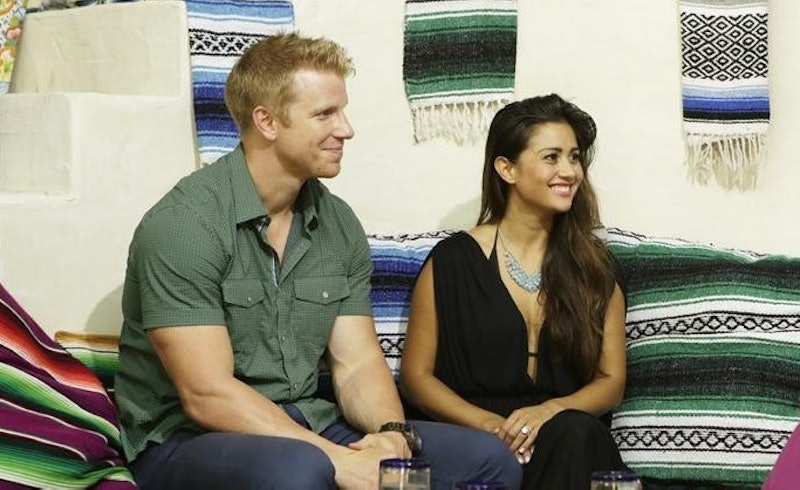 For the past 19 seasons, people have wondered, is The Bachelor scripted? Now I have your answer. No, the show isn't scripted, but it is somewhat choreographed. Former Bachelor Sean Lowe's new book For the Right Reasons details just how much Bachelor producers meddle in the affairs of the show, and it's not as bad as you might think.

But they do have their hands in a lot of things. Producers console contestants who want to leave, suggest topics of conversation during one-on-ones, and let people know which portion of the date is best for the heavy stuff they want to talk about. But for the most part, The Bachelor is natural. Sure, the producers set everything up to be idyllic and romantic, but what happens from there on is up to the people on the show.

It's kind of refreshing to know that this particular reality TV show isn't totally fake. There are certainly aspects of it that are less true than others. Like Chris Soules and Whitney "crashing" a wedding. I know in my heart of hearts that there's no way that wasn't staged, but the bond the two formed during the date couldn't be planned for. The scenarios might have a little help from The Bachelor producers, but the love (or lack there of) is very much real.

But because Lowe is dedicated to giving fans a behind-the-scenes look at the show, he's talked about 13 times producers stuck their hands in for the progress of the show.

They Keep Contestants Separate From The Talent

The number one Bachelor rule is no interaction off-camera. A producer's main job is to make sure that The Bachelor or Bachelorette doesn't get any alone time with a contestant if it's not being filmed. They take that job very seriously, because it's crucial to showing the true, and complete journey on screen.

They Won't Stop the Limo Until You Talk

Not every contestant wants to pour their heart out to the cameras after they get sent home, but that's too bad for them. Lowe revealed that producers turned a 10-minute drive to the hotel after he was eliminated into a never-ending ordeal to get him talking. Eventually, he did pour out his feelings just to stop the driving around in circles.

They Act As a Sounding Board

Apparently during Lowe's stint on The Bachelorette, he had producers telling him that he and Emily Maynard had a connection. Whether that's something they said to all the contestants, I don't know, but it seems the producers are invested in trying to keep the contestants' spirits up when they don't get to see the object of their affection every day. They even talked him out of leaving early on when he was upset to see Maynard kissing another person.

They Try to Change Your Look

In an effort to keep contestants from all looking the same, or to make people look more camera-ready, they'll give styling suggestions. Producers told Lowe to grow out his hair in preparation for filming. "Maybe my All-American look was too boring for a prime-time television show," Lowe muses in his book. He didn't end up sticking to their suggestion, so apparently that's all the producers' comments are: suggestions, not law. Although I bet a lot of people are too afraid to tell them no and potentially lose their spot.

They Stage the Limo Exit Order

The order in which the names are called is determined behind the scenes. Lowe says the show likes to put the most obvious choices first so that drama builds towards the end of the ceremony with the rest of the women who are unsure of their status.

On night one when everyone is freaking out about whether they'll get time with the Bachelor or Bachelorette, they should really be voicing their worries to production, not each other. Lowe says on his first night he pestered a producer to get time with Emily Maynard until finally one of them "pointed at [him] and said, 'you're up.'" The squeaky wheel gets the grease in Bachelor-land.

They Keep the Conversation Going

Lowe revealed that if one-on-one chatter has too many pauses or silences, producers will chime in and say things like, "tell him about your family," to keep the conversation flowing and the awkwardness at a minimum.

After Lowe was eliminated, he couldn't fly home for another week in case his early arrival blew the ending of the show. So he hung around with his handler who tried to cheer him up in the wake of Lowe's heartbreak. He once even stuffed an entire thing of wasabi in his own mouth to make Lowe feel better. It worked.

Lowe speaks very highly of the production team who were there for the contestants every step of the way. As Lowe got further in the competition he was assigned his own handler whose job it was to address his every need. "I mean anything. If I said, 'Brenner I need a massage,' he would call the masseuse and have him show up that day," Lowe writes.

Remember when Courtney Robertson stole Ben Flajnik away for some skinny dipping? Or when Sean Lowe ran through the streets of a foreign city trying to find Emily Maynard? Those illicit acts are often staged by production themselves, as was the case with Lowe. "Let's figure out a way to get you alone with her," one producer told him. "She's about to come home, drop Wolf off. Let's make a move."

It makes sense that production would want some random encounters here and there to liven things up. I mean, they staged a wedding crashing scene this season. So next time the house gets mad at someone who got secret time, maybe they should yell at production instead of the contestant.

They Structure When You Can Say Things

When Lowe wanted to tell Maynard he loved her, he ran it by production who instructed him when to say it. "Please wait to tell Emily during the evening portion of the date when things are supposed to be more serious," one producer told Lowe on his season. It makes sense that they'd like to stick to a certain tone. When Juelia told Chris Soules last week about her husband's suicide, it felt really strange to just return to a pool party after that. It's all about atmosphere on this show, and topic timing is everything.

They Try to Get as Many Important Conversations as Possible

When the Bachelor/ette meets a contestant's family and vice versa it usually looks pretty relaxed on TV. But Lowe says the day is "orchestrated to squeeze in as many important conversations as possible." They want the mom to get her own time, the dad to get in a talk, and even the siblings to weigh in. And often those conversations need to be had one-on-one with both the Bachelor/ette and the contestant which means at least six important, deep conversations need to be had.

They Try to Guide The Bachelor/ette

When Lowe was the Bachelor, producers tried to make sure he always made the right decision. "You're going to do yourself a great disservice if you pick out your final four on the very first night," one producer told Lowe. "Stay open-minded." That's great advice in general, and especially for a man about to meet 26 unique women. Throughout the process, the producers were Lowe's friends and council as he underwent the difficult journey to love.

There's a reason he thanked them all in the acknowledgement section of his book. They may never be seen on screen, but the producers play a big role on the show. They don't script things, but they're always there to lend a helping hand or ear in the name of finding the Bachelor or Bachelorette their one true love.