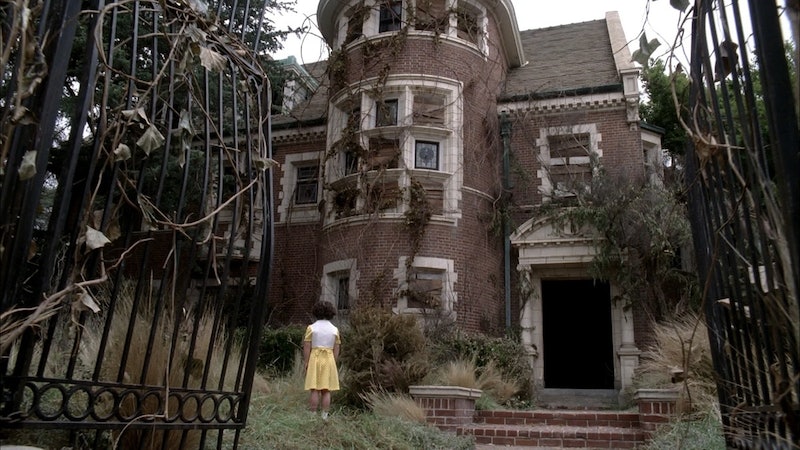 One of the main things that's differentiated American Horror Story from its fellow TV competitors (other than its uncanny ability to give you nightmares for weeks on end) is the fact that each season tells an entirely different story. It didn't matter if you never got around to watching Seasons 1 or 2 — you could jump right into Season 3 without feeling behind in the slightest. That is, until Ryan Murphy revealed that all AHS seasons are connected. Suddenly, first-time watchers started feeling out of the loop, while diehard fans found themselves rethinking everything they thought they knew about the Horror-verse, myself included. So, feeling inspired, I decided to start back at the very beginning and realized there are quite a few things you probably missed while watching the American Horror Story pilot for the first time.

Can you even remember back that far? We were so young. So innocent. Completely unaware of the ultimate trauma Murphy would eventually impart on our psyche. Sure, we only have a mere four seasons under our belt thus far, but for some reason, re-watching the pilot made me feel as old as Murder House itself. I mean, we've seen things, you guys. We're a lot wiser since we first walked across that Harmon family threshold, and with it brings a whole new perspective on the entire season. So without further ado, here are all the things you may have missed from the AHS pilot the first time around.

The Twin Pregnancy Was Totally Foreshadowed

I mean, the twins look as though they are literally coming out of Vivien right here. So not only did this just look super creepy, but it also hinted at a huge plot device that would become very prominent over the course of the season. That Ryan Murphy certainly is a sneaky one.

You've Definitely Been in Murder House Before

Any Buffy fans out there? If so, then you may have thought to yourself that Murder House looked awfully familiar. That's because it was featured as a frat house in the supernatural series' Halloween episode "Fear, Itself" during its fourth season (see above). Anyone else super bummed that we didn't see any Buffy-esque ghosts roaming the halls throughout the entire season? Seriously, not cool, you guys.

Ugh, I can't even. (R.I.P. Ma Petite forever.) But as some of you may recall, at the beginning of the pilot episode, the Freddy Krueger-like twins go around wrecking havoc on the house (youths!) and eventually make their way down to the basement where they discover a bunch of different body parts found in glass jars courtesy of the house's original owner, Dr. Montgomery. I'll spare you the images since most of them look as though they belong to a baby, but you get the idea. It was pretty gruesome and almost make Stanley's vicious antics on Freak Show look docile. Almost.

Asylum Hints Were Already Being Dropped

Oh Tate, you have no idea.

Heck, they might even be wearing the same hat. Either way, though, I appreciate the style choice. Way to up the cool factor, you guys!

Tate's Whistle Reveals A Lot About His Backstory

The eerie tune was written by Bernard Hermann (Psycho) and can originally be found in the 1968 British film Twisted Nerve, which centers around a disturbed young man who is a killer, has an obsessive mother as well as a sibling with Down’s syndrome, and becomes fixated on a teenage girl who wants to save him. Sound familiar? That's basically Tate summed up in a nutshell. If we had recognized the whistle before (which also made an appearance in Kill Bill) then we may have put it together sooner that Tate was Constance's son.

Jessica Lange Was Everything

Don't get me wrong, the Harmons are cool and all, but re-watching the pilot made one thought clearer than ever: Constance Langdon stole the show.

Since I knew that Rubber Man sex scene was coming, I made sure to pay extra close attention to Ben and (SPOILER) Tate's similarities/differences to see if there was any way Vivien would've been able to tell them apart. And it turns out there was one very distinguishing factor: their eye color. While Evan Peters has dark brown eyes, Dylan McDermott has bright blue. And since she was looking right into Tate's eyes while they were doing ya know, I found it all the more surprising that Vivien didn't immediately pick up on the difference. I mean, she definitely knows her husband's eye color at this point in their marriage, right? Which makes me wonder if Vivien could possibly be color blind. Just some food for thought.

Where the Heck Was Sarah Paulson?!

I knew she had a much smaller part in Murder House, but now that I've gotten so used to seeing her as a prominent cast member, the series felt incomplete without her there.