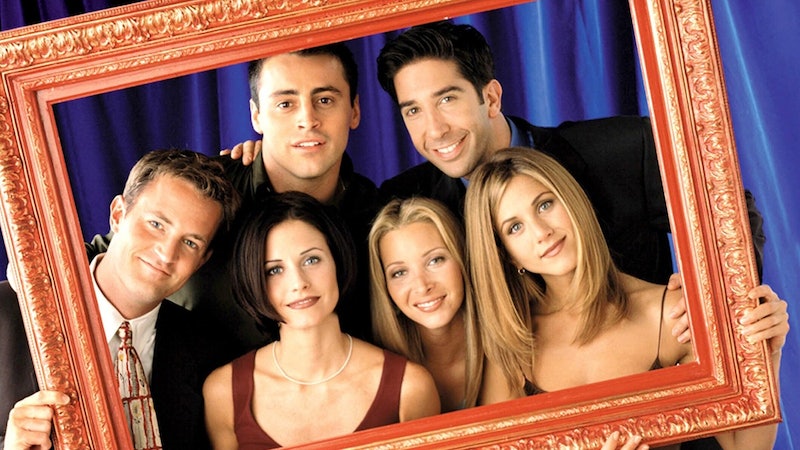 Are you, too, in the K-hole that is an infinite Netflix Friends marathon? If you say no, you're lying. I myself am on Season 7, which both sickens me to my core and also gives me a strange sense of pride, since the series only became available for streaming on January 1. During the re-watches, many mysteries abound, and I'm noticing stuff I was too young to appreciate when the series originally debuted in 1994, like, how do they all have so much free time? How come Rachel just whirls into Monica's life and Monica puts a roof over her head? WHY IS ROSS SO WEIRD AND YET ALWAYS GETTING MARRIED? But perhaps the most frustrating, persistent, and mysterious question: how the hell did Phoebe meet the rest of the Friends? And why... do I care so much? I'm only gonna answer the former question because the latter would force me into self-reflection, so no thanks.

Phoebe and Joey are obviously the outsiders of the group, which is maybe why they have such a special connection. We know that the Gellers are related and Chandler and Rachel were old friends of Ross and Monica, respectively. FINE. It's explained in "The One With the Flashback" that Joey met Chandler through a roommate ad, and somehow they did not have a horribly miserable experience and became BFF. But why couldn't they have dedicated, like, two minutes of that episode to explaining where the hell Phoebe came from? A deep, detailed read of Phoebe Buffay's Wikipedia page says that Phoebe met Monica through a roommate wanted ad, but that just isn't enough for me.

Much is known and yet still unknown about Phoebe's past: she lived on the streets when she 14, her mother killed herself, she stabbed a cop once, she can sometimes speak French. So why aren't we told how exactly she fell into the life of Monica Geller? I have some theories that are not at all plausible but still more satisfying then the scraps the series offered. One: Phoebe Buffay is an alien that materialized, and was sent to Earth to help all the Friends live out their destinies. Her extraterrestrial tendencies show through in her naivete, like when she still believes as an almost 30-year-old woman that Santa Claus exists.

Two: When she mugged Ross on the street and stole his comic book, Science Boy, she began an unhealthy obsession with Ross Geller and spent the rest of her adolescence trying to find him and become a part of his life. She succeeded, and then found out Ross was a total weirdo but at that point was already living with Monica and couldn't get out of her lease.

And four: Maybe Phoebe really did just meet Monica through a roommate ad. But what happened in between her living in that burnt-out Buick to becoming a masseuse that can somehow afford to live in that beautiful apartment? Who even IS Phoebe Buffay, and can she be trusted? And how do I stop watching Friends?!