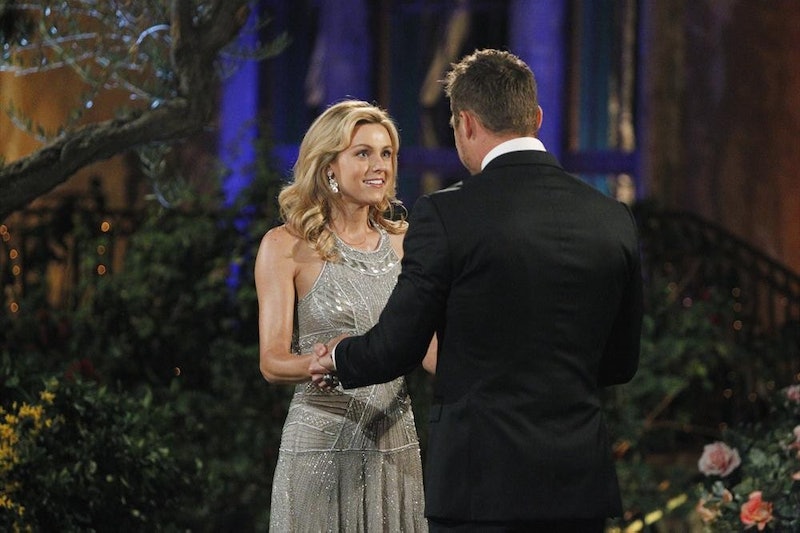 We've spent an embarrassing amount of time wondering about what's going on with Ashley S., Bachelor fans. And it's frustrating, because one of the reason I wrestle with being an avid watcher of Chris Harrison's longest running gig is because The Bachelor constantly promotes the crazy woman stereotype; whether Ashley S. was faking it or not, she helped promote that stereotype too. In fact, if she was faking it, she's mocking "crazy women" on The Bachelor which is so not cool. Thankfully, Ashley S. is now eliminated.

Of course, you could say that I'm being defensive of the women on this show. There have been some major antics going on in just four episodes — the drinking alone has been out of control. But does any of this, even Kelsey complaining ad nauseum about camping, count as crazy? Hell no. These women are put in a fish tank, showered with alcohol, and expected to behave like dainty, little ladies. When they fail, they get talked about behind their backs, black bars across their booties, and the blooper reel soundtrack. With Ashley S. being thrown into the mix, it was all a bit much. I don't hate the girl — I think it's going a bit far to get that up in arms about a person hanging out on a reality show for five minutes — but I am glad her "crazy girl" act is gone.

Earlier this month, Bustle's Martha Sorren did a little digging into Ashley S. and found proof she's faking it:

So, farewell, Ashley. You were nothing short of entertaining, but this show already does enough to make women look awful. We don't need you to help it along with your act.

More like this
Why Did Lace's Fake Her Birthday On 'Bachelor In Paradise'?
By Kadin Burnett
Here's The Full List Of Zach's Confirmed & Potential 'Bachelor' Contestants
By Kadin Burnett and Grace Wehniainen
Here’s What Went Down Between Romeo, Jill, & Kira Before 'Bachelor In Paradise'
By Grace Wehniainen
Where Is Former Bachelor Host Chris Harrison Now & What Is His Net Worth?
By Hugh McIntyre
Get Even More From Bustle — Sign Up For The Newsletter