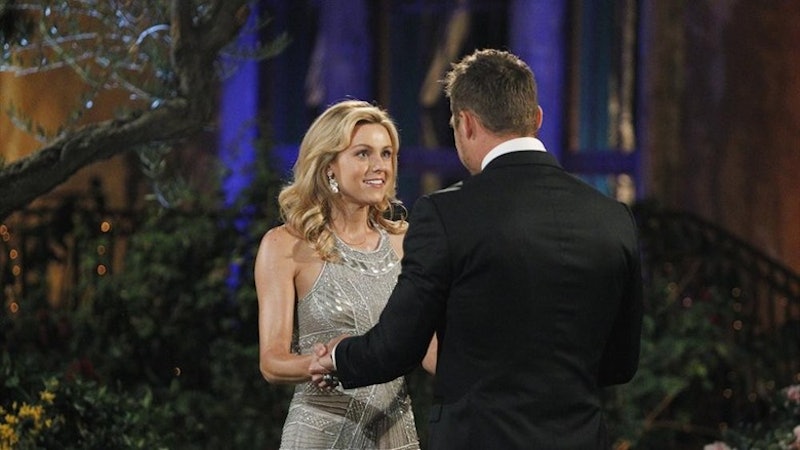 I hate to break it to you, but Ashley S. from The Bachelor is probably not crazy. As funny as her ramblings about onions and pomegranates might be, I don't think the "crazy Bachelor girl" image ABC is painting is the full story. When we first met Ashley, she seemed pretty normal. She told Chris Soules she believed in lucky pennies and whenever she found one she would put it in her shoe for luck. Not totally crazy, right? But then the next time we saw her she was almost incoherently rambling about onion layers and yellow roses in a strange voice. She was drinking water all night, and she wasn't even drunk. So what happened?

I have two theories. Either she is pretending to be crazy (at ABC's request or her own desire for attention), or she's being edited to seem crazy. Editing is everything. Since reading former contestant Courtney Robertson's book, I have a new outlook on the show. In it she says that most of the mean comments she made were just her trying to be funny and get done with the interviews. She said the producers responded to her comments and made her think she was being funny and would let her go faster if she delivered a one-liner. Although I believe the falling in love part of this show is real, there's a lot about it which is constructed and the perception of the girls is one of those things.

The editors have the power to tell whatever story they want and can cut context or encourage antics that can make someone appear more insane than they actually are. But I think Ashley S. is actually pretty normal in real life and I can prove it.

She Has an Acting Profile

Sure, she may be listed as a hair stylist, but this New Yorker is into acting too. She has an Explore Talent profile and everything. Perhaps she's taking her personality over the edge for some exposure?

Although her Twitter is blocked and her Facebook is basically inactive, I can tell from her Instagram that Ashley has a pretty normal Internet presence. She posts pictures with her friends and family, snapshots of herself snowboarding, and photos of latte art. She's pretty basic online, but nothing about her Instagram spells crazy. She even poked fun of her pomegranate moment with a picture of one on premiere night. If she was insane she wouldn't find the humor in the moment, would she?

Speaking of finding humor, during the scene where she picks the pomegranate in the premiere she says, "I feel powerful" and then breaks off into a normal sounding laugh. To me it felt like she was just kidding around. (Catch it at the very end of the video.) ABC cut the laugh in the promo for the scene, furthering my belief that they're editing her to look crazier than she is. Maybe on the long first night (that lasted well into the morning), she was bored and tired and just goofing off and ABC presented it like the moment was real.

In his most recent Bachelor blog for People magazine, Chris Soules tried to clear some things up about Ashley S. He started with the notion that she was unfit to handle her paintball gun. "Even though some of the girls were freaked out by Ashley S. handling her gun, I thought Ashley S. was just having a good time with it all," he wrote. "I definitely wasn't scared of her, that's for sure." Then Chris addressed the "crazy" ramblings she had about the Mesa Verde and life and souls (emphasis mine).

Ashley S. is definitely different. She's also beautiful. And sweet. And not that crazy. Did she say some things that were a little off-the-wall? Sure. She also said some things that made a lot of sense. It's not easy dating the same guy as your housemates and then having a bunch of cameras televise it. The experience was hard for her, and she expressed that to me. I really respected that, and because of that I was all for giving her a few extra chances.

So whether she's pretending, or the process was hard on her, or it's just the way things were edited, I stand behind my conclusion: Ashley S. isn't actually insane and we should stop labeling her as such.