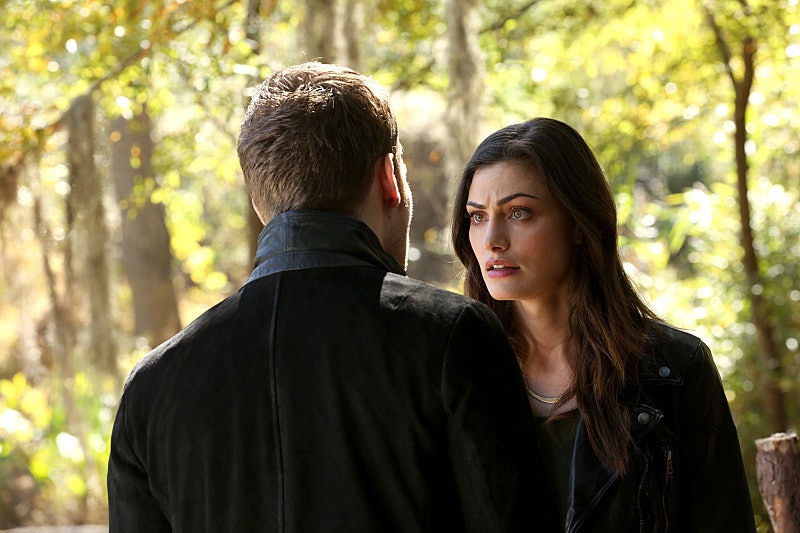 Is Hayley ever going to start seeing the red flags that are dangling in her place? Apparently, even though Jackson was willing to let her go during last Monday's episode of The Originals, Hayley's decided to throw herself to the wolves — literally. During "Brotherhood of the Damned," The Originals' Hayley and Jackson decided to go through the werewolf marriage pre-ceremony rituals and they're creepy. I mean, having the bride and groom do drugs so they can reveal their deepest, darkest secrets and be pure enough for marriage? That's a little much — even by werewolf standards — so what does that say about the Crescent wolves?

My first instinct says that Jackson's grandmother is in cahoots with someone. Sure, the ritual has been around for a long time, but it's entirely possible that the wolves have had an interesting, secret relationship with another supernatural group or being. I know you know what I'm thinking — Dahlia. Last Monday, The Originals revealed that Freya Mikaelson's spirit is out there somewhere, which definitely means that Dahlia is out there too. And, possibly, she's in the deepest recesses of the Bayou, hanging out with Jackson's grandmother.

Here's the issue with this ritual — aside from it being moderately creepy to force two people to smoke a peace pipe filled with an intense, yet natural, truth serum. Yes, honesty is very important in a marriage, but it really doesn't seem like the wolves are doing this for the benefit of the couple. And, I mean, this is The Originals, people — none of these supernatural groups do anything without thinking of the bigger picture.

So, what does that say about the wolves Hayley is hellbent on uniting? Well, first of all, they're not nearly as vulnerable and victimized as they make themselves out to be and second, they might very well be after her baby as well. I'm well aware that this is supposed to be an "ancient ritual," but it just seems too tailored to the situation where Hope's life hangs in the balance of an elaborate death ruse. Hayley revealing her secret to Jackson and possibly his grandmother puts everyone and everything she's worked for at risk and it's hard to believe that her secret is safe with the wolves. Again, it's truly creepy that their ancient practice is drugging the soon-to-be-married couple and forcing them to share their own secrets as well as those of their families.