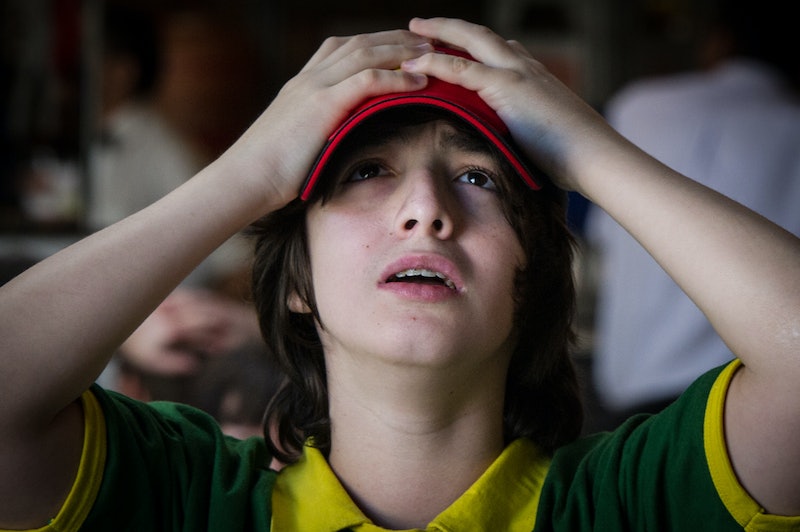 If you're not convinced that sex ed in America needs a major overhaul, then just consider these stats: In 2012, over 300,000 babies were born to girl between 15 and 19 years of age. Every 107 seconds, an American is sexually assaulted. One in five women will be raped in her lifetime (only 16 percent of those rapes will be reported to the police).

These are issues that need to be discussed frankly and openly, and that's where recent Yale graduate and sex educator Colin Adamo comes in. Adamo wants to be that positive change needed in sex ed with his project Hooking Up and Staying Hooked (HUSH).

HUSH is out to change how teenagers, teen boys specifically, handle sex and relationships. Having seen how sex education was handled when he was in high school, Adamo realized that there was a need for him to help make that difference. With his Kickstarter campaign, Adamo hopes to get enough funds to create a full graphic novel of Hooking Up and Staying Hooked, which will be available online for free. The graphic novel will be both informative and engaging so that teenage boys will hopefully choose Adamo’s positive take on sex and relationships, as opposed to the negative, and sometimes dangerous resources that are often found online.

Bustle talked to Adamo about what he hopes young men will gain from such an honest and responsible approach to sex and relationships. Here are the six main things he'd like to see change about sex ed for teenage boys.

1. We Need To Give Them The Specifics

"When I reached puberty, I realized that everyone seemed to be making a big deal out of this whole dating, relationships, and sex thing. The problem was that no one seemed to provide anything tangible or useful in terms of advice on what to do about it. 'Just be yourself' and 'Always use a condom' aren't clear instructions on how to move forward.

What was I supposed to do with information like this? Go up to a girl in my dirty gym clothes and say, 'Hi, I'm great at Mario Party on N64 and I'm already wearing a condom. Want to go out with me?'"

2. There Needs To Be More Literature About Sex And Relationships For Teens

"In search of some useful direction, I started frequenting the Sex & Relationships section of the local bookstore with my best friend Sara in high school, but it seemed like nothing was written for people my age. Everything talked about meeting women in clubs, or how to decorate your bachelor pad. [At the time,] I drove the family's beat up minivan and had about $27 in a tin piggy bank. There was a blaring gap between my reality and the recommendations in the literature."

3. We Need To Get Rid Of Mixed Messages

"The biggest obstacle is mixed messages. When you're just trying to figure who you are, how to attract a partner, and how to function in a romantic or sexual relationship; everyone has a different message for you as a young man.

Movies and TV will tell you to always be persistent, while an older sister might tell you to always be respectful. Music will tell you to seek as many partners as possible, while a classroom lesson might tell you abstinence is the only justifiable choice. An encouraging dad might warn you never to knock anyone up, while your community might value paternity. A mother might insist you always be a gentleman, while your friends throw around the belief that girls only like bad boys. Every source of guidance is pulling you in a different direction or asking you to meet different sets of expectations."

4. We Need To Talk About The Fact That Men Are Not Entitled To Women's Bodies

5. We Need To Remember That Plenty Of Teenage Boys Are Sweet

"What keeps me inspired when working on this project is knowing that more often than not, guys are expressing they just want to do a good job. They want to take someone on a nice date, they want to be an awesome boyfriend, they want to make a girl feel good, or they want to know how to grow into a man they're proud to be. I see my job as directing these impulses to help cultivate a generation of great guys."

"The trick in wrangling dudes away from the misogynistic, demeaning, and dangerous guides that exist is to offer success without the rest. When most other people write sex ed info for teenagers it's sterile, safe, boring, and superficial. [But] if you're working in public health you can't really talk about 'getting girls.'

[HUSH] speaks to the insecurity, bewilderment, or ignorance someone might feel when they seek information on dating or finding sexual partners, but it does so with serious messages of being responsible and genuine. HUSH merges the allure of a guide that will help a reader be a guy that girls desire with the mature messaging to always treat themselves and their partners with respect."

6. We Need To Redefine Success In A Way That Respects Women

I want Hooking Up & Staying Hooked to help young men feel secure in who they are as they grow into the men they want to be ― and the men that we as a culture need them to be. In a world that pressures them to be "successful" with women, I want this guide to help them define "success" for themselves in a manner that is responsible and respectful to women.

The habits guys form at this age might stick with them for the rest of their lives. If we can capture their attention with the advice they're desperate for at this stage in life while instilling within them attitudes of being communicative and compassionate, we have the chance of creating a generational shift in masculinity and romantic relationships."

You can donate to Adamo's Kickstarter campaign here.