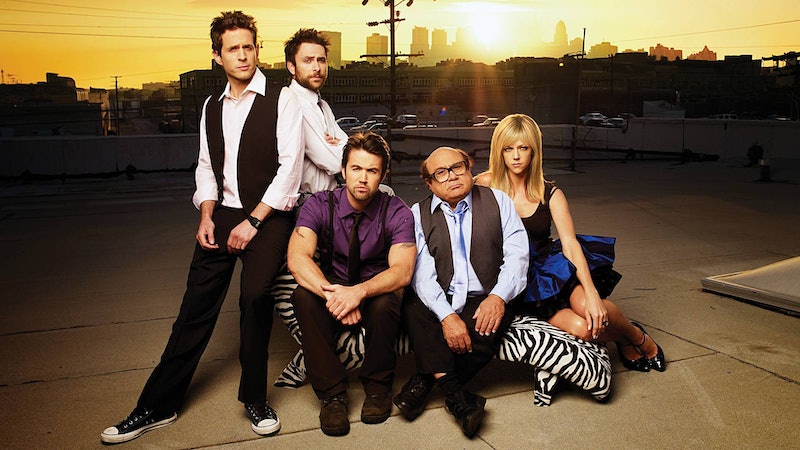 It’s Always Sunny in Philadelphia is an interesting animal. It’s the sort of show where you feel you can hop in on any one episode — be you all caught up, returning to the series after an unexplained hiatus, or trying it out for the first time — without concern for the established canon. The nature of the program as a vehicle to tackle an endless array of sociopolitical constructs, current events topics, or pop culture tropes allows each entry to come across as a self-sufficient little story, and one structurally similar to its many brethren.

But Sunny has changed quite a bit since its early days. A closer look at that which started out as a simple week-to-week cultural satire reveals a constantly evolving and self-deconstructing intricate universe built over the years by creators and stars Rob McElhenney, Glenn Howerton, and Charlie Day. The change is so drastic, in fact, that a glance back at the pilot might render the characters and their bizarre world altogether unfamiliar.

Ten years on the air can do that to a show — nurse it from a simple seedling into something entirely new. With so many elements in today’s seasons of It’s Always Sunny that we’ve grown used to, what does a rewatch of that very first episode reveal as a little strange in retrospect?

The series title card displays before the episode title card

Starting with the second episode of Season 2 ("The Gang Goes Jihad"), every episode of It's Always Sunny has cut into a plot-establishing cold open with a punchline title — one that answers a character's rhetorical question, exposits the situation we just saw begin to unfold, or otherwise lays the groundwork for whatever trouble the gang is about to get itself into.

The pilot, like the seven entries to follow, precedes its episode title with a card for the series' name It's Always Sunny in Philadelphia... sensible, since the show in these early days didn't quite have the notability that it does today, and wouldn't want to estrange or confuse new viewers.

Sweet Dee is, in fact, sweet

Present day Deandra Reynolds is marked by the same vile, selfish, manipulative behaviors that compose her male counterparts... she's just not as good with Machiavellian ploys, primarily because of her weighty insecurities. But a pilot-era Dee actually shows off some compassion. Twice she tells her friends and brother that she loves them, only to be rebuffed by disinterest on each occasion.

Mac is dumber than Charlie

Charlie Day's eponymous character has become a fan favorite for Sunny viewers, largely due to his apex of emotional instability and intellectual vacancy. But in the pilot, Mac was the clueless numbskull. Sure, he's not exactly shown to be the genius of the bunch today, but he's leagues more on-the-ball than Charlie.

Not only that, but Charlie is socially competent

Not only is contemporary Charlie dumb, he's also riddled with psychological maladies and anxieties that make everyday interactions a nightmare for him. But in the pilot, Charlie shines when introduced to a group of Temple University students, making friends (and winning a few wandering eyes) instantly without much effort.

The comedy is softer, slower, and more intimate

Whereas today's It's Always Sunny episodes are marked by erratic scenes filled with excess shouting and wacky plot turns, the pilot feels almost Mumblecorey in its ambiance. Long takes of civil conversation fill the episode, which is particularly strange when such scenes consist only of Charlie and Mac (the two loudest and most erratic buffoons on the show).

Mac and Dee team up!

Of all the in-group enmities that exist on today's Sunny, that between Dee and Mac is by far the most volatile (which is doubly funny considering the fact that actors McElhenney and Kaitlin Olson are married in real life). But the final act of the pilot sees Mac and Dee teaming up to undermine Charlie and Dennis' business plans for Paddy's Pub.

A minor detail, but an odd one nonetheless.

It's a little regressive, even for a liberally-minded show

The characters of It's Always Sunny in Philadelphia are about as admirable and open-minded as a young, booze-filled Archie Bunker, but the creators use this ignorance to purvey some pretty progressive messages. While latter day episodes often hit the nail on the head when aiming to undercut their characters' backwards ideals, the pilot doesn't quite come far enough.

The pilot sets out to shine a light on the "casual" racism and homophobia of its main characters, approaching the subject with benign intention. But that doesn't stop the episode from cashing in on one or two jokes wherein homosexual acts serve as the punchline... primarily at a straight character's expense, but nevertheless. Thankfully, It's Always Sunny has matured quite a bit over the past 10 years, shying away from the utilization of cheap gags like that in favor of the criminalization of the mentality behind them.

The characters eat a meal during the day, at an outdoor restaurant, like human beings

It's just plain weird to see them doing anything that seems healthy or normal.

And stranger still: they get drunk

Almost every single episode of It's Always Sunny is marked by excess drinking on the part of Dennis, Dee, Mac, Charlie, and Season 2-and-on recruit Frank (played by Danny DeVito). But we almost never see the gang reach levels of intoxication. Why? As we learn in Season 9, Episode 7 ("The Gang Gets Quarantined"), the group has imbibed so much alcohol that they're practically immune to intoxication... and, what's worse, stricken with torrential withdrawal symptoms if even mere hours are to pass without a sip.

In the pilot, we see Dennis get black-out wasted after just a few shots of tequila. I guess 2006 is when things started to take a dark turn for these folks...