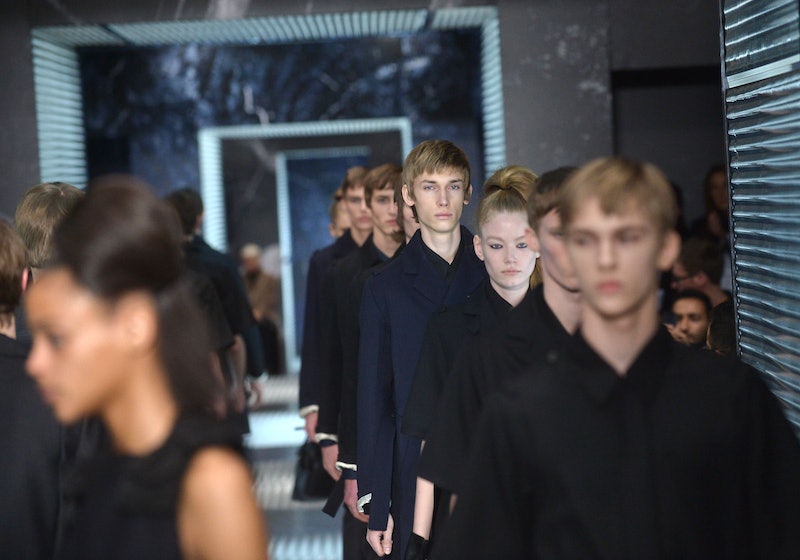 Issues of gender equality and fluidity are nothing new, but lately there have been positive strides in the media indicating a more widespread acceptance of blurring gender lines. Transgender and women's rights still have far to go in our society, but every time the media offers a positive portrayal of gender diversity it's a huge push in the right direction. From Laverne Cox being on the cover of Time and landing a role in a TV show playing a transgender attorney, to the Selfridges Agender Project (an experiment gender-neutral store), fashion and pop culture are finally paving the way to acceptance and tolerance.

The 2015 Fall Menswear and 2015 Spring Fashion shows have been no exception. This year's batch of shows has possibly showcased the most amount of gender-bending ever seen during fashion week. Women wearing menswear or menswear-inspired clothes on the runway is nothing new, but now we're finally starting to see hints of the opposite perhaps one day becoming the norm: men wearing women's clothes as well. Shows like Prada and Gucci have been taking androgyny and inclusion of genders to the next level, with everything from women walking men's shows to men wearing dresses, bows, and heels. And it's about time. Gender and gender-specific clothing is just one more societal construct for daring fashion designers to deconstruct and comment on. Below are six of the shows from 2015 so far that are leading the pack in embracing gender fluidity.

On the seats at the Prada Fall 2015 Menswear collection were a printed manifesto that read "Gender is a context and context is often gendered." Miuccia Prada explained that she has long wanted to combine men's and women's fashion in one collection, and that is exactly what she did with this show. Both male and female models walked the runway wearing minimalist, dark, and sleek pieces. Although they shared the same aesthetic, the genders were still more divided than blurred; women wore skirts and low-cut dresses while the men wore pants. Still, just the fact that a designer is confronting their own assumptions about gender through a collection (and thus forcing us to do the same) is something.

Gucci's Fall/Winter 2015 Menswear collection reversed the usual trend of menswear in women's fashion by including feminine touches, both in the clothes and the styling. Some of the male models had long, straight hair and they all had that wan, high-cheekboned androgynous look (including the handful of female models who also walked in the show). Several of the slinky tops sported pussy bows of various sizes, from delicate ribbons to massive floppy bows. Other traditionally feminine styles such as a Peter Pan collar and red lace were also sent down the runway.

The women weren't the only ones wearing makeup in Givenchy's Fall 2015 show. Several of the men sported full-face makeup by British makeup artist Pat McGrath that resembled African masks. Although the male models' intricate makeup might be described as more terrifying than beautifying, they did share the same delicate hairstyle of gelled forehead curls with the female models.

Both Hailey Baldwin and Jourdan Dunn were among the female models who made an appearance in the Moschino Fall 2015 Menswear show. They were scantily-clad, but no more so than the chest-baring male models. It's hard to say what purpose women's swimwear has in a menswear collection, but I'm not complaining about more designers blurring gender lines in their shows.

So many 2015 menswear shows had women walking in them that we started holding our breath to see if the reverse would happen. Would men walk in the womenswear shows? So far, the answer seems to be... Sort of? Chanel's Spring 2015 show used male models as accessories, having them accompany the female models while carrying bouquets of flowers and even a Chanel watering can.

Hood by Air had a very gender-fluid Fall 2015 Menswear show. Both men and women walked in it but it was very difficult to tell the two genders apart thanks to obscured faces and clothes that could be worn by both sexes. In fact, some of the male models even wore chunky heels and at least one male model wore a dress.