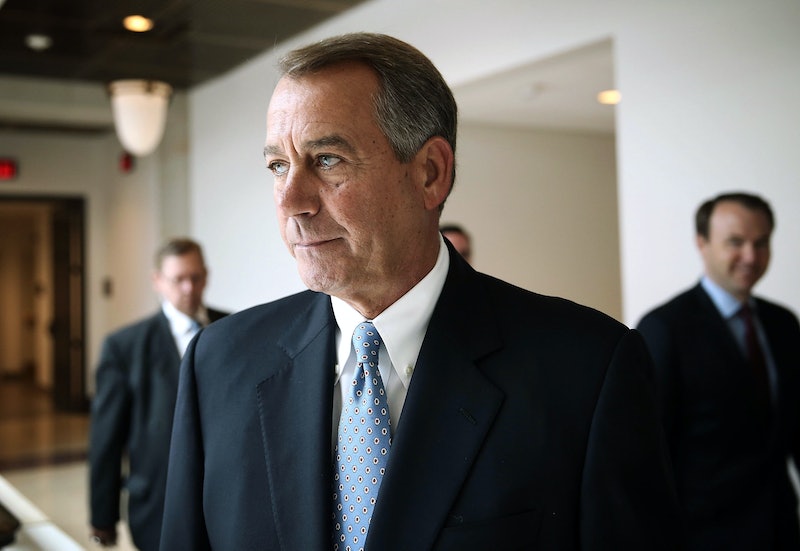 Bad news for those hoping House Speaker John Boehner (R-OH) would work toward the passage of the bipartisan Gang of Eight immigration overhaul: it's not happening. Boehner will not convene a coalition excluding his party's most conservative members, a move that would potentially allow the immigration bill to pass.

In a closed-door meeting Tuesday, Boehner privately assured conservatives that he would not violate the Hastert rule when it comes to immigration reform. The Hastert rule is the governing principle used by Republican House Speakers since the mid-1990s that allows only bills with the majority of the majority's support to advance. Boehner says he has only violated the principle when there is "zero leverage" or a bad alternative. “Immigration is not one of these scenarios," he said. "We have plenty of leverage."

Boehner added, "One of our principles is border security. I have no intention of putting a bill on the floor that the people in this room do not believe secures our borders. It’s not gonna happen.”

Good thing the Gang of Eight plan that Obama has backed calls for the toughest border security America has ever seen. Your opposition is totally legitimate, Mr. Speaker. Moves like this certainly couldn't be why Congress has a record-low six percent approval rating right now.

More like this
Joe Lycett Just Took HIs David Beckham Qatar Protest To A Whole New Level
By Sophie McEvoy
Iran Has Issued A Death Sentence Over Mahsa Amini Protests
By Catharina Cheung, Darshita Goyal and Maxine Harrison
Footballer Jake Daniels Shared His Thoughts On A World Cup Boycott
By Sam Ramsden
Matt Hancock's “Cringe” Jungle Karaoke Left Twitter Reeling
By Sam Ramsden
Get Even More From Bustle — Sign Up For The Newsletter