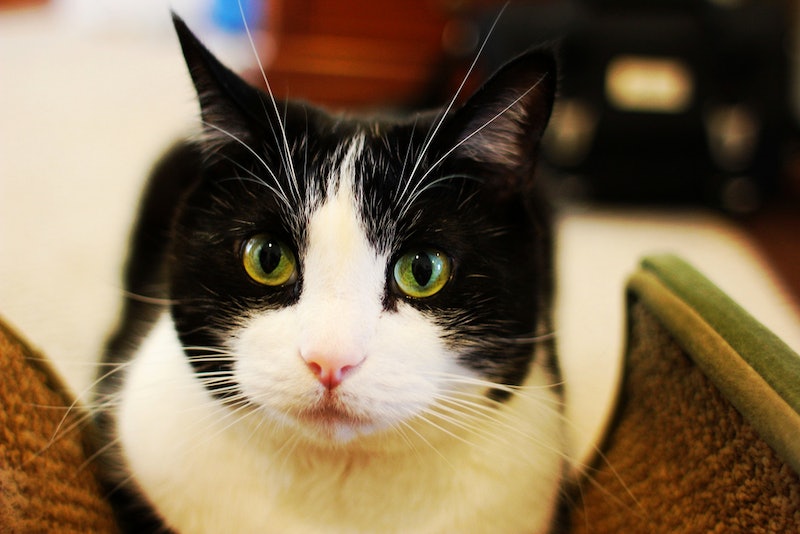 The jury may still be out on whether asking someone 36 questions can really make you fall in love with them, but that's not stopping people from conducting as many homegrown experiments as they can to test the theory. The latest is arguably the most interesting, mostly because of its participants: A guy asked his cat those 36 questions, and the resulting video? The word "priceless" doesn't even begin to describe it. Seriously, you guys. It's one of the funniest things I've ever seen.

YouTuber and Redditor Ohkamp posted the video on the Cats subreddit yesterday. Weirdly enough, it doesn't seem to have gained much traction over there (and honestly I can't understand why — it's kind of the best); it did, however catch the eye of the Daily Dot, which is where I spotted it this morning. Wrote Ohkamp in the video's description, "Since my wife is out of town, I took this NY Times article and asked the 36 questions to another member of the household"... with that member being his cat, Charlie. Obviously the experiment didn't result in anyone falling in love with anyone else (except maybe the Internet falling in love with Charlie) — the cat can't answer back in actual words, and odds are most cats wouldn't care what your answers would be, either — but, as the Daily Dot's Greg Seals noted, "It's all probably for the best, given that four minutes of unbroken eye contact with a cat would likely leave you with a bleeding heart and a few bleeding scratches the match."

Charlie does appear to be a pretty talkative cat, though; the best bits of the video involve some well-timed meows, even if he can't speak English. Below, I've attempted to translate a few of Charlie's responses into human words; scroll down to watch the whole video.

1. Before making a telephone call, do you ever rehearse what you are going to say?

"No, but I know that you do. I do not approve of your tomfoolery."

2. When did you last sing to yourself?

"Yesterday. I have a glorious voice. Here, let me sing you the song of my people."

4. How do you feel about your relationship with your mother?

"...We're not on speaking terms. I do not wish to discuss this topic any further. You have displeased me, human."

5. What do you value most in a friendship?

"Whether or not the 'friend' can provide me with food and/or cuddles on command. Sigh. You'll do, I suppose."

6. Complete this sentence: "I wish I had someone with whom I could share..."

"My magnificence. I am SPECTACULAR."

7. Take four minutes and tell your partner your life story in as much detail as possible.