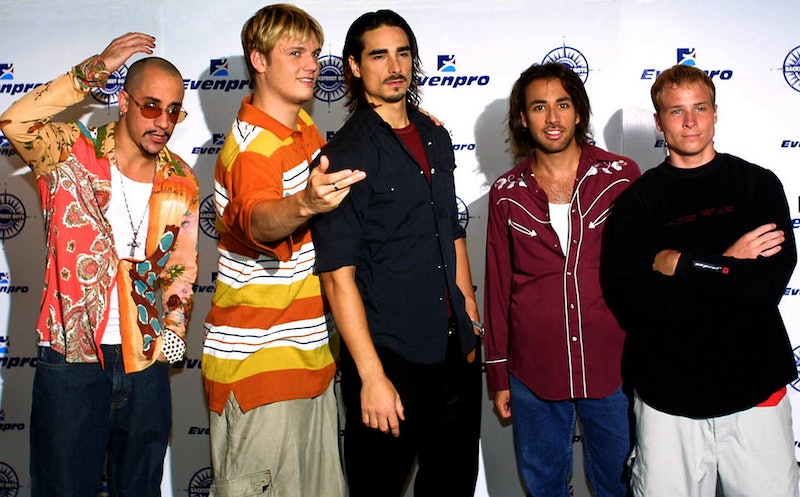 Anyone who ever took the time to plaster their walls with wafer thin Tiger Beat posters in the late '90s and early 2000s knows the importance of declaring a side. You were either a Backstreet Boys fan or an *NSYNC fan, and if you liked both (like myself), it made things easier to at least pick a side to lean to. The *NSYNC & Backstreet Boys rivalry was all too real for us, but when I had the chance to speak to Nick Carter, I had to ask, was it real for the bands too?

"There was a rivalry that was sort of created because of our managers and record labels," he says. "You know, we were prideful people that we believe that who we are and what we are and you know… I think that when Jive had signed them and when our managers sort of took them on we felt like it was a lack of appreciation for who we were at the time and what we offered them as well."

In the Backstreet Boys documentary — Backstreet Boys: Show 'Em What You're Made Of , out Friday in theaters, on iTunes, and Video on Demand here— the history of the band's progression and subsequent explosion is traced, included the point at which original manager Lou Pearlman built a rival five-man boy band, *NSYNC. This development is painted as a rather dark time in BSB's history, the point at which — as the voiceover says — the band felt betrayed by their unique set-up being recreated with five new guys.

And while Carter confirmed that the rivalry was real, he says it's more like a sports rivalry than anything sinister or salacious. "When you’re that young and there is a lot of testosterone ... there’s just a lot of things that are competitive," he says, adding that in the end, *NSYNC vs. BSB might have actually helped, though the group didn't know it at the time.

And clearly, people picked sides... and stuck with them:

But Carter seems to have found the silver lining in a rivalry — though he and the rest of the band had trouble with it initially, per their documentary. "And it was just natural. It was real," he says. "In the past you had Rolling Stones, you had the Beatles, you had all sorts of different bands that sort of pushed one another. There’s nemeses — [in] football there’s Seattle Seahawks and [The 49ers] ... and at the end of the day, it pushes people to be better and there’s nothing wrong with that."

Of course, things haven't always been smooth after the fact, evidenced by some shots fired by former *NSYNC-er Joey Fatone back in April:

Luckily, that mini-rivalry fire burned out pretty quickly, because by May, Carter and Fatone were palling around on Instagram:

So while we continue the unanswerable BSB vs. *NSYNC debate into eternity, we can all rest assured that our silly bickering and comparing of themed lip-glosses, over-priced marionettes, and concert posters made both of our beloved boy bands better, if not occasionally silly. And that certainly works for me.