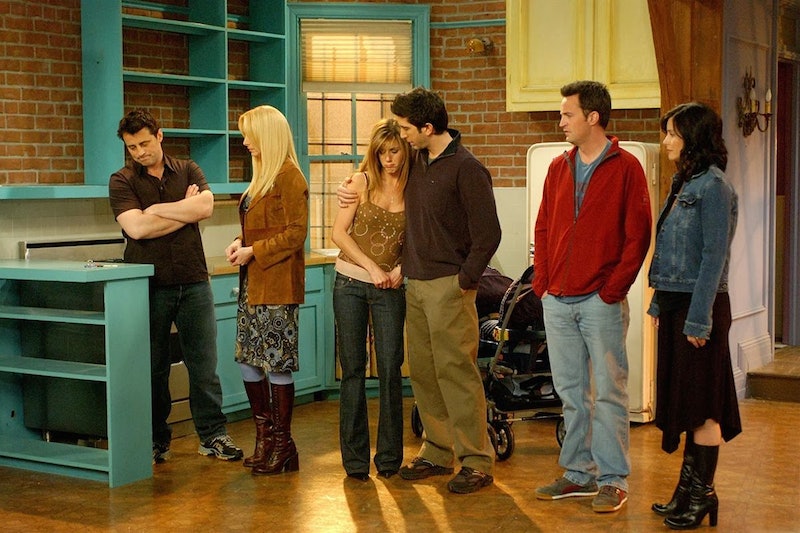 It’s not unusual for a sitcom — especially one with as long a lifespan as Friends had — to both find and lose its qualitative footing midway through its run. Such was the case for NBC’s colossal hit, which may never have misplaced its audience, but sure as heck misplaced its comic voice. Friends defenders are in large supply, but even those most adamant can’t muster a convincing argument to qualify the show’s ninth and tenth seasons with its first handful. (Or maybe they can, and I’ve just been refusing to listen. Either way, I’m sticking to my guns.)

The primary problem is what the series did with its characters. While the Manhattan sextet started out as a group of quirky but grounded and empathetic lonely strugglers, they transformed over time into a collection of bug-eyed, perpetually shouting cartoon caricatures, wholly emancipated from the humanity that once made them so inherently watchable. By the time of the finale, every one of the Friends had been rendered a shell of his or her former self.

Granted, the severity of these devolutions varied from Friend to Friend, eventuating in a few instances of only partial bastardization of the show’s original character concoction… but that’s really only in comparison to the truly unholy other half of the group, anyhow.

So how much of an atrocity was the series’ handling of your favorite Friend? Let’s take a look.

Although our first sight of Rachel comes as she bolts into a New York City café draped in a lavish wedding dress and a heavy panic, she quickly becomes the most levelheaded member of the central group. She’s still got her quirks — a sustained childlike wonder from a lifetime free of genuine responsibility, most dominantly — but serves overall as our relatively sane vehicle into the frightening world of adulthood, occupied by the eccentric and slowly fragmenting (but still believable!) other five.

As Rachel was the most even-keeled character from the start, she had the slightest distance to fall over the course of the ten years to come. Jennifer Aniston’s penchant for comic nuance kept Rachel a relatively down-to-Earth figure until the end. When you think about it, hopping off a plane and giving up on a once-in-a-lifetime job to seize your true love isn’t much nuttier than ditching your fiancé at the altar.

From moment one, Chandler was enveloped in his own quirky sensibilities. He was a habitual joker, compulsively cleaving a distance between himself and the world around him to the point where he felt almost like an external commenter on the show rather than a participant within it.

But what good is any of that — the psychological density and artistic merit inherent in a character confined to such a meta schematic — when you can have legions of ass jokes and the routine shrill whimper instead? And so, from Friends’ most clever character sprouted perhaps its most infantile.

Phoebe’s is easily the most distinct persona offered by the pilot; where Monica, Ross, Chandler, and Rachel are your factory brand of New York neurotics, and Joey is the same alpha male dud we’ve seen time and time over, Phoebe is something highly specific. Call her a hippie, a flower child, a spiritualist, or (as the pilot script deems her) a “New Age waif,” but no matter the designation, you’ve got something wholly separate from the rest of the pack.

In some ways, Phoebe wound up more “normal” at the end of the series than she was at the start… but that doesn’t make her arc a victory. While most of her counterparts succumb to the whims of their singular dominant traits, Phoebe evens out to become alarmingly indistinguishable from her peers, save for the occasional crack about a heightened proclivity for sexual exploration. In other words, the show managed to make its most unique character its most boring.

…and he ended up really stupid. Alarmingly stupid. Unbelievably — and I’m using that word literally, here — stupid. A simple devastation, but a potent one nonetheless.

Monica’s desecration is especially tough for me to talk about, considering the character in her original form is my favorite (and considering my inexplicable love for Courteney Cox as a comic actress). While Rachel might have been the audience’s logical launch point at the pilot, Monica was the audience's emotional launch point. She was her world’s resilient punching bag — not to degrees of supreme comic tragedy (that’s Ross), but to a more relatable, more amenable level. She was sweet, kind, sad, confused, and unlucky. More than anything else, Monica was a victim of her own wayfaring psyche. What could be more empathetic than being your own worst enemy? And who that has struggled with such a plight wouldn’t want to see it reflected in someone as charming as Monica Geller?

Well, too bad, forlorn viewers! By the end of Friends, Monica was entirely unrecognizable. She wasn’t the compassionate, neurotic loser we all championed as the show’s unspoken hero, but a shrieking, bossy, manipulative, and altogether mean nuisance. It’s as though once Monica got her happy ending — the marriage proposal she had always longed for — the writers didn’t have any idea what to do with the character.

Aaand here we are. The most profoundly baffling tragedy to befall any of the Friends characters. When we meet Ross, he is admittedly a bit of a caricature: soft-spoken, stammering, buried within himself, painfully uncomfortable in his own skin. Even though Rachel is the newcomer to this chic little world, Monica is the hapless navigator thereof, Chandler is the outside observer, and Phoebe is the alien hiding within — leaving Ross as the one who most of all does not belong. It’s all rather evocative, even in its sillier moments, thanks to some affable character construction courtesy of the script and David Schwimmer’s brand of acting. Got all that?

Good. Now forget it. And instead, sub in a whole mess of yelling. Hysterical yelling. Panicked, hostile, borderline inside yelling. Once the producers realized somewhere down the line that Schwimmer could muster a funny scream, they made that their new mission statement. Forget all the emotional groundwork they had poured into Ross, their tragic hero. Instead, he’d become the guy who yells.

And that's about the size of it. Six great Americans all cut down in their prime by the greatest atrocity of them all: bad writing.