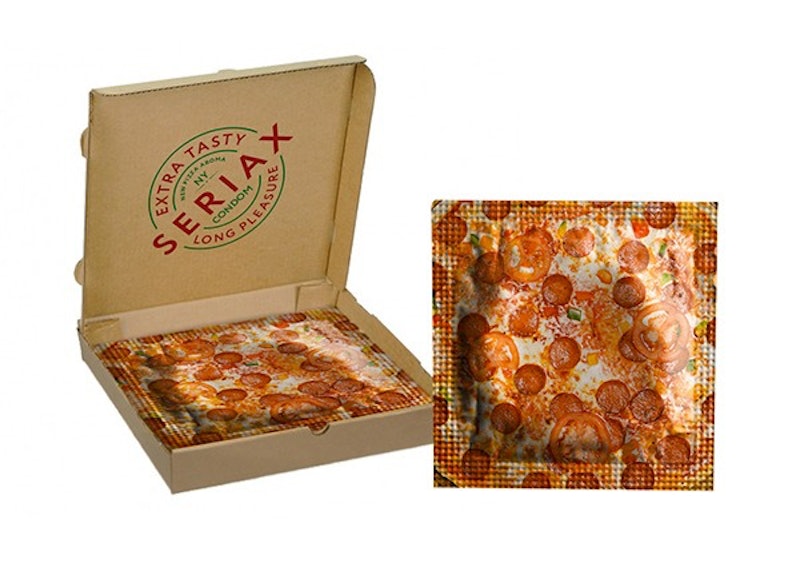 "How you doin'?" is what you'll be saying after you get yourself one of these sweet Friends-inspired condoms in a pizza box. That's right, the condom comes in a box (GEDDIT?!). The condom is designed by Moscow resident Marina Malgina, who explains of her beautiful creation:

"[sic] What is sex? Fun and pleasure! What else can give us these feelings? Of course, food! When I was creating this package, I was inspired by Joey character (F.R.I.E.N.D.S.) and his well-known problem: «- If you had to give up sex or food, which would you pick? - Okay… sex. No, food. No, uh… I want both!»"

Ahhh, the age old dilemma. Malgina believes she's found the answer: "Package tries to solve this problem, mixing sex and food." It's really quite indicative of what outsiders think of American culture, and maybe a bit embarrassing? Of all the takeaways you can derive from all the cultural output from America, "sex" and "food" are the two most outstanding, obviously. Malgina goes on to write:

"[sic] Pizza and sex are the important parts of American culture and especially tv-shows and movies. That's why this limited comdoms' package will be interesting for most of young people not only F.R.I.E.N.D.S. fans"

There you have it: America is sex and food. Those are our main preoccupations. And the Friends characters are our spokespeople. Eh. Not too shabby (for Rachel) if you ask me. Also, a tiny condom-sized pizza in a tiny condom shaped box is kind of fun too.