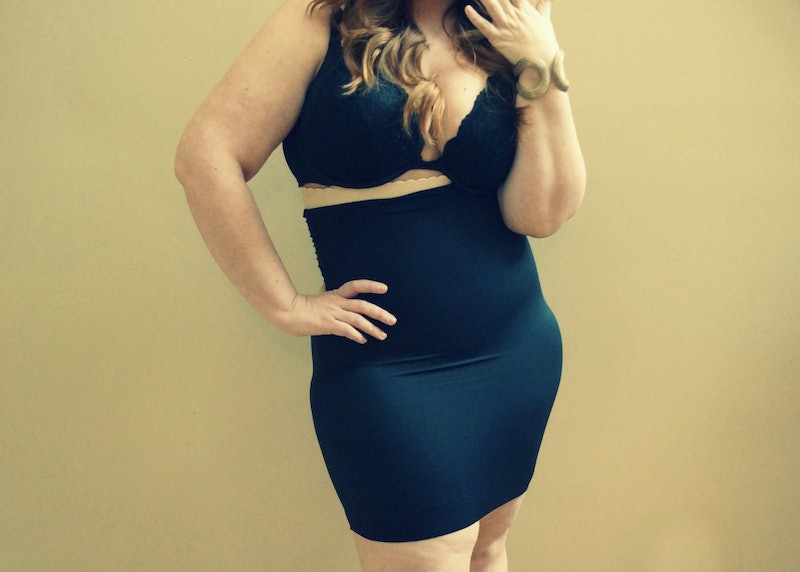 We spent last weekend at a wedding for one of Andy's college friends, and it was one of those situations where he was in the wedding, but I was not, and that's fine. Seriously. The less I need longline strapless bras in my life, the better. They always start off okay, but by hour three, they're basically cummerbunds.

But due to my dress, I did need some shapewear. I actually don't wear it that often in my day to day normal life. I'm not against it at all, and find shapewear to be a huge confidence piece, but it's been super hot outside, my natural body temperature runs hot, so that usually means yeast infection party. And, I've been wearing a lot of jeans, and shapewear makes them slide down constantly, also sometimes I like remembering my flesh isn't made of pantyhose.

Plus, neurosis alert, they make me claustrophobic and my tummy gets all, dude, if I don't stretch all the way out right this second, I'm going to fucking lose it. I'm swear to God, Brittany, get me out of this elastic coffin or I will fucking lose it.

I know some people feel weird about shapewear, like it's somehow cheating? I mean, I guess I can see their point, but seriously, it's an adult spandex body suit, not liposuction. It's going to smooth out your lumps and help with your posture, but I don't think you are really chloroforming people into some false belief about your naked body. I'm either gonna be smooth fat or visible panty line fat. Those are the choices.

But regardless, for the fancy dress I ended up wearing, because black tie weddings are still a thing and nobody is embracing the Duck Dynasty theme as much as the products in SkyMall Magazine would lead you to believe, they helped smooth things out a touch.

Before the wedding, the Spanx (and that Spanx is plural, as in I wore two pair. I wanted to clarify that, because the plural of Spanx is Spanx... like deer, so it can be confusing.) I wore looked essentially like this:

I did the kind that look like giant panties, and then layered over that, a giant tube version for dresses. I don't like the tummy/thigh combo Spanx. I don't know the technical term, so I refer to those as the "half wrestling singlet ones," because I have chunky thighs, and they dig in too deep, like the garter I couldn't wear on my wedding day.

That photo right there is the best Spanx will ever look on me. From that point on, it's like Shawshank Redemption and a slow painful escape to the floor.

Get low, Get low To the window , to the wallTo the sweat drop down my balls To all these bitches crawl

Holy shit, Lil Jon was rapping about Spanx the whole time. I should update Urban Dictionary about that...

Six hours later, I peeled the moist scuba suit from my body and collapsed on the floor. Filling my lungs to capacity for the first time since being seated on the groom's side. It burns. It burns so good.

It's like baptism by shapewear, and you emerge from the water born again and with this weird linea nigra from the tummy seam.

I curse them and stuff them back into my underwear drawer, however let's face it, our fight is only temporary. There will always be another shift dress.

But, is all this necessarily one-sided? Probably not. I often imagine inanimate objects have human feelings, which is why I apologize to my toilet during my period. My Spanx are no exception, as they stare up at me damp and rolled up from the drawer, not meeting me my gaze, biting their lip until they can't hold it in any longer. They say to me:

First of all, peeing through the hole is a privilege. Not a right.

I'm the whole reason you can twerk and not look like an idiot based on anything other than principle. But seriously *whispers* you should stop doing that. It feels like when people over 27 try and use the word "cray."

We both know you took the slice of cake with the giant frosting flower on purpose, but you acted aloof about it. Everyone in cake line hates you.

No good decisions happen in parking lots after you drink brown liquor. Again, the hole privilege. It's a thing.

Spanx is right. I did take that slice on purpose.