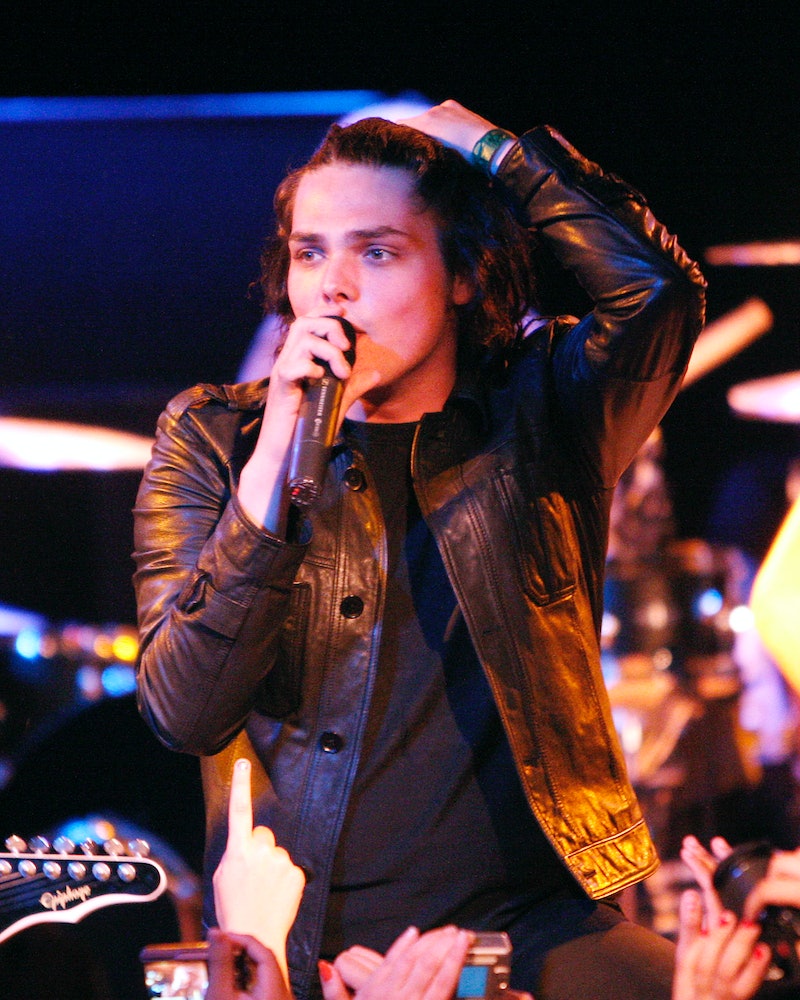 Everybody has that one celebrity crush who overtakes every aspect of their being from ages 12 to 16 (16 being the age when you [should] realize that there's a reason you never see adult emos), and mine (like most people's in the 2000s) was Gerard Way. The man, the icon, the legend who has only been pipped for the post of "favorite man to ever exist in my heart" by David Bowie. Not only did My Chemical Romance fuel every aspect of my emo personality and never-ending need for music that screamed at my angst along with me, but Gerard's specific style through each album and era was and is iconic. Just as we can (and love) to track Bowie's progression through artistic phases, the same can be done for my childhood hero.

My first encounter with Gerard Way was via my best friend's older sister's desktop wall paper. I remember it vividly: A press pit photo from a show — Gerard was all long hair, chubby face, pale skin and black clothing. Screaming and presenting his tiny teeth as sweat dripped down his makeup from the intensity of his singing. Emma (the friend's sister) was the coolest person I knew and was in love with the coolest celebrity I'd ever seen. I remember day dreamingly picturing them as a couple — because I was 10 years old when Three Cheers For Sweet Revenge was released and it was a few years before I even thought of writing Mary-Sue fan fiction about Mr. Way and me.

What struck me most, at the tender age of 10, was that I had never really encountered a sub-culture before. Finally, I was introduced to a world outside of the perfectly packaged pop that I was the target market for. I was always a weird kid (in the least embarrassing cliché way of saying that) and something about that picture of this beautiful, black haired, makeup-ed man stuck with me for the rest of my life.

Somewhere in the move from elementary school to high school, I completely forgot about My Chemical Romance — until a year later, anyway. When I started dating the only goth in my year, I had to learn hurriedly about the music that came with black lipstick and a dog collar. I started as all emo kids start — with Kerrang! music station. Obviously, as a proud member of the MTV generation, there is no way that "Helena" was the first music video that I ever saw, but it is the first that I properly remember. Although I Brought You My Bullets, You Brought Me Your Love was My Chemical Romance's first album (and an excellent album in its own right), I believe it was with the release of Three Cheers For Sweet Revenge in 2004 that the band's aesthetic influenced their popularity just as much as the music.

For most of Three Cheers For Sweet Revenge, Gerard's clothing choices fit the emo standard: Black suits and skinny ties. What was most captivating was the range in makeup which Gerard (and Frank Iero, whose eyeliner crosses over each eye became iconic in their own right) wore. The black line across the eyes now seems to me a tribute to the new romantic era of Adam and the Ants whilst copious amounts of red eyeshadow made Gerard's performances their own Tim Burton masterpieces. Although makeup on men in music was definitely not a new thing (shout out to my main man Bowie), it was new for me. It was revolutionary not just for a man to be wearing makeup, but for me to be attracted to a man who was subverting gender roles in such a rudimentary way.

During this period, as the "Ghost Of You" music video demanded of him, Gerard Way shocked me to my core as he cut his hair fairly short (for him, anyway). This soon grew out to a cute flicky bob (but I may be biased), yet my favorite part of this era of Way was not the hair — not even the bullet proof vests that all of the band members began wearing on stage — but the beginning of writing key words on his neck and arms. Occasionally they were offensive (such as the c-word) but more often than not, they were seemingly random (such as Fairy, Piggy, You Win). This word writing reminded me strongly of the most memorable Manic Street Preachers photo shoot: The culture slut one. At the time, I definitely didn't pick up on all these references that the band was nodding to, but looking back, it makes me love them even more.

The Black Parade was the album that cemented My Chemical Romance in my heart and gave the band a much bigger audience. Welcome to the Black Parade reached number one in the UK and I remember my poor emo heart burning with rage as people who bullied me played the song on their Sony Ericsson phones. This album meant the world to me, mainly because it meant that I got to watch "the band that saved my life" live for the first time. Of course, by this time I already had numerous My Chemical Romance t-shirts, as well as a lot of other useless merchandise, including an MCR pillow and most importantly, a Black Parade jacket. This uniform is probably the most recognizable of all the band's "looks" over time and an obvious shout out to those worn by The Beatles on the Sgt. Pepper's Lonely Hearts Club album cover.

Gerard's hair then changed completely and rocked my world in a new way. The cropped, platinum blonde that Gerard sported was (apparently) an effort at making him look more "ill" for the role of The Patient in the life changing "Welcome to the Black Parade" music video. If you didn't know (why wouldn't you know), "The Black Parade" had a complete storyline to it, that followed The Patient coming to terms with his coming death. But for me, Gerard's haircut brought with it a whole new inversion of my personal standards of style. As previously I judged and abhorred anyone with short hair, dreaming constantly of finding a guy with straight ebony hair to sweep me off my feet — now I was opened up to a new... openness. The mainstream wasn't evil. The counterculture wasn't everything.

In the time between albums, a lot can change. For the band, many members married, even having children and becoming (as I refer to all parents as) "real adults." For me, I went from the ages of 12 to 16, seemingly trying to hit as many stereotypes as possible in the in between: Goth to emo to scene kid to hipster to Tumblr user. I feel like 2010's Danger Days: The True Lives of the Fabulous Killjoys struck many fans the wrong way, and with my first listen I honestly wasn't a fan. I didn't get it: Where had my angst superheroes gone? How could I lock myself in my room and cry to this album about boys (or a lack thereof)?

But with the first single from the album Na Na Na (Na Na Na Na Na Na Na Na Na) — not as fun to type as it looks — something clicked. I understood why the band had completely scrapped an album to make this one instead. I got it. The band was happy so the music was happy, and the music being happy made me happy. The comic book effect of the Killjoy characters that the band gave themselves were a reminder that Gerard gave up his cartoonist career to form a band that would change the world: This was a thank you to what he had. I would kill to have a customized bright colored leather jacket and I think every fangirl fangirl-ed over the shot of Gerard tugging his jacket on. Matched with Gerard's red hair, this bright new look was a far cry from the extreme amount of guyliner in his recent past.

Then the band broke up. The artists went their separate ways and I've since moved on with my life and my fashion sense. Unfortunately, I've not really kept up with Gerard Way's music but luckily, his Twitter account is hilarious so I can still feel connected to a man I've never met but who changed my life. However, I love his new style: The pop art vibe of contrasting orange hair with blue suits. Although currently, his hair is the really lovely silver color that us mortals can never quite achieve, even with copious amounts of purple shampoo. Now touring his way through Europe, accompanied on stage with many feather boas and a pink monkey called Lola, I feel like Gerard has shown me that growing up doesn't have to mean growing boring.

As I transitioned through so many adolescent stages and as I probably move through multitudes of twentysomething cliches, I feel like Gerard Way's constantly changing looks move right along with me.

More like this
Most Comfortable Underwear For Big Butts
By Audrey Williams
How Skin Care Experts Are Stepping Up To Support Transgender Patients
By Audrey Noble
42 Black Owned Fashion & Beauty Brands To Support Today & Always
By Mekita Rivas, Shea Simmons, Kui Mwai and Dominique Norman
Social Media’s Favorite Fashion Influencer is Meredith Blake from ‘The Parent Trap’
By Morgan Sullivan
Get Even More From Bustle — Sign Up For The Newsletter