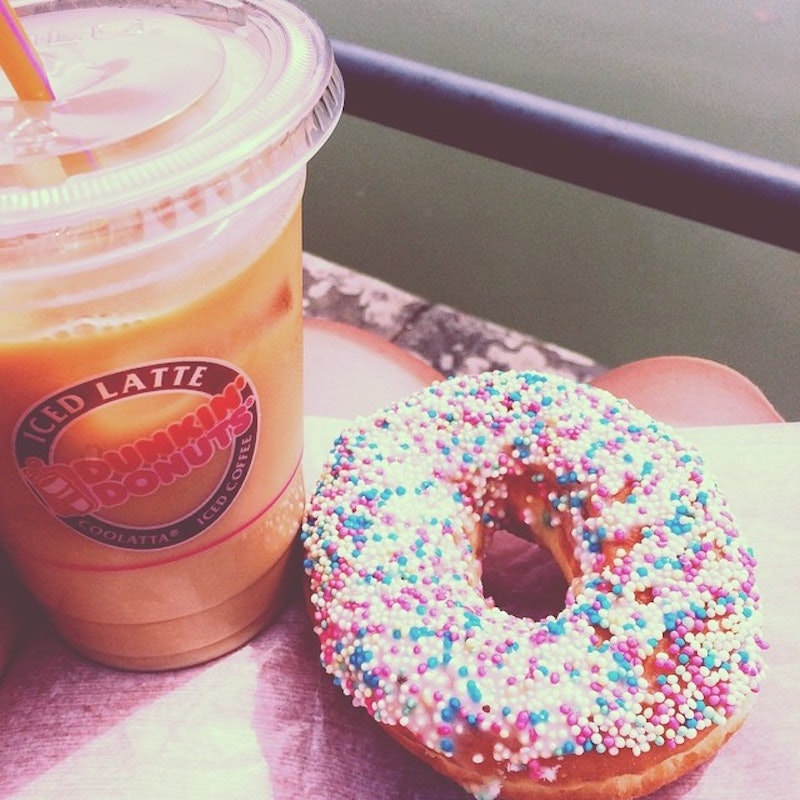 So, hey, remember earlier in January when Dunkin' Donuts was offering free coffee on Mondays in places like Iowa and Nebraska? Well, good news — the deal has finally made its way to the East Coast: New Yorkers can get free Dunkin' Donuts coffee on Mondays for the next few weeks in honor of Valentine's Day. Did that just make the beginnings of your next few work weeks awesome or what?

As has been the case with a lot of fast food and fast casual restaurants recently, this deal is being used as a means of promoting Dunkin's mobile app. According to the Asbury Park Press, customers using the app in the New York metropolitan area are entitled to one free iced coffee every Monday between now and February 16. True, that's only three Mondays — February 2, 9, and 16 — but hey. Three days of free coffee is better than no days of free coffee. Just, y'know... watch out for those styrofoam cups.

Of course, free coffee isn't the only thing Dunkin' has up its sleeve for Valentine's Day; you can also indulge your sweet tooth on a few other tasty treats. First off, the White Chocolate Raspberry Swirl Latte has officially landed, so if you like your java really sweet, knock yourself out. Here's what it looks like:

Second, two of the chain's most decadent donuts will be making a triumphant return: The Brownie Batter Donut and the Cookie Dough Donut (which, by the way, I think should have been called the Cookie Dough-nut). Brownie-flavored buttercreme fills the Brownie Batter variety, while the Cookie Dough version features — what else? — cookie dough-flavored buttercreme; both are topped with chocolate icing, and perhaps most importantly, they're also both heart-shaped. Because it's practically a law that all Valentine's Day specialty foods must be shaped like hearts:

If you missed both the Iowa/Nebraska/etc. free coffee promo and the New York one due to the fact that you live elsewhere, don't fret; I have a feeling that this "coffee on Mondays" thing is going to be a trend this year, so keep your ear to the ground — it might eventually arrive in your hometown or state. In the meantime, though, get ready to have a whooooooole lot of New Yorkers lording their free coffee over you. Sorry in advance, but, I mean... free coffee.