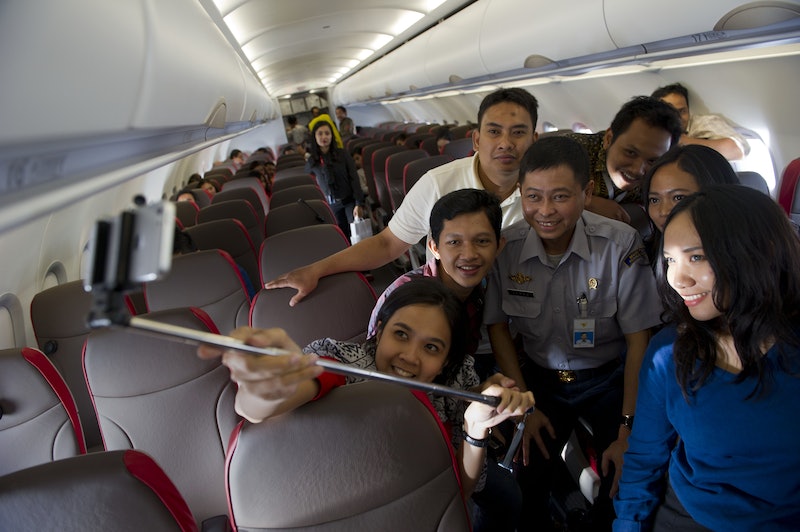 You may find selfies annoying or delightful or narcissistic or feminist or all of the above — or you may just be really tired of hearing people talk about the "revolutionary" phenomenon of taking a picture of yourself — but chances are you don't consider them a sin. Unless you are the Muslim cleric Felix Siauw from Indonesia who declared selfies to be sinful. But young people in Indonesia aren't really impressed by his perspective and have been taking #Selfies4Siauw in response.

Nothing stops the selfies! Nothing!

Siauw first explained his reason for considering selfies sinful on Twitter, and they seem to be an odd mixture of genuine religious concern about pridefulness and sexist double standards for women. "If we take a selfie, sift through and choose our best pose, and then we’re awed and impressed by our selves – worryingly, that’s called PRIDE," he said, as translated by Coconuts Jakarta. He goes on to add ways in which selfies encourage ostentation and arrogance, which I suppose could be true, though I personally don't feel like taking selfies makes me fell "better than others."

But then he added this, "These days many Muslim women take selfies without shame. There are usually nine frames in one photo with facial poses that are just – My Goodness – where’s the purity in women?"

Well, as might be expected, young women (and men) in Indonesia weren't so impressed with the religious leader's pronouncement. Siauw may be a young and popular cleric, but selfies are selfies. And, as it turns out, they are also the best weapon against the anti-selfie crowd. The selfie-ers like them, the haters hate them. It's perfect.

And thus the hashtag #Selfies4Siauw was born, with people chiming in not just from Indonesia, but all over the world.

Because here's the thing about selfies: they aren't a pathway to sin or a means of achieving self-confidence or fuel for the narcissism of those darned kids today. Selfies are a form of self-expression. They allow people not only to create an image of themselves completely on their own terms but also to then do whatever they want with that image.

For some people, selfies might be an outlet for narcissism or a way of fueling sinful pride. For others it might be an important tool for feeling good about yourself or building up self-esteem, to be able to show yourself in your best light all the time. And if nothing else, it's a way of saying, "I am here. I exist. This is how I want to be seen."

So whatever you think of selfies, they aren't going anywhere. Sorry, Siauw.