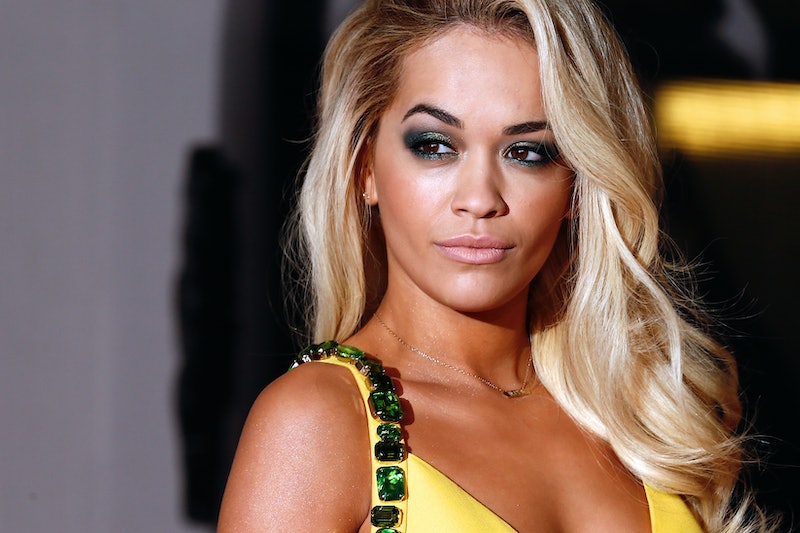 I would like to start this off by assuring you that it's totally OK to be excited for the upcoming Fifty Shades of Grey film adaptation. I know, I know: The book isn't exactly considered a literary masterpiece by critics — but, let's be real, the trailer for this movie was pretty hot and we're all going to see it no matter what we tell our friends. This is a safe place, guys, a judgment-free zone! You can own up to your Fifty Shades excitement here. Besides, when you think about it, there's actually a lot to be excited about when it comes to this movie: It's going to include a lot of shirtless Jamie Dornan, a star-making debut for Dakota Johnson, and it was all helmed by the director responsible for the critically acclaimed film Nowhere Boy, Sam Taylor-Johnson. There's a lot of promise, here! Plus, it's going to feature Rita Ora in a major role, and, considering what a massive pop star the 24-year-old is, that's going to be huge.

But, who exactly is her character? Those of you who have read the book may know this already, but for those who, perhaps, prefer to see the movie before reading the book, here's a handy little guide to help you figure out when exactly in the film to look out for Ora — and what to expect from her character, Mia Grey.

So, the first thing to know about Ora's role in Fifty Shades Of Grey is that she's portraying Mia Grey, the adoptive little sister of Christian Grey (together, the two of them also have one more adoptive brother, Elliot Grey).

Once Ana and Christian's lives become intertwined, Mia reaches out to Ana to become friends, and eventually she meets Ana's roommate Kate's brother...Ethan Kavanagh. Though Kate and Mia's adoptive older brother Elliot Grey are dating, Mia develops a bit of a crush on Ethan and wants to pursue a romantic relationship with him — but unfortunately, as with most romantic relationships in this book series, it's not without its drama. Though Mia and Ethan's story isn't as tumultuous as Christian and Ana's, they've still got their own little unrequited love story going on in the background: Basically, Ethan is worried that pursuing Mia romantically would be awkward because of Kate and Elliot's relationship. Like I said, not as tumultuous, but still, dramatic: Unrequited love is never as poetic or tragically beautiful as it seems.

I won't spoil the ending to their little love story, though. Something needs to be a surprise when you see the movie! (Although, the conclusion of Mia and Ethan's relationship will probably be saved for the subsequent film sequels, so...)

It's pretty impossible not to love Mia Grey. she's described in the books as "bubbly, vivacious," and she totally takes to poor, sweet, naïve Ana right away. Considering Fifty Shades is a story with a lot of angst and romantic drama, it's nice to know that there's at least a little a bright ball of sunshine amongst all that darkness — and Mia Grey is just that.

This girl. THIS GIRL. Let me tell you something about Mia Grey: not only did she study the cello and learn enough French to claim fluency, but she also studied cooking in the capital of amazing food, Paris (at least, it is according to Ratatouille...and that's good enough for me). I know we're all supposed to be swooning over Christian Grey and Ana Steele's story, but I sort of have a bit of a girlcrush on Mia Grey at this point: Girl is worldly.

She Can Rock A Bob Haircut Like NONE. OTHER.

GUYS, JUST LOOK AT THIS. WHO CAN PULL THIS HAIRCUT OFF IN REAL LIFE. I'm convinced that if there is ever another Fifty Shades Of Grey book, it will probably be about how Mia Grey secretly isn't a member of the human species and that's why she can rock a haircut like this better than anyone else I've ever seen in my life.