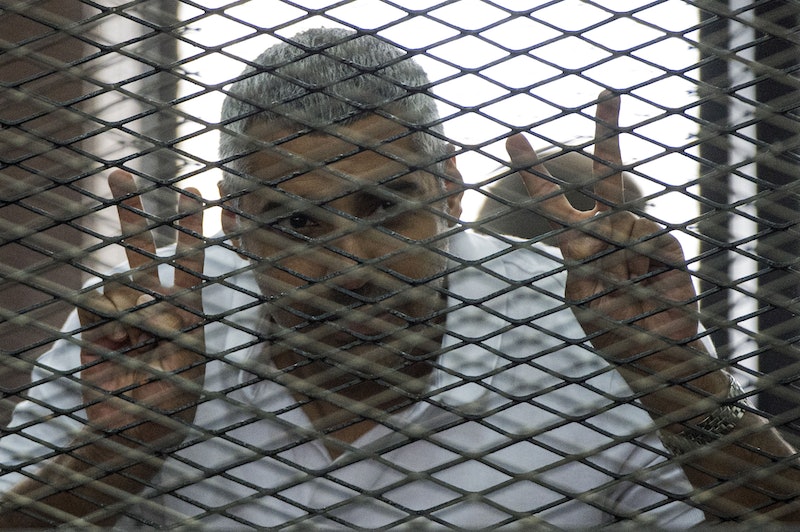 After being detained for more than a year for spreading false news, Al Jazeera journalist Peter Greste is finally headed home. Early Sunday morning, reports emerged suggesting that Egypt deported Greste for his native Australia, but there is no word yet on the status of his two colleagues, who remain in the custody of the Egyptian government. The arrest and subsequent imprisonment of the three journalists sparked international outrage, and their trial was largely considered a sham. Still, Greste's release seems, at the very least, to be a sign of cooperation to come, and Al Jazeera has welcomed the news while insisting that the other two men, Baher Mohamed, a producer, and Mohamed Fahmy, Al Jazeera's Cairo bureau chief, must be freed as well.

The three were arrested in December 2013 after being accused of working with the Muslim Brotherhood, an outlawed organization branded as a terrorist organization by some Egyptian officials. Al Jazeera has long been targeted as a supporter of the movement and having journalists aid their cause, which both the network and individuals have fervently denied. Despite protests from Greste and his colleagues, who have maintained that they were simply reporting the news, the three were jailed in June on charges of collaborating with terrorists. Both Greste and Fahmy were sentenced to seven years in prison, while Mohamed was condemned to 10 years.

Following mounting international pressure for the men's release, however, Egypt has shown signs of softening, which have culminated in the release of at least one of the journalists. In November, Egyptian President Abdul Fattah al-Sisi suggested that a presidential pardon could be in the works for the two foreign-born reporters (Greste and Fahmy), and in January, ordered a retrial for all three men. According to the Agence France-Presse, the decision to release and deport Greste came as a "presidential decision."

In a statement, Mostefa Souag, who is serving as the Director General of Al Jazeera Media Network said,

We’re pleased for Peter and his family that they are to be reunited. It has been an incredible and unjustifiable ordeal for them, and they have coped with incredible dignity. Peter’s integrity is not just intact, but has been further enhanced by the fortitude and sacrifice he has shown for his profession of informing the public.

We will not rest until Baher and Mohamed also regain their freedom. The Egyptian authorities have it in their power to finish this properly today, and that is exactly what they must do.

In a letter released by his family and published in the newspaper The Australian , Greste expressed his frustration over his unjust imprisonment, and maintained his innocence in the situation. Saturday marked the men's 400th day in prison, and Greste commemorated the occasion with indignation and apparent outrage. He wrote,

Despite all the talk, all the recognition of the injustice of our arrest, trial and conviction, all the diplomatic and political pressure, we are still in prison with an indeterminate stretch behind bars ahead of us.

Certainly, when we were arrested on Dec. 29, 2013, none of us or our families seriously believed the ordeal would last this long. The absence of evidence that we had committed any crime was complete, and we were all convinced that common sense would prevail sooner rather than later.

Very few Australians would understand what it's like to be innocent but still spend 400 days in a Middle Eastern prison. It is incredibly emotionally draining and infuriating. My primary hope is that one day something good comes of this.

He also added, "While we remain strong and determined to do whatever it takes to clear our names and win our freedom, 400 days still feels far too long to correct an injustice."

Al Jazeera, based in Qatar, is largely viewed as an incendiary and destabilizing media presence in Egypt, which is experiencing some of its worst violence in recent history, only adding to the tensions that exist within the country. Relations between Egypt and Qatar have been rocky at best, though recent intermediary efforts by way of Saudi Arabia seem to have eased some of the strain, and may have indeed contributed to Greste's release. Still, Egypt has given no clear indication that either Mohamed or Fahmy will be released, though sources familiar with ABC News have claimed that Fahmy's deportation, who is Egyptian-Canadian, "will follow."

While Greste's homecoming is certainly cause for celebration, Egyptian law requires that deported inmates complete their sentences in their home countries, or undergo a retrial. The BBC's Orla Guerin reports that it is "unclear whether the Australian authorities have agreed to that." Still, the Greste family will be able to begin February with a very important member of the clan back on home soil.