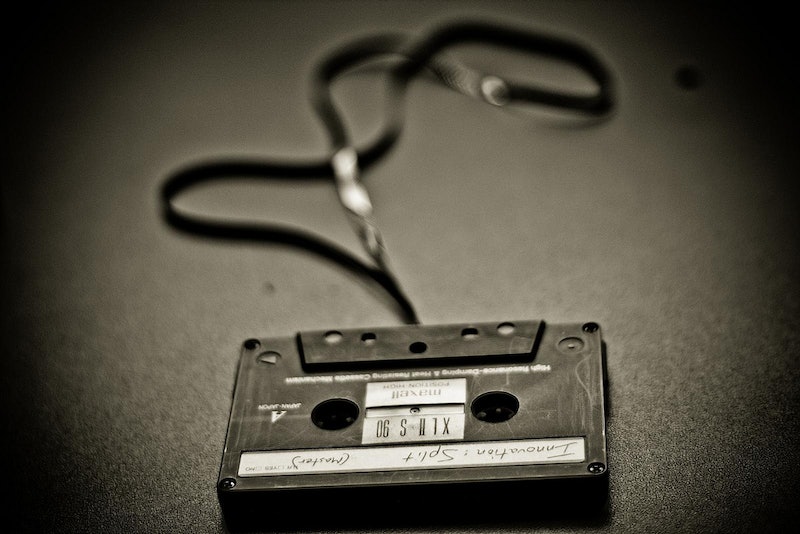 I both made and received my fair share of mixtapes in high school, whether they were for friends, crushes, or my boyfriend. I love the sentiment behind creating them — thinking of the perfect songs in the perfect order to perfectly express your feelings for that person at one very specific moment in time.

Even though I never made a mix “tape” — they were always CDs — it’s a bit disheartening that the art of crafting a true mixtape seems to be disappearing. I mean, sure, you can send someone a Spotify playlist, but it’s just not the same as creating something tangible— burning it onto a disc, drawing pictures on the case, handwriting each track title. Creating the perfect mixtape is truly an art (as Rob from High Fidelity attests).

It’s been a long while since I’ve gotten a handmade tape, but I’m still able to foster that nostalgic feeling through all of the fictional characters and lovers who create their own. Drawing from the best books with mixtapes (plus a few others that are highly influenced by specific songs), I created my own literary mixtape just in time for Valentine's Day:

Perks of Being a Wallflower by Stephen Chbosky

After Charlie (whose best friend up until this point was his English teacher) exchanges Secret Santa gifts with his new friends Patrick and Sam, he makes a two-sided tape for Patrick with the hope of making him "feel like he belongs to something whenever he's sad." Described as "winter kind of songs," his B-side most famously includes The Smith's "Sleep" and The Beatles' "Blackbird."

The Nao of Brown by Glyn Dillon

The Nao of Brown is a graphic novel about a 28-year-old woman, Nao Brown who lives with OCD and is constantly fighting the urge to harm other people. One other aspect (that's also much less dangerous) of her compulsion is an obsession with songs whose titles begin with "Oh!"

Track #3: "I Wanna Be Your Boyfriend" by The Ramones

The book begins with Nick, playing bass guitar and feeling heartbroken (like most fictional teenage musicians) over his ex-girlfriend who happens to be at his show. He asks Norah, a stranger, to pretend to be his girlfriend for a few minutes to make Tris jealous. From then on, Nick & Norah have a very uncertain, back-and-forth relationship that teeters from friendship to more than that. Music plays its own character in the novel, and Joey Ramone's "I Wanna Be Your Boyfriend" is just one (albeit perfect) example of their relationship.

I'd argue that Nick Horby's High Fidelity is actually one long mixtape. Rob, a record store owner and pop music lover whose girlfriend leaves him for the guy upstairs is constantly creating top five lists — everything from "Top Five Track 1, Side 1s" to "Top 5 Things Rob Misses About Laura." "Alison" comes up on his "Top Five Elvis Costello Songs," because, oh yeah, there's a list for that, too.

One Day by David Nichols

Even though all of the track titles from Emma's mixtapes to Dexter weren't named, author David Nicholls released a playlist of the tapes, including songs he believes she would have included. "These Days" by Nico is one of these songs, and it perfectly incapsulates Emma and Dexter's beautiful (yet tragic) relationship.

Track #6: "I'm Sticking With You" by The Velvet Underground

Alan Warner's novel follows Movern, whose boyfriend commits suicide and leaves behind a mixtape and manuscript called "Music For You." "I'm Sticking With You" is just one of its songs. The songs on the mixtape make up the soundtrack for the 2002 film adaptation.

Track #7: "Love Will Tear Us Apart" by Joy Division

Music plays a central role in this unconventional story of young love. Shortly after Eleanor and Park first meet on an Omaha school bus, Park introduces her to Joy Division in the first mixtape (of many mixtapes) he makes for her. Even after the first few seconds of the first song, Eleanor says that she could listen to it over and over and over again. So she does. And they do, together. Park's next mix tape is nothing but "Love Will Tear Us Apart" on repeat.

Boy Meets Boy is the story of Paul, who screws things up with his crush/"love-of-his-life" Noah, he's willing to do anything to win him back. Though the song is never really mentioned in the book, Leviathan mentions Patti Smith's "Tony" in the Acknowledgements. He said on his website, "You could say I wrote a whole novel to change one song's ending."

In the summer of 2004, best friends Archy and Nat are also the proprietors of failing Brokeland Records, a used record store in Oakland, California. Made up of multiple, interwoven plot lines and themes similar to a classic "American Novel," Carole King's "It's Too Late" is played at a climactic time for these two friends, their families, and their changing relationship with their passion — music.

A Visit From The Goon Squad by Jennifer Egan

OK, so it's not exactly in a mixtape, but Jennifer Egan's A Visit From The Goon Squad is filled with amazing music references (the central characters are an aging rocker/record executive and his assistant, Sasha). This uniquely formatted narrative includes an entire chapter written with Microsoft Powerpoint to symbolize Sasha's autistic's son's obsession with pauses in music — which is where David Bowie's "Young Americans" comes in.