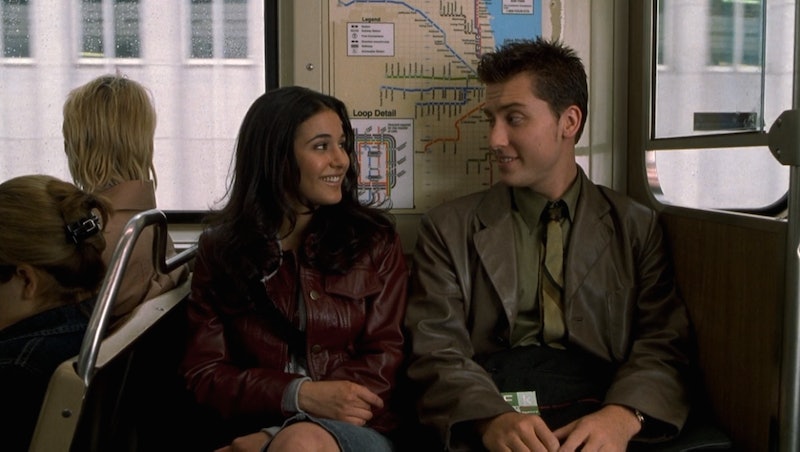 Congratulations are in order for Lance Bass, who's debuting Lance Loves Michael: The Lance Bass Wedding tonight on E!, an event that will mark the first televised gay marriage. FYI, Lance was my favorite member of N'SYNC (I thought he was just dreamy) so, I'm happy for the two. However, that doesn't mean I've forgiven Lance for 2001's On The Line, an almost adorably bad film that coincidentally is today's Throwback Thursday bad movie rewatch.

The plot is pretty simple: mild-mannered ad man Kevin (Lance) has never been one to take chances. One day, he meets a stunning, Al Green-loving girl on the subway (pre-Entourage Emmanuelle Chriqui) and they have an instant connection. One problem: Kevin choked it and didn't ask for her name or number! So he puts posters up around Chicago looking for her, winning a reputation (and several phone calls) for being a hopeless romantic. But, what happens when his ragtag team of besties (including fellow N'SYNC-er, Joey Fatone) intervene and try to snatch up his dates? Wackiness, that's what.

So yeah, it's predictably terrible and as is tradition I've chronologically captured why. But I am glad that Lance has move forward from this in a big way. Cheers to Lance and his soon-to-be hubby Michael Turchin, but we'll never forget ...

1. A cover of "Two Princes" that is either done ironically or in earnest.

The fact that I can't tell is unnerving.

Like, I was 3 at this time this flashback would've taken place, but I've done enough nostalgia listicles to be pretty damn sure bleach streaks and denim vests weren't a look in the grunge era.

4. These are the first computers I remember from grade school.

5. This guy's making a green smoothie.

It means two things. 1. He's roughly a decade ahead of his time and 2. He's going to fashion week. Like every other journalist except me.

Okay, the average 24-year-old male's idea of "business casual" is like, a flannel button-up and jeans. This guy is decked out in like, Prada's Shire-inspired collection, with forest greens and milk chocolate browns that both bring out his eyes and compliment his hair.

Let's be real, the only thing sadder than covering "Pour Some Sugar On Me" is actually being Def Leppard.

9. “You just spent a weekend with your boyfriend of three years who you haven’t seen in two months.”

"And he doesn't support you emotionally because he's too invested in work. And you're feeling conflicted because you just had a meetcute with someone you really connected with. And now he's going to put himself on the line trying to find you because he thinks it's true love. And there's going to be a series of wacky missteps and miscommunications that will set you apart but ultimately he'll redeem himself and you'll end up together."

Like. Rom-coms, though. Does anyone's BFF/roommate in these movies serve any other purpose aside from emotional support and plot-explaining?

It plays during his big montage, and it has some masterful lyrics: "I'm laying it/On the line to show you/I'll never let you go/On the line for your love/There's nothing I want more"

11. This guy is playing Gameboy Color without a cartridge.

They didn't have the budget for Pokemon Red.

That and the '80s hair metal cover band really must have gone over well with N'SYNC's tween fans.

14. These guys have a full schedule laid out on how they're going to date all of Lance's lady callers.

So good to know dating pre-Tinder was horrific, too.

Clearly me, two years after 'On The Line,' making fun of all the preps for their love of Britney Spears (despite owning and loving all of Britney's CDs two years prior).

REMEMBER WHEN THAT WAS A THING? Why is that NOT still a thing? Am I the only one lamenting a time when that was a thing? (Probably yes, see above cameo).

17. These roommates use all their free time making NEW posters to find Lance's L Train girl.

Do they not have jobs or something? No, forget it, I think the dating schedule answered that question.

18. They should easily find her with that stunning likeness.

19. Kevin has enough money to overtake every billboard in Chicago.

20. “Are you sure you don’t want the team there for moral support?”

You guys have literally ruined everything, so I'm gonna go with no.

21. Ugh, most unflattering picture ever.

I mean, okay, Emmanuelle's version of "unflattering" is still better than me on my best day, but they could've gotten a better shot at this.

Like seriously, this movie's pre-Facebook, but it's the kind of photo you'd untag.

Did not have enough money in the budget for JC Chasez either. COULD NOT AFFORD JC.