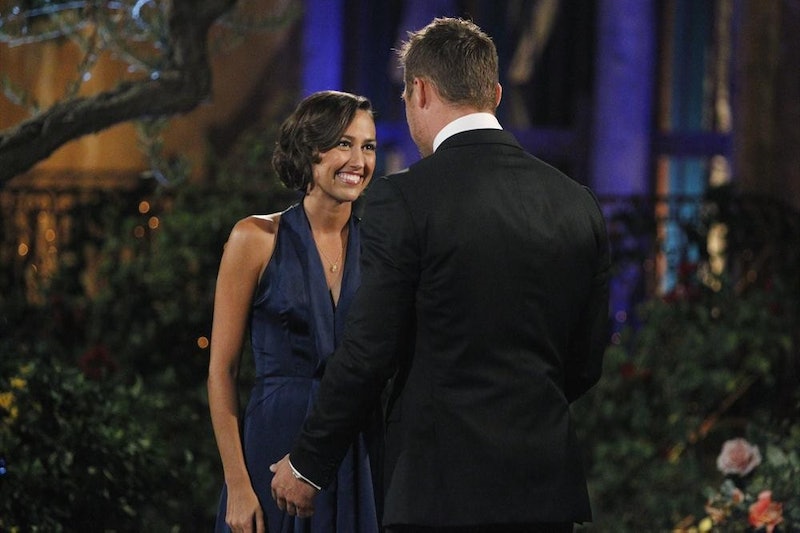 For someone who was relatively invisible on The Bachelor until last week, Kelsey is sure being made the villain all of a sudden. Not, of course, that I don't agree that it's the right role for her. I had absolutely no opinion on her, and then suddenly, she was on the group date at the lake, complaining as often as she breathed, and instantly, I knew she was not the right girl for Chris Soules. After all, if she can't tough it out on an overnight camping trip, how is she ever going to last in the isolated cornfields of Iowa? Her attitude left a lot to be desired, and this didn't get by her fellow contestants, who were also unimpressed. Everyone's there to play the game and maybe have a little fun; I'm not sure what Kelsey is there for. And it's made even less clear by the events in The Bachelor promo for this week: enter the Kelsey Bachelor breakdown.

Kelsey's unraveling hasn't been going on for long — at least, not according to what ABC chooses to show us — but the power behind it appears to be strong. Here's everything we know about her impending breakdown... and what it might mean for her future on The Bachelor. (I'm not too optimistic.)

The Basics: The ABC Promo

In the preview for Monday's episode alone, we see Kelsey get super aggressive about Chris all of a sudden... followed by the rest of the bachelorettes immediately turning against her. I realize that these trailers are highly edited for ABC to make us see what they want us to see, but I really don't think Kelsey being conniving is an editing issue. Also, she mentions she's done something that's making her want to avoid Chris and the rose ceremony, then ends up on the floor, apparently having a medical emergency. Drama ahoy!

The Madness Going Down In Santa Fe

In an exclusive clip over at E!, we find out that Kelsey's been biding her time before she has to make a major reveal to Chris about her past: She's been married before, and she's 100 percent convinced that this fact will change the way he sees her and make him fall in love with her. She makes the decision to bring out the "gamechanger" because she's jealous of Britt and says she is a "threat to my relationship with Chris." Yikes.

It's obviously really sad that Kelsey lost her husband, and no one should ever have to go through an experience like that. But using it to take down a "threat"? Not sure if that's a quality I admire.

Make of this what you will, but I am relatively sure that all of this added up means that Kelsey's not long for this Bachelor competition. On the bright side, at least she'll never have to go camping again?

More like this
Everything To Know About 'Bachelor' Host Jesse Palmer
By Justice Namaste and Radhika Menon
Former 'Bachelor' Producer Elan Gale Knows The Secret To Your Favorite Shows
By Samantha Rollins
It’s Official: 'The Bachelorette' Is No Longer A Fairy Tale
By Samantha Allen
Why Did Meatball Leave 'The Bachelorette'? His Second Chance Didn’t Last Too Long
By Grace Wehniainen
Get Even More From Bustle — Sign Up For The Newsletter