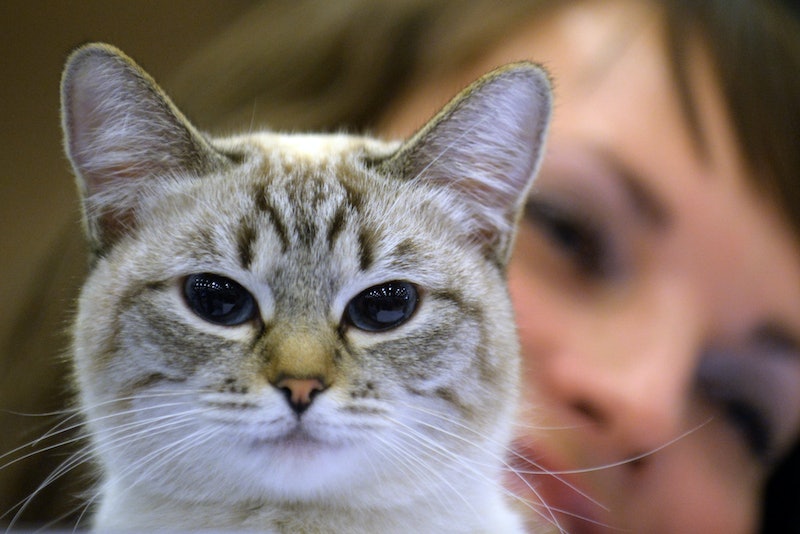 True story: as a child, I lived next to a bona fide, card-carrying crazy cat lady. She had one half of her hair dyed white and the other black, in what appeared to be a deliberately Cruella DeVille fashion statement, and must have owned upwards of 10 cats. Her prize was Oscar, a flat-faced fluffy grump who looked like a spoilt pancake, and had loud nocturnal fights with a local feral cat the size of a small panther. Aside from Oscar, my sole interaction with cats growing up was the occasion when I left my bedroom window open on a hot night, and woke up to find myself surrounded by sleeping cats. At least six of them. That is not an experience that endears you to felines.

With careful training by a cat-loving husband, however, I am beginning to understand the species. Which bits they don't like to be touched, what a twitching tail means, what signals equate to I Am Going To Bite You Immediately You Disrespectful Human Lump. We have a local cat, affectionately nicknamed Alfie The Party Cat for his propensity to turn up at human parties and lie on the dance floor demanding cuddles. He's only threatened to bite me once. I think I'm making progress.

Humans have been domesticating cats since at least the heyday of Ancient Egypt, and quite possibly longer, but cats refuse doggedly (pun intended) to be easy to understand. For the benefit of those fellow cat novices out there, I've put together a user's guide to felines. Beware the sharp bits.

1. Let me smell and see you first.

Surprising a cat is basically the worst idea you've ever had. It will result in the cat leaping in the air and sprinting away from you, leaving you miserably deprived and the cat deeply suspicious of your Clearly Suspect Behavior.

You don't need to get down to their level and wheedle at them in kitty-language (which is seriously undignified), but let them see you coming, and put whatever hand you're planning to use to stroke them in front of their nose, so they can see it's not covered in teeth. It's asking permission to approach, and it's good cat manners.

2. Go for the sides of the cheeks.

If you're at a serious loss as to how to endear yourself to this fat fuzzy thing looking at you quizzically, do not make a grab for it and tell it what a good snookums it is. Just use the crook of a finger to rub the scent glands behind the whiskers. Cats are deeply sensitive in that area, and will probably gratify you by bunting their head against your hand asking for more.

Cats are not babies. Unless they're seriously used to being picked up — and there are some, very human-focussed cats who love it, including a pair of Russian Blues I catsat once who were only happy if you cradled them like babies — they may resist it, particularly if they don't know who the hell you are. The most you can hope for, with a new cat acquaintance, is settling on your lap for some purring.

And it should go without saying, but charging around after it going HERE KITTY KITTY is not a nice game or an effective bonding tactic. It says to the cat, "Here is a lunatic who is threatening me. I will hide in the airing cupboard and later pee in its shoes."

4. Stroke me under the chin, behind the ears, and the top of the tail.

This is another scent-gland thing. The jawbone, the bits behind the ears, and the very top of the tail are all areas that the cat uses to scent things, and they're correspondingly very sensitive to being touched. Don't pat them (cats hate that), just stroke them gently.

5. Stroke my full back, head to tail.

If you're getting some headway now, begin a full head-to-tail stroke. Don't actually stroke the tail itself, as some cats hate it. And only ever stroke in the direction of the fur; cats spend ages grooming, and having you come in and mess up their nice coat is a good way to get yourself a paw up the nose.

6. Pay attention to my tail language.

Cat body language is actually pretty expressive, but if you've never spent any time with one they may as well be speaking Ancient Greek. Tails are a fairly good shorthand, though. Up is good (and the tip of the tail twitching too is great), down is bad, moving back and forth slowly is ambivalent (it means they're sussing out a situation or possibly about to pounce), but a quick movement is very bad indeed, and if they look like they have a bottle-brush attached to their rear end, flee with judicious haste.

7. Don't go near my belly or feet unless you really know me.

That cute thing where they roll on their backs and wave their paws in the air? They're not asking for a belly rub. It looks adorable but that is NOT WHAT THEY ARE DOING. Dive for the belly fluff and you'll a) get swiped or b) get playfully bitten, neither of which is probably what you wanted from this.

Feet are in the same basket. They're adorable, we get it, you want to fuss with all their little toes, but don't, because there be claws. If it's your cat, though, this might be a different story.

8. Purring is good, as are random noises.

Cats purr. This is a thing that cats do, and it's a pretty good indication that you're doing a correct thing; they don't just purr politely if they think you're putting in a good effort. Some cats, however, will also chatter at you a bit, in a high-pitched voice. This is fine, and means they're trying to be friendly.

Anything that doesn't sound friendly probably isn't. Hissing, growling and spitting are grade-A signs to bugger off, and you're going to get cat-punched if you don't.

As with dogs, some cats didn't learn from their litter-mates that biting isn't polite, so they'll do it as part of their enjoyment of petting. More often, though, biting either means Stop This Nonsense or Time For Wrestling; if they wrap themselves around your hand, swipe at it with their paws, wriggle and nip at it, they're playing. This sometimes happens if you go for their belly, and it's actually a good sign; it's genuinely called love mauling.

10. My eyes and ears are a good indicator of my enjoyment.

If you're not sure how to read a cat's feelings about your brief encounter, check out their eyes and ears. The perkier the ears, the happier the cat; if they're pointing forward, the cat's alert and happy, but if they're pointed back or flat against the head, they're scared, angry or freaked out. And sleepy eyes and half-blinking are far better than wide-awake stares or constricted pupils, as they mean Cat Is Deeply Relaxed And Wants More Of This Petting, Please, Human Peon.