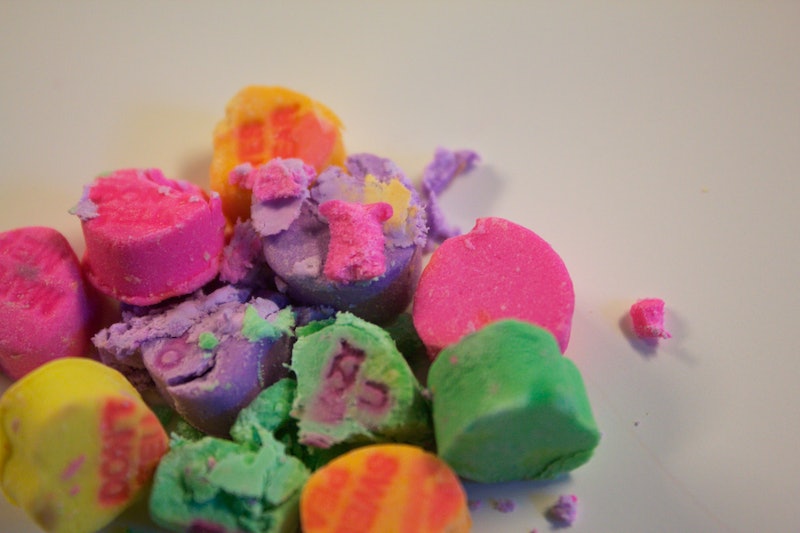 The only thing my love life lately has in common with those iconic candy heart quips dating back to the 1800s is a gritty after-taste even wine of the same age can’t wash away.

It’s similar to the disappointment that follows from wasting calories on something that you didn’t even crave in the first place. For example, Reese's-shaped hearts top those chalky message hearts any day in the same way a spin class is worth your time more than that first (and last) date with a guy who had a “man child” tattoo peeking through his skin tight shirt and FaceTimed his mom while you took another gulp of the margarita he ordered. Sex in a Mexican Prison was its namesake, and after your stomach cried, you knew exactly why. (True. Story.)

Because it's good to laugh at yourself, and because it's Valentine's Day, I’m celebrating the tradition with a mouthful of candy hearts all written with revised messages I feel reflect my recent relationships much more accurately. I hope you find my reactions amusing, as well.

I met a 30-year-old accountant on Tinder (I know how that sounds), and shockingly our first date turned into a two-month thing — you know, it wasn’t exclusive, but it was on the verge of becoming something committed, so it was time to figure s*%# out.

By this point, I realized that we were still at such a superficial level, and I didn’t see it going any deeper (I had plenty of time to justify this when I didn’t hear from him for two weeks while he was away with his buds in Europe... it’s called email, OK, before you take his side).

So, when he texted me WAY after he got home from his trip, I very nicely and honestly let him know that I didn’t think we were a long-term match. And he reacted calmly — before he went completely crazy.

We’re talking blocked calls, hang-ups, and drunken text messages that said, “I love you... and your dog. My boss loves you too.” (Why was there a hesitation before my dog? And by the way, I’ve never met his boss.) After seeing pictures of a trip I had taken to Louisiana, which I can only assume he tracked on Instagram, he drunkenly vowed to travel to the “Deep South” to bring me back until he could make me love him.

But, what went way too far was when he found my mother on Facebook and sent her a message, asking her to convince me to date him, leading with, “I know you get a lot of these love notes for your daughter, but....”

Meet the foreigner who fancied fitness more than me.

He was a hot Aussie with a sick, rowing body and an accent I couldn’t resist. That is until I realized how serious he was about working out, mate.

It started off as a Sunday afternoon playing Frisbee (well, he played and I goofed off, while he kept trying to fix my “technique.” I laughed it off as a joke, but then it got serious.) Our second date was to grab drinks after his Soul Cycle class. That was normal enough. I mean, I take spin too. But I shower before going out. Don’t you? Not this guy. He reeked.

What really ended it, though, was when he wanted to race to see who would get to the bar the fastest by foot.

Hugs & Kisses... For Himself

Have you ever dated the artsy, angsty type? Chyeahh, mine lived in Bushwick and had the full leg tattoo to prove it (his words, not mine). I once asked him while drunk if he had ever considered journaling the symbolism he wanted to add to his massive leg tattoo instead of inking it so that he wouldn’t have to have needles get any closer to his crotch. He laughed, but I was kind of serious.

He was a designer of yogurt (I didn’t really get it either), and he would stop at random times on the way to dinner because he was “just so inspired” staring off once at what he said was “a glistening stained glass window with cobwebs flowing as if they were antique curtains” while I stood there quiet and confused, because all I saw was a rat the size of a toy poodle scurry away from a homeless man’s stream of piss.

I also caught him once staring at himself in a mirror blowing air kisses.

I went on a date with Casper — Casper the friendly ghost. We spent a magical eight-hour long date together that took us from the Boat Basin on the Upper West Side to the Coney Island boardwalk, hand-in-hand, ice cream and all. He even won a stuffed bear for me.

We said goodnight, made plans for the next day, and then, poof he was gone. It was my first experience with the phenomenon ghosting, until I did it myself.

I finally chalked it up to the real possibility that he was hiding his wedding ring the entire time and has kids in Connecticut. I knew I should have made him empty his pockets....

So run like Gump, ladies, and be careful with those boxes of chocolates from creepers he warns us about this Valentine’s Day: you never know what you’re gonna get in the modern dating scene (at best, a match made in Tinder heaven, and at worst an STD). Sigh, compared to the guys I’ve dated, ol’ Forrest is starting to look like a, messy-bun-wearin’, hot philosophy professor who just gets me, you know?