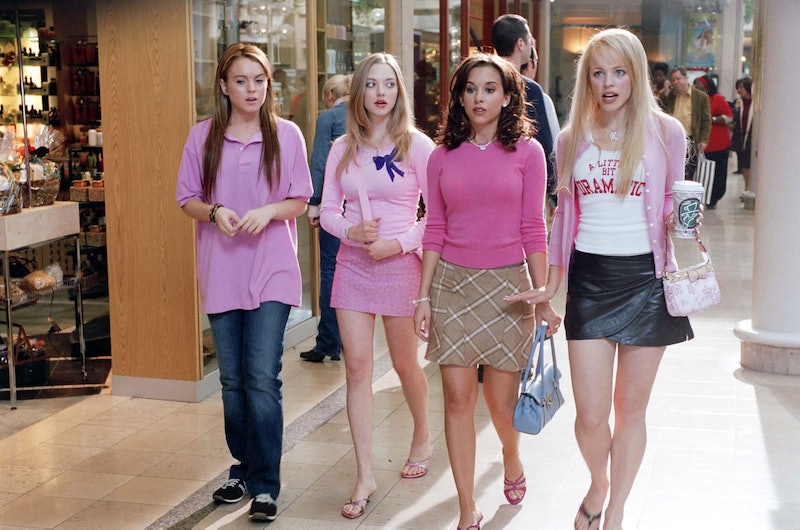 In case you haven't heard already from half of your Facebook friends, it's Oct. 3, which has essentially become an unofficial Mean Girls holiday. For anyone out there who isn't a superfan of the 2004 Lindsay Lohan film, it's not the anniversary of the movie's release — that'd be April 30. Oct. 3 is the fateful day that Lohan's Cady Heron had a non-weather-related interaction with love interest Aaron Samuels (Jonathan Bennett).

It was in the back of Ms. Norbury's (Tina Fey) senior math class, and it was unforgettable. To commemorate the day that Aaron told Cady it was, in fact, Oct. 3, your friends will tweet, tumble, Facebook, text and presumably say in real life, "it's Oct. 3," or "what day is it?" hoping the other person picks up the reference. Can it get a little repetitive and overwhelming? Of course, but we all miss Mean Girls and until we get that musical Fey and her husband have been talking about, Oct. 3 and ABC Family are all we have.

So as a way of celebrating Oct. 3 that doesn't involve just reading the date over and over, here are just some of the ways that Mean Girls has changed the world — or at least, the Internet. (Spoiler alert: So many mash-ups!) But first, it can't hurt to look at that infamous scene just one more time.

But how has Mean Girls changed the world? Let us count the ways...

The super hilarious Mean Girls of Panem tumblr combines stills from The Hunger Games with lines from Mean Girls, and the result is amazing. These are just a few of its best posts.

The official White House Instagram page posted this, and it was amazing. Whoever runs the White House's social media is grool.

The name Jonathan Bennett probably doesn't familiar, but he's the actor who played Aaron Samuels. And based on his Twitter bio, he's pretty proud of it. (As he should be.) Obviously the "Happy Oct. 3rd" part is temporary, but the hair reference is always there. Bennett hasn't starred in many high-profile projects since Mean Girls, so it's nice to see him embracing the role he'll always be known for.

You know what else goes great with Mean Girls? Disney. We all know those princesses were talking shit behind each other's backs.

A genius-level Mean Girls fan at Buzzfeed realized that the government shutdown is exactly like the movie in many ways. Without Mean Girls, how could we understand what's happening in politics?

If there are two things Tumblr loves, it's Harry Potter and Mean Girls. Some of its most creative users have combined the two into every Millennial's dream. Let's add this to the list of Harry Potter spin-off ideas.

Lizzy Caplan played Janis Ian, and was clearly perfectly cast. No one will ever top her in insults or Spring Fling-wear. Caplan has gone on to have even more great roles, on short-lived classic shows like Party Down and The Class and films like Save the Date, Bachelorette, and Cloverfield. Between her new Showtime series Masters of Sex and upcoming movie The Interview, we're hoping she finally gets the recognition she deserves, and an identity outside of her iconic character.

There is literally nothing Amy Poehler can't do. The actress/writer/improv performer/comedian/humanitarian/role model can add rapper to her impressive resume thanks to Mean Girls. We all know that she played Regina's mom in the movie, but this video shows that while Kevin G may be a math enthusiast and badass MC, he's got nothing on Amy P.

At least we can all rest easy knowing that young North West will be exposed to the most important film of all time. OF ALL TIME.

The Mean Mad Men tumblr finally creates the mashup we've all been waiting for, Mean Girls and Mad Men. Is Betty not a 1960s Regina George? And if anyone's hair looks sexy pushed back, it's Don Draper.

Where would the world be without Glen Coco? He is easily the most important barely-seen character in film history. He's so shrouded in mystery. Who are the candy canes from? Four different people or one with a huge crush? What was he up to while Cady was infiltrating the Plastics? Was one of the candy canes from a Plastic? Who did he vote for Spring Fling king and queen? I would like to dedicate this Oct. 3 to Glen. You may not have been in that scene, or technically any other, but you've inspired thousands. You go Glen Coco.