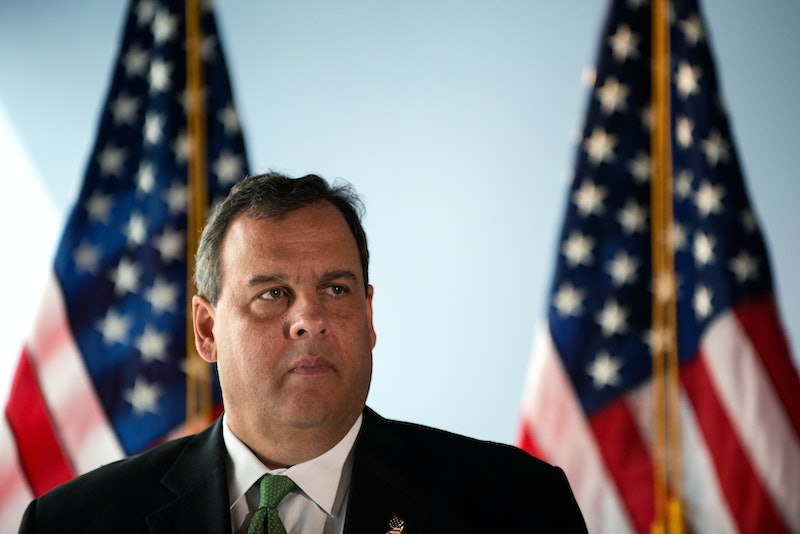 Something worrying's been going on in the state of California recently: a burgeoning public health crisis that, sadly, didn't have to be. I'm referring to the needless outbreak of measles, a hyper-contagious, thoroughly preventable disease that's resurfaced as a result of anti-vaccination politics, a particular scourge in the Golden State — after a widely reported outbreak at Disneyland, there have been 59 confirmed cases of measles in California. Now, both President Obama and Chris Christie are talking vaccinations, shining a light on a crucial (and, frankly, pretty frustrating) public health divide of our times.

And in this case, it's the Democrat President who came out more straightforwardly and forcefully in support of vaccinating your kids, despite the fact that the Republican New Jersey Governor confirmed his own children's vaccinations. Despite the California anti-vaccine crowd having a largely well-deserved reputation as an upper-class liberal folly, the politics on this run deep — given anti-government conservative attitudes, and orthodoxies on parental autonomy, it's still not exactly safe to suggest vaccination should be mandatory.

Nor are Republican politicians above buying into debunked pseudoscience, not by a long shot: you may remember former Representative and 2012 presidential candidate Michele Bachmann claiming that a vaccine against the human papilloma virus caused "mental retardation." So, what do Obama and Christie have to say?

President Obama Wants You To Vaccinate Your Children

Speaking to NBC on Sunday in advance of the Super Bowl, Obama addressed the measles outbreak head-on, and made a straightforward, qualification-free plea to parents: don't listen to the conspiracy theories (or that long-debunked, famously fraudulent study). Instead, vaccinate your kids.

I understand that there are families that, in some cases, are concerned about the effect of vaccinations. The science is, you know, pretty indisputable. We’ve looked at this again and again. There is every reason to get vaccinated, but there aren’t reasons to not. You should get your kids vaccinated. It's good for them and the challenge you have is if you have a certain group of kids who don't get vaccinated, and if it grows large enough that a percentage of the population doesn't get vaccinated and they're the folks who can't get vaccinated, small infants, for example ... they suddenly become much more vulnerable.

It was a highly apropos topic to bring up, both because of the extent of the problem with measles — there have reportedly been 84 cases in the United States over the last month — and because Obama's interview was running in advance of the Super Bowl. With some measles cases arising in Arizona in the week leading up to the big game, state health officials were fearful that it could serve as an incubator, furthering the spread of measles to many more people.

Chris Christie Says Parents Need To Have A "Choice"...

Speaking on the controversy Monday, Christie made it very clear what his own preference is, stating that his children have been vaccinated, and that he thinks its in the best health interests of them and the public at large. However, he added a very conspicuous qualification to that opinion, insisting that parents must have "some measure of choice" in the matter.

Mary Pat and I have had our children vaccinated and we think that it’s an important part of being sure we protect their health and the public health. I also understand that parents need to have some measure of choice in things as well, so that’s the balance that the government has to decide. ... Not every vaccine is created equal, and not every disease type is as great a public-health threat as others.

... And He's Flirted With The Anti-Vaccination Movement Before

However, as pointed out by The Daily Beast's Olivia Nuzzi Monday, Christie's track record on this issue raises some red flags. At the very least, when he was first running for governor back in 2009, he was all-too willing to exploit skepticism about vaccines, in particular the most common, damaging scare story about them — that they're linked to autism, a canard that persists years after the lone study suggesting such a link was thoroughly debunked. A 2009 campaign letter implying this link, which Nuzzi highlights, makes Christie's current waffling on vaccination seem a lot less innocent.

I have met with families affected by autism from across the state and have been struck by their incredible grace and courage. Many of these families have expressed their concern over New Jersey’s highest-in-the nation vaccine mandates. I stand with them now, and will stand with them as their governor in their fight for greater parental involvement in vaccination decisions that affect their children.

Obviously, people will court a lot of shady constituencies when they're trying to bring home a gubernatorial race, there's no doubt about that. But with this issue cresting at the moment, and such a decidedly worrying past statement of support — "I stand with them now, and will stand with them as governor" — this is something you can rest assured we'll hear more about if Christie runs for president in 2016 as anticipated.

To put it bluntly, the risks many children are absorbing through these misguided anti-vaccination attitudes are no trifling matter, and attention must be paid to politicians who pander to them.