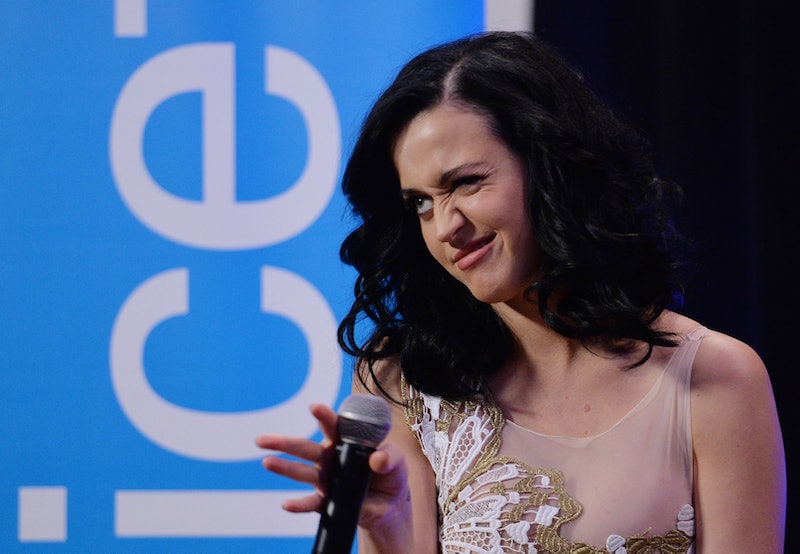 Ever since Taylor Swift released "Bad Blood," the wild speculation of a "feud" between Swift and Katy Perry has reached epic levels of ridiculousness. And there's really been no sound proof — only Swift claiming someone tried to sabotage her arena tour and Perry promptly tweeting her now-infamous Mean Girls reference. Regardless, this is the kind of stuff that gets fans going, so of course, after Katy Perry's Super Bowl half-time show performance, people started looking for any signs of subtle shade thrown at Swift, but you have to get pretty creative to see anything suspicious here. For instance, half-time dancers in '50s style bathing suits being a diss to Swift. Sure...

A few days prior to the half-time show, Perry seemed to acknowledge Swift in a Billboard interview when, after being asked about the supposed feud, said, "If somebody is trying to defame my character, you’re going to hear about it." Naturally, that meant that if she had a once in a lifetime opportunity to perform a 12-minute set at the SUPER BOWL she would use that to talk about a petty feud, right? I venture to say Perry is a bit smarter than that, but the Internet has found a way to pit two women against each other and just for fun's sake, I engaged in a thorough examination of dancing sharks and beach balls to see what theories were out there, and explore some of my own.

Back Up Dancers in High-Waisted Bathing Suits

The tweet that started it all. A very pressed Miley fan (it seems) tweeted the above reference which got website Hollywood Life talking about what Perry really meant with the high-waisted bathing suits. OK, so, a regular two-piece bikini might have been more suited for the flashy Super Bowl, but Katy Perry has been inspired by the throwback, pin-up look throughout much of her career. If this is indeed a diss, it's one of the nicest disses ever, like, "Hey, girl, I don't like you, but I really love your style!"

Never underestimate the comments on blogs because that's where the true genius lies. A user on Hollywood Life, "Sammy," wrote a pretty well though-out theory I just had to share. The commenter claims that with her set Perry was referencing Swift's lyrics for "Dear John" in which she sings, "And I lived in your chess game, but you changed the rules everyday." And who is Swift singing about? Perry's possibly now back-on boyfriend John Mayer! This is maybe the best (and most complicated) way of telling a girl to back off.

Remember when Swift said someone was trying to sabotage her arena tour? Well, details came out that some of Perry's dancers had left her for Swift's Red tour, but in the middle of the tour, Perry reached out to them again for her Prismatic World Tour. One of the three dancers that left Swift turned out to be Scott Myrick, who revealed himself to be one of the sharks that stole the spotlight during the Super Bowl show. OK, I can see that being a little bit of a blow...

Sharks Out For "Bad Blood"

Sorry, but since the dancing sharks pretty much won the Super Bowl, I have decided to bestow upon them even more importance. This is my moment of reaching, but sharks have a thirst for "bad blood" and if that dancing shark happens to be the cause of a feud, it has to mean something, right? Don't let their cuteness fool you...