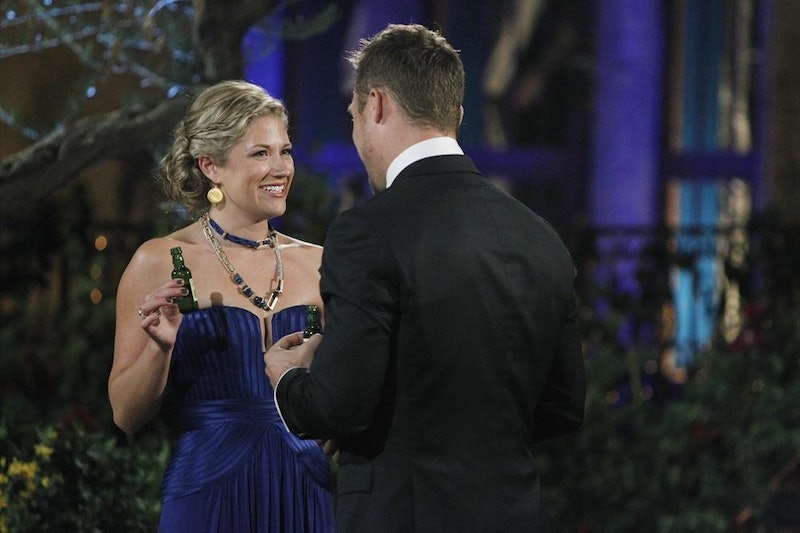 Everyone's favorite whiskey-loving bachelorette is back! No not Tara, but Jordan Branch who Chris Soules sent home in Episode 2. The Bachelor is in Santa Fe this week and Jordan makes a surprise appearance. No, she doesn’t live there; she drove all the way down from Colorado to meet up with Chris. But as we saw, that road trip didn't exactly work out so well for her. I think I speak for everyone when I saw I really hope this girl found happiness after this episode. Update: Jordan has confirmed to Bustle that she is currently in a relationship!

First of all, While I love The Bachelor, I'm a firm believer that most women who look bad on the Bachelor are victims of editing. I hope that Jordan showing up in a different state for Chris has to be something that the producers asked her to do. We all predicted that Chris might be kind of a boring bachelor this season, so for two girls who didn’t receive roses to both come back, seems a little iffy. I just want to give Jordan the benefit of the doubt here! I'd bet anything that the producers asked her to make an appearance to stir up some drama.

That being said, when the show started, Jordan was a 24-year-old student from Windsor, CO. Her limo exit with the shots was pretty solid, but after she was booted, she told TMZ that the producers fueled the drinking and manipulated contestants by offering non-stop drinks. She later tweeted that the gossip site twisted her words and she takes responsibility of her actions. Regardless of what happened in the house, I'm pretty sure we all want to know where Jordan is now.

She hasn't moved to Hollywood to begin an acting career. According to Twitter she is still enjoying the mile high city.

But Also Parties in LA

At the end of October, right around the time they were filming the show, she was hanging out with her friends in West Hollywood and Santa Monica for a little bit. Probably right after she left the mansion.

OK, deactivating your Facebook is like quitting smoking. So I consider this to be a milestone for Jordan since the show ended.

No word on whether she’s found love since the show ended, but here is an Instagram pic from her page from two weeks ago… I mean, I hope they aren’t related or just friends because she should really start dating this guy.

On The Job Hunt

Like most recent grads she is currently on the job hunt. She posted a picture last week of her on her computer (with her dog nearby) as she applied for jobs. According to her LinkedIn, she was an executive assistant up until she became a contestant on The Bachelor. Now that it’s over, she’s back on the hunt. Welcome to the real world, Jordan, you’re going to hate it!