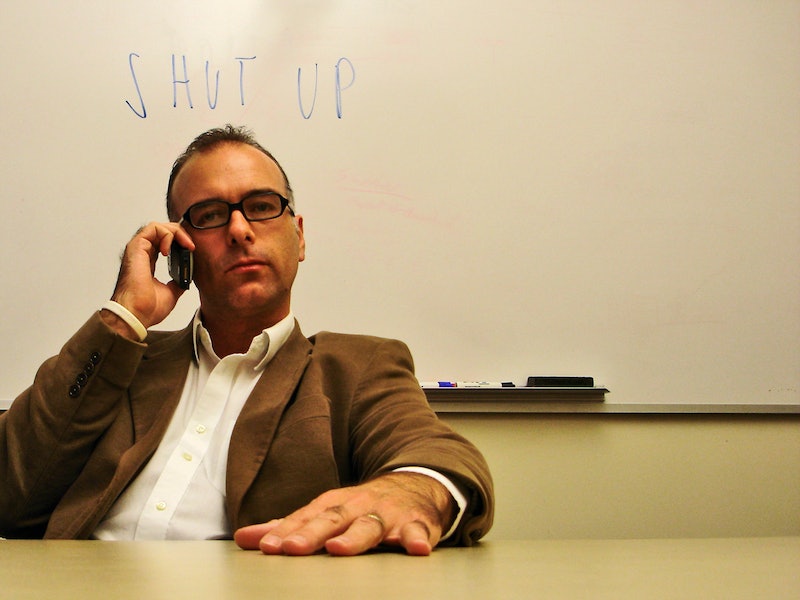 We all know someone who's annoying (hopefully it's not you). While you might have previously decided someone was annoying because they just suck, that's probably not the case, and actually scientists have pinpointed why people are annoying. Which is good news, because if you find yourself worrying that you're getting on people's nerves, now you'll know which behaviors to modify. And if you know someone who grinds your gears (in a non-sexual way), maybe send them this article? Just sayin'.

A study conducted by Irene Scopelliti and colleagues of the City University of London set out to tackle one type of annoying person: the self-promoter. You know this person. He or she is always bragging about their latest accomplishment (or worse, they humble-brag), and no matter what your conversation is about, they always seem to bring it back to themselves. Ugh. I feel like unless you're a sociopath, you know this behavior is irksome at best, so why do people still do it?

The reason, in part, is because bragging makes us feel good. In fact, a 2012 study found that talking about ourselves triggers the same feelings of pleasure in the brain that we get from food or money. As for why we brag even though we know it can have undesirable social consequences, Scopelliti says it has to do with our inability to put ourselves in other people's shoes, otherwise known as emotional perspective taking. Basically, emotional perspective taking is predicting how others will respond to your situation and adjusting your actions accordingly. Emotional perspective taking is an important part of social interaction, and quite frankly, we suck at it. And the reason we annoy people with our bragging is because something cool happens to us, and we think that since we're so happy, that naturally our friends will share our excitement. But they don't, and then we just come off as Humphrey Braggarts (haha, wasn't that funny?).

Here's how they tested their hypothesis: researchers asked one-half of the study participants to describe a time they bragged to someone about something, in detail, in addition to the emotions they felt and the emotions they believe the other person felt. Meanwhile, the other half of subjects did the opposite, describing a time someone had bragged to them and how they felt about it.

The results found that "self-promoters" (the scientific term for Humprey Braggarts) reported more positive emotions and were more likely to project those positive emotions on the recipients of their boasting. Also, on the flip side of the same coin, self-promoters were less likely to report or project negative emotions. In other words, it did not occur to them that other people might not want to hear them brag.

More specifically, in a follow-up experiment they found that self-promoters overestimate how proud and happy others will be for them, and way underestimate how annoying they'll come off. So, how do you stop yourself from being annoying, and does this mean you can never share your accomplishments ever with your friends?

I personally don't think you should refrain from ever telling people your good news, because after all that's what friends are for. If you're, for instance, getting married, by all means, tell your friends! But if you feel the need to send out a mass email newsletter every time you get an Instagram like, you should really reconsider how much you share.

As for social gatherings, there's an easy way to keep the conversation flowing without sitting in silence or being grating, and you've probably been doing it all along. Researchers from Harvard found that when people socialize, those who had the same experiences (no matter how boring or ordinary) enjoyed chatting the most. So focus on what you and your friends have in common and you should be good. And if all else fails, it's OK to be annoying sometimes.