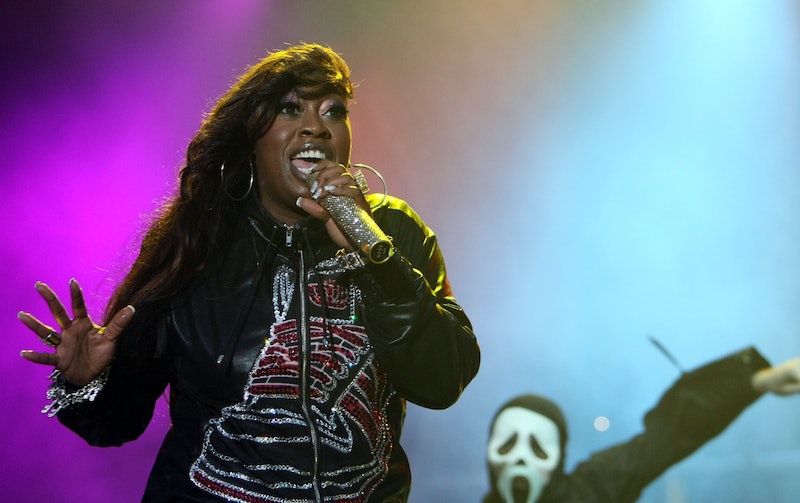 So, how does one come down from such a spectacular, face-melting performance? By watching Missy Elliott videos on YouTube, that’s how. But I didn't stop at watching the vids. On this fine post-Super Bowl Monday afternoon, I decided to dig into one of Missy’s greatest music videos. And that would be the "Lose Control"/"On And On" video.

The Dave Meyers-directed vid made its TV debut in 2005 and features appearances from Ciara, Fatman Scoop, and Tommy Lee. Ciara and Fatman Scoop appear on the track, so their being in the video totally makes sense. Tommy Lee, however? Not on the song. But hey, no complaints here. His cameo is aces. This entire video is aces.

Every time I hear this song or watch the music video, my body moves involuntarily. I can't help it. I just... lose control. Here are the moments from the music video that make me — do I even need to say it?

When the dancing commences

When Missy magically rises up out of the sand

When Missy kicks a bunch of sand in the air because why not?

When Missy works it out

WHEN THIS YORKIE SHOWS UP

When this dancer makes this face

When Missy shows off her amazing sleeves

When Ciara and this dancer bump crotches

When the tempo slows down but the dancing doesn't stop

When someone pops out of a smoke-filled trashcan

When that someone is Tommy Lee

When Missy continues to defy physics

When Tommy Lee and Missy show off their magic skills

If there was a Grammy for Song/Music Video That Always Puts Kristie Rohwedder In A Great Mood, "Lose Control" would win every year. What a masterpiece.