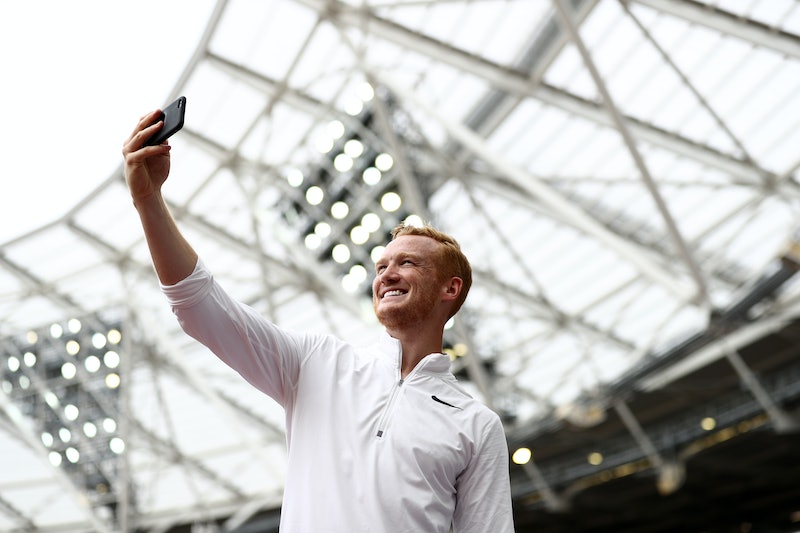 Ah, the venerable art of the selfie — simply reach your arm out, pucker, click, and voilà, a masterpiece to share with your friends. As selfies have become increasingly popular, more studies are being done to understand the phenomena, and a recent survey of British men had surprising results — It found that men take twice as many selfies as women (the men surveyed, at least).

The survey polled 2,000 British men and women, ages 18 to 30, asking about the participants’ selfie-taking habits. On average, people in this age group take 100 selfies a year, which means that they pose for their smartphone cameras about once every three to four days. The survey’s most surprising finding was that men are twice as likely to take a selfie as their female counterparts, snapping an image of themselves three times a week. Women, on the other hand, only indulged in a digital self-portrait an average of 1.6 times a week. Men are also more vain when it comes to showing skin — three quarters of men said that they feature their bodies in selfies compared to less than half of women.

The motivation behind taking a selfie also differs by gender. According to the survey, men are most likely to turn around their camera when they want to attract women, though a quarter of the men said that they snap a photo in order to make a current or ex lover jealous. Most women have other intentions, with 35 percent of participants revealing that they take selfies to share what they are doing with friends, and 26 percent claiming that they aim to record memories. Still, 13 percent of female participants take selfies to make partners jealous, and seven percent use these pictures to attract men. What both men and women have in common though is that a fifth of all participants admitted to using selfies to show off.

If all of this is true, then the Brits might have a reason to worry. According to a recent study, men who take selfies are more likely to exhibit psychopathic and narcissistic tendencies than men who resist the urge to make a duck face. However, this survey on the gender divide between selfie-takers was funded and conducted by smartphone maker HTC, a company that recently released a phone with a special feature just for selfies. This means that HTC has a vested interest in their survey having a newsworthy edge. And, if my Instagram account has taught me anything, it’s that I need to brunch more and my girlfriends take way more selfies, and pictures in general, than my male friends.

So do men really take more selfies than women? I wouldn’t make that call just yet, but from now on I’ll keep an eye out for which of my male friends post selfies, and try and guess what their intention actually was.