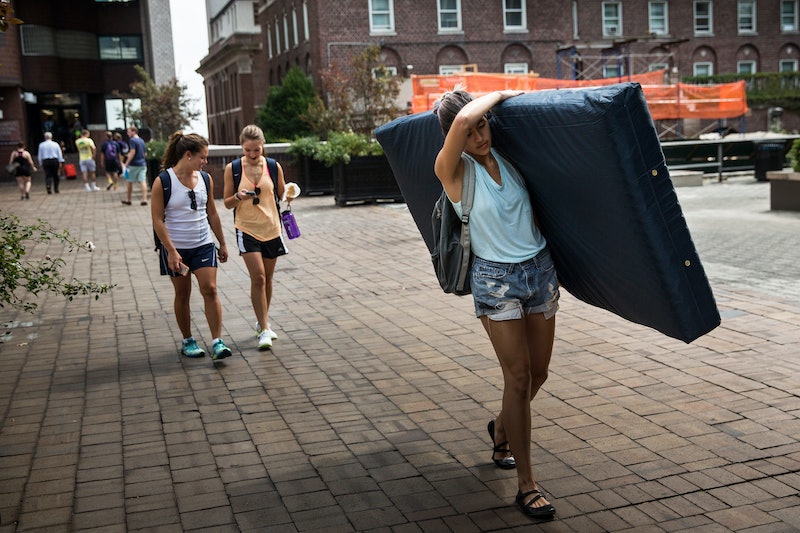 Right now, we're talking more about rape and sexual assault possibly than we ever have before, and it's obviously a conversation we need to be having. We also, however, need to be talking about recovery after sexual assault — but for some reason, we're not. Why? Tracy Clark-Flory makes an effort to break down this taboo in her piece for Refinery29, “What Sex After Sexual Assault Is Really Like”; it introduces an important element to the ongoing conversation about rape and sexual assault, and honestly, it should be required reading for everyone. We're still fighting an uphill battle with regards to things like legal definitions of consent — but it's also important to remember that our work isn't done when that whole part of the conversation has finally been satisfactorily addressed.

One of the things that makes talking about recovery so difficult is that, as Clark-Flory put it, “There are as many different symptoms and coping strategies as there are survivors.” In order to demystify it, though, Clark-Flory spoke both to individual survivors and to Wendy Maltz, a sex therapist and author of the book The Sexual Healing Journey: A Guide for Survivors of Sexual Abuse. Here's kind of the Cliff Notes version of what I think are the most important takeaways; the whole piece is definitely worth reading, though, so head on over there to check it out.

Columbia University student Emma Sulkowicz, who is carrying the dorm mattress she was raped on wherever she goes while her rapist still attends the school.

Just a week after her assault, Donna wanted to have sex with her boyfriend in an effort to reclaim it — “It's important for me that rape and sex are not the same thing,” she said to him at the time. She doesn't remember having sex with him then, though, and now she says she knows it was too soon. As she worked through what had happened to her over the following weeks, sex with her boyfriend got less traumatic; she learned how to communicate clearly, to set boundaries, and to explain both what she needed and what was OK. Donna and that boyfriend eventually broke up — but afterwards, she met the man who would become her husband. “He's very passive,” she said, both personality-wise and sexually. “He's not a dominant force and, for me, that was something I needed. I needed to feel safe.”

The University of Virginia, topic of much conversation after the Rolling Stone story "A Rape on Campus."

Maltz employes a number of strategies for helping survivors work through what happened to them. One of therapy's failings right now is that so many of these strategies remain focused on dealing with feelings; said Maltz, “That's important, but it's not the whole story.” For example, she told Clark-Flory that it's common for survivors to need to “relearn touch”: “The sexual abuse takes place on a physical plane, so it has a lot of physical associations. You have to create a new file with associations to touch,” she said. This “file” might begin with something like drawing messages with a finger on a partner's back — something non-sexual, but intimate — before moving onto sex itself.

Like I said, we still have a long way to go before we'll have reached the end of one road — and there's still plenty more ground to cover after that. But if we keep the conversation going, I have hope that we'll get there eventually. The fact that we're talking about it can only be a good thing.

Head on over to Refinery29 to read the whole piece — and if you or someone you know is recovering from rape or sexual assault, see RAINN's website for a list of recovery resources that might aid in recovery.

More like this
The Strange, Sad, & Hilarious History Of Online Dating
By Samantha Cole
Emily Ratajkowski & Pete Davidson's Astrological Compatibility, Revealed
By Nina Kahn
Are Sagittarius & Capricorn Compatible In A Relationship? Astrologers Weigh In
By Kristine Fellizar
20 Thanksgiving Toast & Speech Ideas That Actually Aren’t Cheesy
By Brandi Neal and Mia Mercado
Get Even More From Bustle — Sign Up For The Newsletter