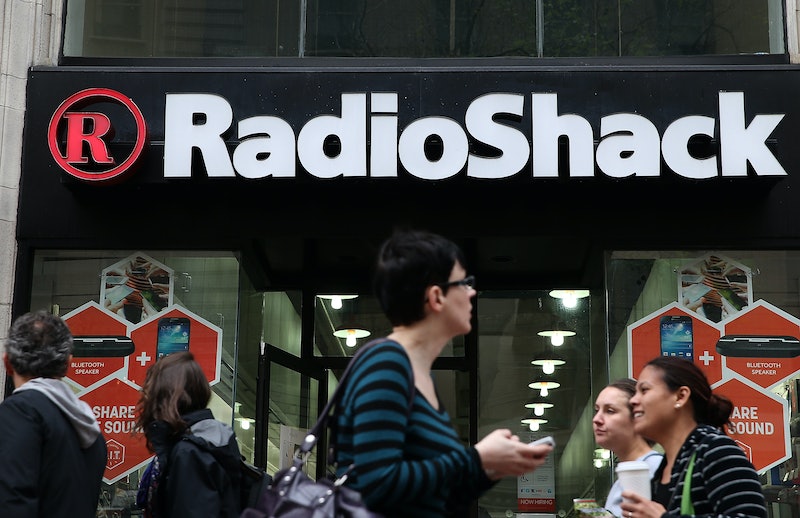 RadioShack used to be the electronic store in its hey-day, but in more recent years, the company has had a difficult time keeping up with competitors, which is probably why RadioShack is rumored to be in private talks to sell some RadioShack stores to Sprint and close the remaining ones. RadioShack was one of my dad's favorite electronic stores to visit, in line with bigger stores such as Fry's and Best Buy. But even with those bigger chains, RadioShack did well for itself until the competition from large stores such as Walmart and online electronic sellers such as Amazon. According to Bloomberg, RadioShack has reported unprofitable quarters for the past 11 quarters, and past attempts by the CEO to turn the decline around haven't worked out.

The talks between RadioShack and Sprint aren't public yet, and Bloomberg’s sources wish to remain anonymous, but the primary plan seems to be to convert the stores bought by Sprint into Sprint stores, which will mean the end of RadioShack. However, things could be different if a deal isn’t reached in the end or if the retailers decide to pursue the option of co-branding the stores, an option Bloomberg’s sources say has also been discussed. So there's still a chance that RadioShack might make it through these talks, but I think it's best to prepare yourself to say goodbye.

When RadioShack was popular, I wasn’t old enough to buy electronics for myself, and by the time I was, I was already attached to Amazon, so I haven't been inside a RadioShack in a long time. But thinking of RadioShack brings back a little bit of nostalgia for the simpler days of youth and only a few options for electronic gadgets. Here's what I'll miss about RadioShack if (when?) it closes.

Getting Dragged To The Store With My Dad

Shopping trips with my dad were always different from shopping trips with my mom, mostly because they usually involved stops at RadioShack. The store was a go-to place for whatever my dad needed around the house, whether it be a new remote or an mp3 player (remember those?). Now I just go grocery shopping by myself, which is slightly less entertaining than going with my parents.

Trying Out The Remote Control Toys

I’m sure other stores let you test out their remote-control cars, but for me, RadioShack was always the place to go for that. I never tried to get one for myself, since they didn't interest me that much, but it was always fun to test-drive a few while I was there. I'm just assuming that the kids of today have moved on to their own personal drones now. That's what kids are playing with now, right?

Did anybody else get excited about picking out their landline phones, or is that just me? I remember how jealous I was when my sister returned from a trip to RadioShack bragging about how she'd helped pick out our latest set of landline phones. But maybe that’s showing just how old my memories of RadioShack are, because who still has home phones at this point? Clearly, this was before I got my first cell phone and eventually stopped even answering the landline, let alone obsessing over what the new phone would look like.

The Selection Of Radios and Boomboxes

And of course, what would RadioShack be without its radios? When I got my first (and only) radio, it was a moment of feeling like I had arrived. Where? Who knows. But I could spend hours listening to the radio and waiting for that one song to play on the radio, so I could record it on tape and play it whenever I wanted. Those were the days.

Obviously the things that made RadioShack a fond place for me are a bit dated in their relevance (except trips with my dad, of course), which I think says a bit about how the store has fared in the present-day. Whatever the outcome of RadioShack's talks with Sprint might be, it'll always live on in my memories.