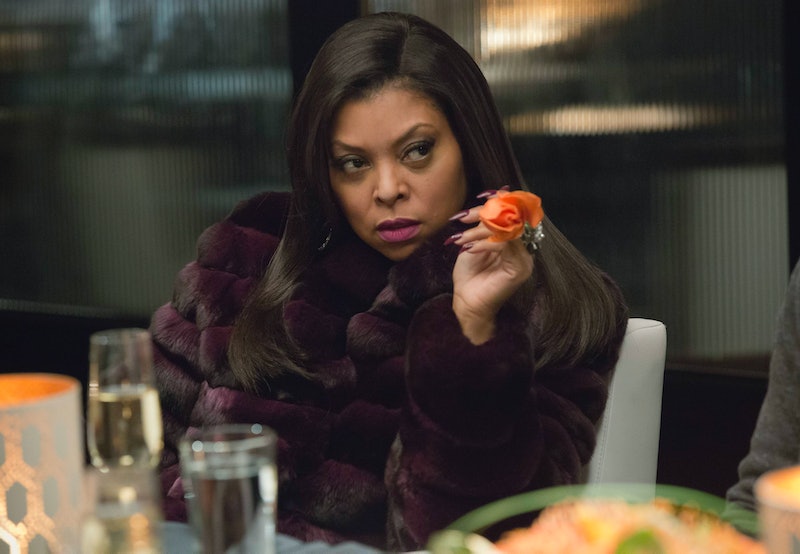 You think the constant scheming, feuding, and backstabbing that goes on in FOX's Empire is crazy? Then you don't know Shakespeare. Though the Bard is famous for his iambic pentameter and star-crossed lovers, he was equally fond of killing off his characters with unabashed glee in the most gruesome ways possible. There's Titus Andronicus, where the title character's daughter is raped by his enemy's two sons, who then proceed to cut off her hands and tongue so she cannot name her attackers. She eventually manages it by holding a stick in her mouth and scratching their names in the dirt, and Titus retaliates by baking the two young men into a pie and feeding them to their mother. There's Richard III, where the title character has his own brother brutally stabbed by two henchmen and then drowned in a barrel of wine. And there's King Lear, where the title character's conniving daughter gouges out an old man's eyeballs. Empire is ostensibly based on King Lear, which tells the story of an aging patriarch who must determine out how to fairly divide his kingdom between his three children.

There are differences, of course, and the show owes just as much to The Lion In Winter as it does King Lear. But since FOX's hip hop drama is inspired by one of the Bard's most famous tragedies, I figured — Why not go all the way and imagine what Empire would look like if Shakespeare had actually written it himself?

What follows is the story of Lucious Lyon and his three sons, a TV show presented in five acts.

The first act would consist of everything we learned in the first couple of episodes — Lucious Lyon, the (king) CEO of Empire Entertainment is dying, so he tells his three sons that they will have to fight to inherit his (kindgom) company. There's the eldest: ambitious businessman Andre; the middle child: gay black sheep Jamal; and the youngest: spoiled and brash Hakeem. Scene 1 ends with Lucious (slaying) shooting his (trusted advisor) childhood friend Bunkie.

In which we meet Lucious's former (queen) wife, freshly released from (the dungeon) jail, where she had been imprisoned for 17 years. She returns to (the kingdom) Empire to reclaim her (throne) portion of the company.

At the end of the first act, the entire cast converges at Bunkie's funeral, and all of the varying alliances are made clear: Lucious and his (paramour) girlfriend Anika, who both favor Hakeem; Cookie, who supports her favorite son, Jamal; and Andre and his Lady Macbeth-ian wife, Rhonda, who plot to steal the (throne) company from everyone else.

In her quest to supplant the Lucious/Anika/Hakeem triumvirate, Cookie seeks out her former lover and ally, Puma. The sparks quickly fly and he presents her with a secret weapon to aid in her mission: a song so beautiful it weaves a magic spell around anyone who listens to it.

Meanwhile, at a (ball) club called Leviticus, Hakeem meets a beautiful young woman named Tiana. However, they quickly learn that they hail from rival (factions) managers: Hakeem is managed by Lucious, and Tiana by Cookie. They agree to keep their affair (a secret) on the DL.

Cookie confronts Lucious with her magical song. Her plans backfires when Lucious overpowers her, steals the song from her, and claims ownership over its magic. Cookie returns to Puma in disgrace, but her lover vows to craft her a new song even more powerful than the first.

While attending a (masquerade) gay Halloween costume party, Jamal spies someone wearing a familiar mask. Thinking it to be his boyfriend Michael, he reveals to the man everything Hakeem just told him, including his affair with Camilla. However, this turns out to be a case of mistaken identity — when Jamal leaves to get a drink, the masked man reveals himself to be not Michael, but Tiana's cousin, rapper Ty Bolt. He vows revenge on Hakeem for tainting the honor of his beloved cousin.

Lucious goes with Anika to the (apothecary) doctor to appeal for (a potion) medicine for his affliction. They return to their (castle) fancy loft in despair, where Jamal overhears them discussing how Lucious' disease is traveling more quickly than anticipated.

Ty Bolt seeks out Hakeem and (challenges him to a duel) engages in street warfare. In the ensuing shootout, Ty Bolt ends up dead and Hakeem is forced (into exile) to go on the run from the law.

Andre's conniving wife Rhonda, who has gotten wind of Puma's plans to aid Cookie, lures him to her home, where she sics her two toy poodles on him; they gouge out his eyes, leaving him blind and helpless. Kindhearted (maiden) assistant Becky enters and, seeing the carnage, kills one of the poodles in an effort to save Puma. Rhonda kills Becky in retaliation.

With Puma out of the picture, Cookie's plans are effectively ruined. All that's needed for Andre to win the (kingdom) company is to oust his own father... which he does by revealing Lucious' hidden illness to the (court) board of executives. Lucious flees in disgrace to the (wilderness) streets where he grew up; Anika is (banished) voted off the board for her role in Lucious' cover-up. Andre becomes (king) CEO of Empire.

Her efforts to install Jamal as (king) CEO thwarted, Cookie retaliates against Rhonda by baking her remaining poodle, Spot, into a (pie) casserole and serving it to the evil woman. When the truth of what she has eaten is revealed to Rhonda, she begins to spiral into madness, repeatedly rinsing her mouth and muttering "Out, out, damn Spot!"

Hakeem resurfaces, having realized the depth of his love for Tiana and unable to be parted from her any longer. When Ty Bolt's gang, the Capulets, get wind of Hakeem's return, they seek him out and, just as Hakeem and Tiana are pledging their love, they (execute him) gun him down. Lucious, disguised by rags and filth, witnesses his son's murder. Tiana, overcome with grief, (drinks too much) overdoses on (a potion) drugs she had previously procured.

Andre's first (court session) board meeting as (king) CEO is interrupted by the arrival of his bearded and bedraggled father, carrying the body of his youngest child. Lucious lays Hakeem's body on the floor of his (throne room) boardroom, bemoans all that has led him to this horrible tragedy, and perishes from old age, illness, and grief. Just then, Andre receives word that a crazed Rhonda has thrown herself from the (highest tower) roof, and, in shock, he abdicates (the throne) his position. Jamal, with Cookie and Michael by his side, claims (the crown) Empire for himself, which he vows to rule in peace in honor of his fallen father and brother.