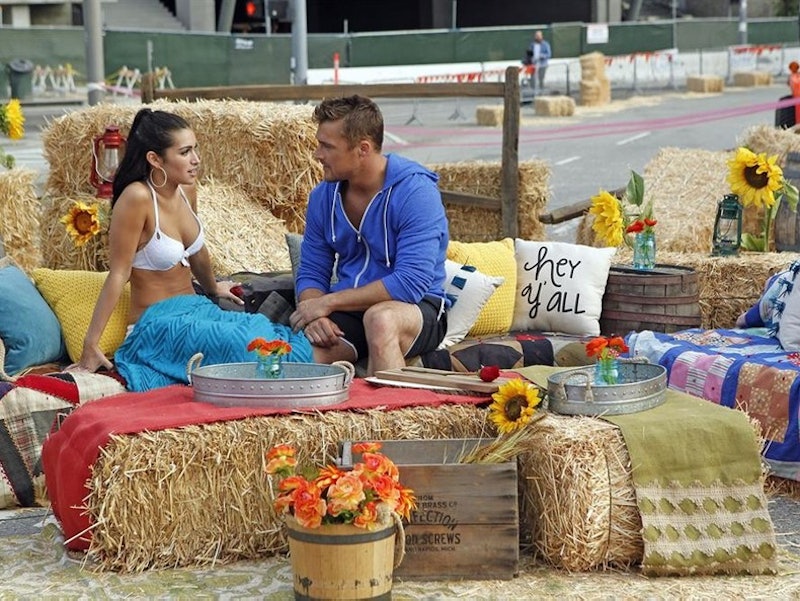 Turns out one villain wasn't enough for Chris Soules' season, because in addition to Kelsey being a total bummer, Ashley I. is turning out to be really mean on The Bachelor. I should have suspected that she was a Regina George in sheep's clothing after her antics last week. She was skipped over for the Cinderella-themed date and would not let it go.

While Jade was whisked off for her princess date, Ashley skulked around the house in a gown that she had apparently brought specifically for such an occasion. She moaned endlessly that it should have been her getting pampered instead because she is a "princess," and it was pretty annoying to watch.

But this week Ashley kicked things up a notch and went totally Mean Girls on the house. I'm talking full-on Regina George, talking behind everyone's backs and just generally being super rude. When Jordan came back for a second chance Ashley straight-up said, "We should not be nice to her right now." Like, I get that she was frustrated at the chance the competition could grow, but that doesn't mean she had to be a jerk to Jordan. The rest of the women looked uncomfortable when Ashley said that, but she didn't back down.

"I feel like you're being too understanding. She blew her chance. I don't understand why you girls would be welcoming to her," she elaborated, digging her mean girl hole even deeper. "You have to think of yourself as number one."

Then Ashley spent a lot of time talking about how Jordan was a party girl, and how she was so much better than her. But even when Chris sent Jordan home, Ashley simply turned her attention to a new target. This time she was mad at Whitney for securing the group date rose. "I really thought I didn't have to worry about that," she spit out after Whitney won. "I think she's fake as s---t."

Well Ashley, I think you're being pretty rude and like Whitney said, "Chris does not want a mean girl for a wife." So if Ashley wants to stay in the game, she better take things down a notch. Making enemies of all the women in the house is never a good strategy for long-term success, and right now based on her behavior Ashley has one foot out the door.