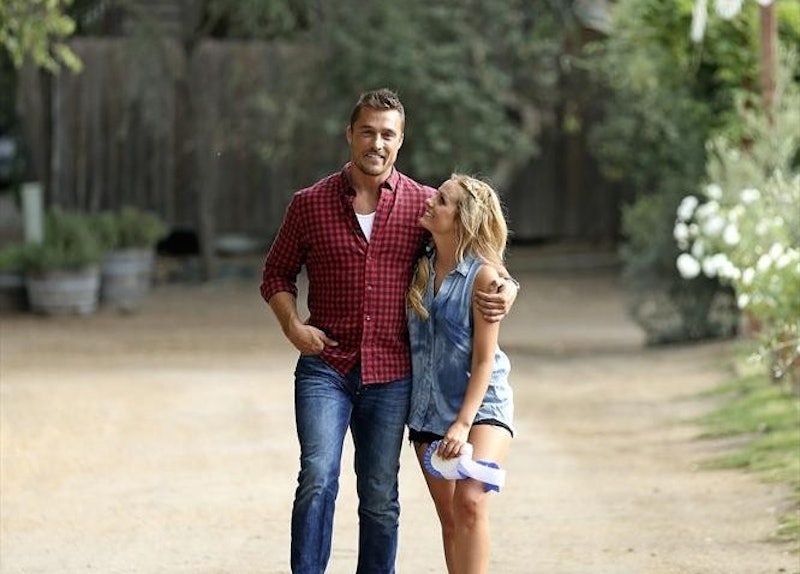 What happens when a love guru becomes a sex guru? That's what Chris Soules and Carly Waddell discovered this week during their date which rapidly turned into one of the most awkward displays of PDA I've ever seen on television. The Bachelor sent Chris and Carly to a love guru, who ended up coaching them more on touching than on expressing their feelings. The best part about it was that the couple was equally as weirded out as viewers no doubt were.

"This made me emotionally and physically uncomfortable," Carly confessed in her interview after the date. "It was like date seven instead of date one." I don't blame her for feeling awkward. The love guru had her doing some pretty strange things to Chris.

Poor Carly had to blindfold him and then slowly rake her fingers up his body. Then she had to smear strawberries on his lips and take off all his clothes. Fortunately for everyone Chris stopped her as she nervously moved to undo his pants. But the ridiculousness didn't stop there. No, then the pair had to get about an inch away from each other and just breathe onto each other's faces. (Here's hoping no one had bad breath.)

It was maybe the worst 15 minutes of television I've ever seen. I was getting second-hand embarrassment just watching it happen. It felt like a weird Fifty Shades of Grey marketing ploy or something. (Hey, they did Cinderella last week. It could happen.)

But not only was it super awkward, it was also pretty unnecessarily sexual. Chris had to climb through her legs, and she had to rub him like she'd "never touched a body before." I mean the date card said "Let's come together" for goodness sakes. It doesn't take a lot of imagination to see the overt sexual symbolism there.

I don't know what The Bachelor thinks it's up to, but it's only Week 5. Maybe they should save the awkward sexual talk for the Fantasy Suite. Or, like, never. I don't ever want to have to watch something like that love guru date again, even if it did bring Chris and Carly closer.