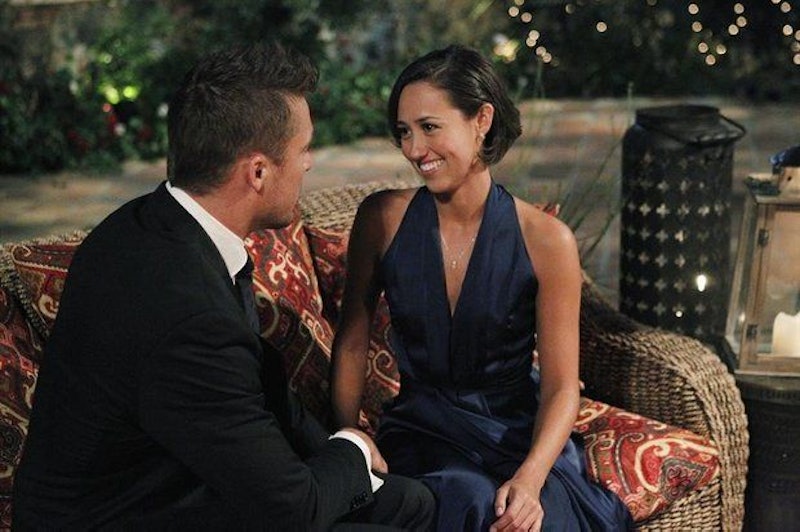 It's not an episode of The Bachelor if someone doesn't end up sobbing on the floor at some point. This week it was Kelsey Poe who had a breakdown on The Bachelor and had to be tended to by paramedics. The dramatic moment was saved for the final minutes of the episode, which then left us hanging with a dramatic "to be continued" message. But what exactly happened to Kelsey?

By her own admission, it seems like she had a panic attack of some sort. She went from feeling totally secure in her relationship with Chris, to feeling scared she was going home and that seemed to have triggered an onslaught of anxiety.

She had a rough episode in general, as she finally told Chris about her deceased husband. But while she originally thought she was safe, Chris ominously told the group that his chat with her really made him rethink things. He probably just meant that he was reminded life is short and his decisions on this show are important, but Kelsey took it as a bad thing — and that didn't end well for her. She ended the episode laying on the hallway floor sobbing and gasping for breath and medics shouted that they might have to call 911.

Did she actually have to go to the hospital? Or was it just a moment of passing panic? We won't find out until next episode. She seems to be in good health today according to her Twitter. But who knows what happened between her panic attack and today? Could things get even more dramatic during the next episode? We'll have to tune Monday in to find out the next chapter of Kelsey's story.