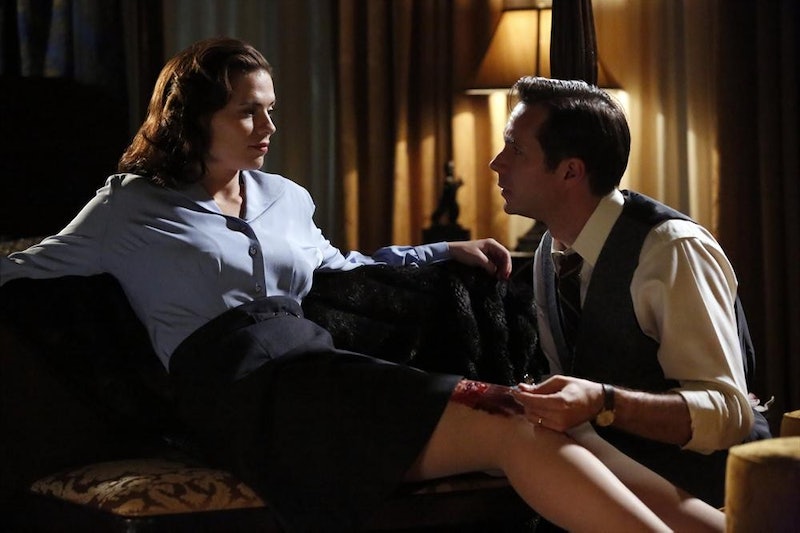 It's no secret that Hayley Atwell was made for the role of Peggy Carter. Nor is the fact that she's inspiring women along the way as the hero of the Marvel series. I think it's safe to assume that everyone who watches Agent Carter feels all kinds of woman power every Tuesday, in the best way possible. Not only does Peggy take on sexism in the workplace, but she also deals with it in essentially every other aspect of her life, since it wasn't exactly a rare occurrence in 1946. In an interview with Bustle, Agent Carter star James D'Arcy, who plays Jarvis, shares some interesting thoughts about the female-driven show he's lucky enough to be a part of.

"I think that everything about this show is brilliantly written," D'Arcy says. "Obviously, it’s a Marvel show. It’s an action-adventure show, but it’s written very entertainingly. It’s very funny…and we have, this is what I think is very clever about it, the show is set in 1946, so one of the things it’s going to deal with is…it’s difficult to even call it sexism in the workplace, because it didn’t even exist."

Of course, sexism did exist during Peggy's time, it just was never acknowledged. Back in the '40s, women were expected to get married, have children, and run the house, while men "put on the pants" and went to work. That was the societal norm. Of course, World War II and other aspects of history changed that, which we've seen remnants of throughout Agent Carter. The show also points out that during that time period, specifically through Peggy, women were beginning to explore the options outside of those enforced gender roles by not getting married or having kids just because society said so, and working in jobs outside the home, like an SSR agent, that weren't considered female-friendly.

This is something D'Arcy also mentions about Agent Carter's setting, saying, "Women were just considered to be secretaries. It wasn’t a question of sexism, that’s the prevailing attitude. So no one even thought to event the idea of sexism. But, our response to that in 2015 is to make a show in which a woman is front and center…which I think is a brilliant answer to the question that hasn’t even really been [formed] in 1946."

As we watch Agent Carter in 2015, we see a ton of sexism, all while rooting for Peggy and every feminist moment portrayed, which is something that, unfortunately, didn't die off in 1946. We're still dealing with it in 2015. Thankfully, we have shows like Agent Carter, characters like Peggy, and actors like Atwell who are transforming TV and addressing gender inequality one episode at a time.