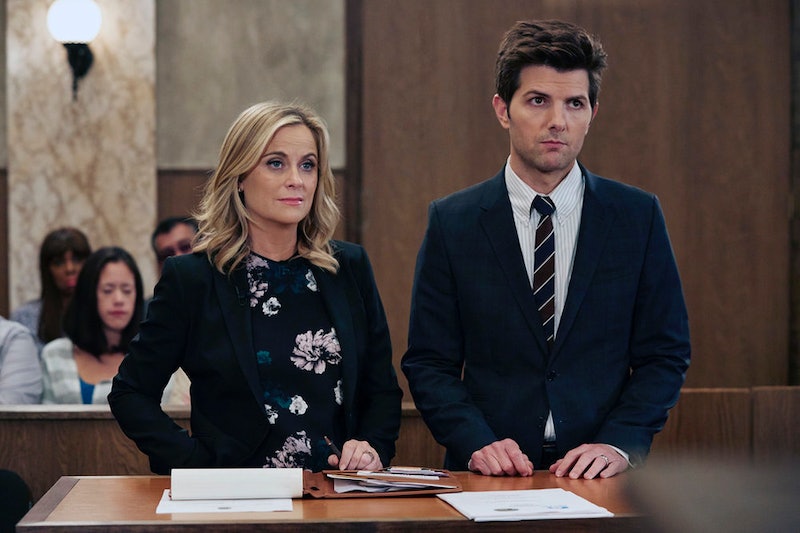 There were a lot of wonderful surprises found throughout the time-jump in Parks and Recreation's Season 6 finale (I'm looking at you, Jon Hamm), however, one of the most pivotal change ups that occurred was the presence of Leslie Knope and Ben Wyatt's adorable triplets on Parks And Rec. I gotta admit, I didn't see that twist coming, but if any couple is capable of handling such a big handful of triple-threat energy it's this Pawnee power couple. Made up of two sons and one daughter (who still all remain nameless to us, by the way), it's kind of sad to think that the series won't be around to show fans what exactly will become of these Knope-Wyatt offspring. Which is why I took it upon myself to make a few predictions myself!

Between Ben's calzone creations and Leslie's waffle intake, I'm betting that this particular household is no stranger to delicious food. In other words, this is the perfect atmosphere to help hone (or should I say season) a sophisticated palate. (JJ's waffles are a delicacy, after all.) Mark my words, folks — a culinary arts school is in this boy's future. I'm sure of it.

Son (Without Glasses): An Astronaut

I think we can all agree that both Ben and Leslie are super productive people with great ambition. Some might even say they tend to reach for the stars, so why not have one of their children take that goal to a very literal level? I mean, think about it. Leslie is fearless in everything that she does and Ben craves adventure — a fact that gets proven time and time again thanks to his undying love of superheroes, Lord of the Rings, and Star Wars. And what greater adventure is there than blasting off to parts unknown? Perhaps even to a galaxy far, far away.

Daughter: The President of the United States

You had to see this one coming, right? Someone has to inherit Leslie's fierce political drive and strong feministic nature, which would prove to be an unstoppable force in the D.C. arena. Just think of all the wonderful lessons and words of wisdom Leslie could impart on her young daughter. Laws would be fair and just; waffles would be free for all; Galentine's Day would become a national holiday; and feminism would be at an all-time high. (Ovaries before brovaries, baby!) All-in-all that sounds like a pretty great country to be apart of. Can I place my vote for her now?

But whatever these three would end up doing with their lives, rest assured they, like their parents, would be guaranteed to make their mark on the world… as well as our hearts. We love you and we like you.