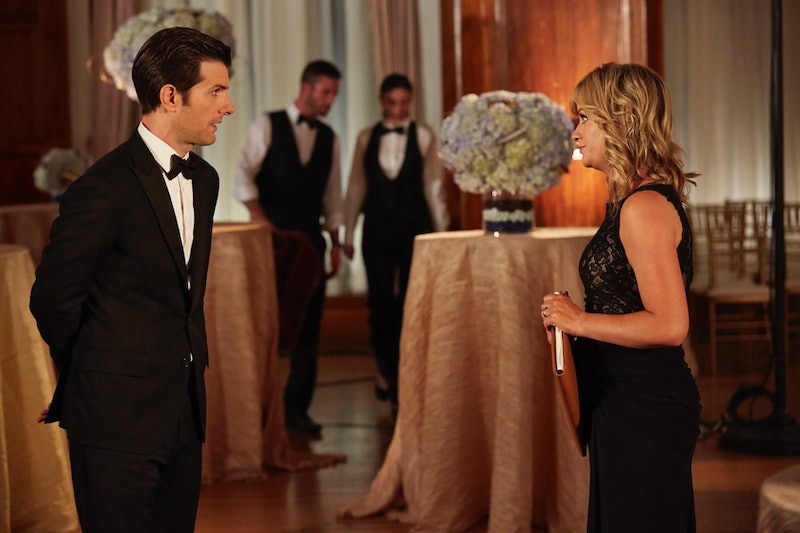 The time-jump in the Season 6 season finale of Parks and Recreation gave us a glimpse into the future of Leslie Knope and Ben Wyatt — including a look at their toddler triplets. So we officially know that the cutest couple in Pawnee (if not in the world) has two sons and one daughter‚ but what could Leslie and Ben's triplets' names be? The final season of Parks and Rec premieres on Tuesday, Jan. 13 at 8 p.m. and I anticipate that we'll find out in the first two episodes (since NBC is airing two episodes a night), but let's pull a Leslie Knope and make some guesses first.

Of course, in real life, people don't choose baby names solely on their likes and dislikes (although I honestly want to name all of my children after characters in books). But both Leslie and Ben are passionate people (which is a nice way to call them obsessive — *cough* Leslie), and I wouldn't put it past them to name their children after their favorite things. It's the final season of the beloved TV show, so why not get in as many jokes as they possibly can before saying goodbye? (I'm tearing up at just the thought of it.)

(Real-talk time, Leslie and Ben: Just please, please don't name your children after your favorite foods. Waffle and Calzone would endure way too much teasing at school.)

Although the triplet story line was divisive for fans, the triplets are here for Season 7 and they're sure to be adorable. So here are some theories on what the triplets' names could be. (I both pray they do and don't name their children the following names.)

Li'l Sebastian, the iconic miniature horse of Pawnee, died in the Season 3 finale, but his spirit lives on. If this was Ben and Leslie's only son, I don't think Ben would go for the name. But since they have two boys, he may be willing to give into Leslie on this one. Plus, Sebastian Wyatt (or most likely, Sebastian Knope-Wyatt) sounds pretty swanky. Even though Ben may still not understand the whole fuss about Li'l Sebastian, he's always been supportive of Leslie.

As for the middle name, if the kid is going to have an epic first name, he needs an epic middle name too. And nothing is more epic than the board game that Ben created during his second round of unemployment — the Cones of Dunshire.

Not only is it something that Ben solely created, I suspect that Ben and Leslie will have earned some significant profits from the game over the last three years. So they may want to pay homage to it. My guess is their son with the most precious little glasses in the whole world will have this nerdy, (yet somehow) sophisticated name.

(Please note: This son will not be #2 in Ben and Leslie's hearts — they'll love all of their children equally. It's just a way to distinguish between the boys, so I'm not trying to give this fictional child a complex or anything.)

There is a lot more to Ben Wyatt than just being a nerd – but nerdy entertainment is his jam (Ghost Jammed!), just like Leslie's love of Pawnee, women in politics, Ann Perkins, and organizing elaborate events are her jams. When Ben joined Donna and Tom on their Treat Yo' Self day, he proved that when given the chance to splurge on himself, he turns to the caped crusader. He purchased an outrageously elaborate Batman costume, so why not name his son after the dark knight's alter ego, Bruce Wayne? Wayne Wyatt has some nice alliteration too.

The middle name of J.J. is inspired by Leslie's favorite restaurant — J.J.'s Diner. And the name is symbolic to both Leslie and Ben since J.J. catered their wedding. Now if we want to get real deep with the in-jokes, each initial could stand for another name — Joseph and Jerry. Joseph for Leslie's number one crush Joe Biden (if it didn't intimidate Ben).

And Jerry for their bumbling coworker that Ben has a soft spot for. Just kidding on that whole Jerry thing though (although considering it's not really his name, that would add to the hilarity). If Leslie was going to name her child after any coworker, it would be Ron Swanson. So, Jerry/Larry/Terry — get out of their kid's name!

This was a tough one. With only one daughter — and so many women role models — Leslie must have been mighty stressed out in picking a name. Eleanor Roosevelt, Nancy Pelosi, Ruth Bader Ginsburg, and Margaret Thatcher have all made appearances in Ben and Leslie's role-playing in the bedroom (as we know from Ben pocket dialing Ron). Besides being a fan of Hillary Clinton, Leslie also has framed photographs of Sandra Day O'Connor, Michelle Obama (who Leslie got to meet!), Condoleezza Rice, Janet Reno, Pelosi, and Madeleine Albright in her office. Not only is the name Madeleine beautiful, but Leslie almost didn't go out with police officer Dave (Louis C.K.) when he mistakenly thought the photo of Albright was Leslie's grandmom (and he didn't know who Albright was). So, it would be only fitting to name her daughter after the first female Secretary of State.

The middle name was also tricky. Although I'm sure Leslie would have loved to name her daughter after her tropical fish best friend (and other life partner) Ann Perkins, Ben needed to be represented in the name. (Although isn't Madeleine Ann just lovely?) And not that Leslie would hold it against her, but Ann's son Oliver Perkins Traeger was not influenced by Leslie at all.

So, we go back to Ben's nerd-loving self with the name Leia, after Princess Leia from Star Wars (obviously). It may be particularly cruel since Princess Leia will return to theaters right when little Madeleine is growing up for Star Wars: Episode VII, but since it's her middle name, nobody should even know to ridicule her. And just imagine her long blonde hair in Princess Leia buns... Too damn cute.

The chances of Ben and Leslie actually naming their children these names are pretty slim, but I'm hoping that even one of the names is partially right. It is Parks and Rec — where they perfectly blend reality with ridiculousness.